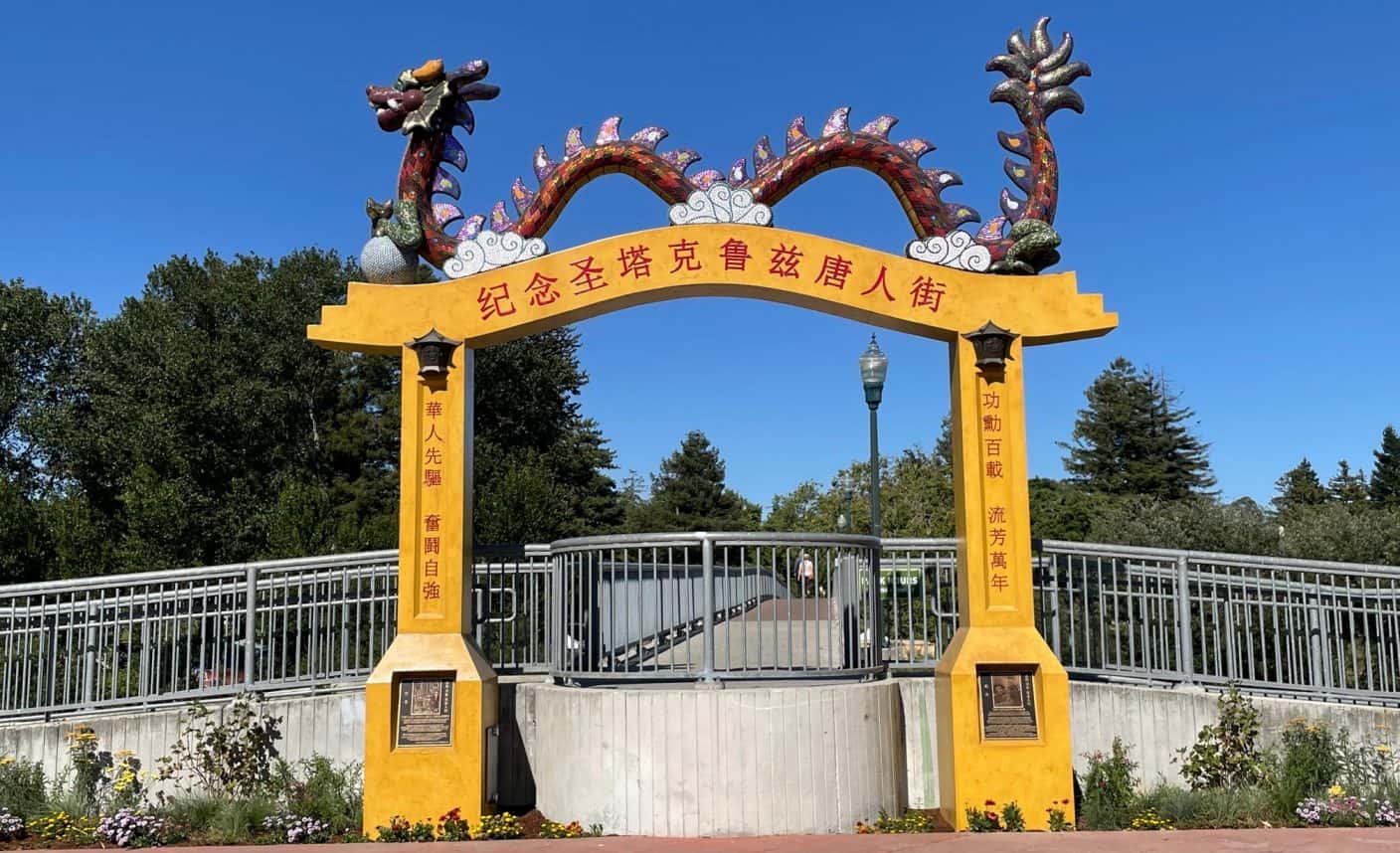 Abstract:
Public history has often been conflated with local history and as such has been seen as less significant than forms of history that speak to larger global forces and events. In the following weeks, we present three articles that feature transnational approaches to public history that also speak to local terrains and our contemporary moment. At the same time, each of the essays considers how transnational public histories, in response to crises—ethnic violence, systemic racism, and pandemic—force us to think critically about historians’ fraught relationship with “presentism.”
DOI: dx.doi.org/10.1515/phw-2021-18599.
Language: English


The dragon gate sits on the sidewalk edging Front Street in Santa Cruz, California, just up the bank from the San Lorenzo river. Its posts and ribboned lintel are bright yellow and a vibrantly colored, mosaic dragon perched on small clouds curves along the top. Unlike San Francisco, 61 miles to its north, Santa Cruz is not often associated with Chinese-American history. But four Chinatowns existed in Santa Cruz, each with its distinct location and history, the last of which was destroyed by flood in 1955.

Chinese immigrants arrived in the United States, largely before the 1882 Chinese Exclusion Act, to mine, build railroads, work in factories, in homes, and in fields. A bronze plaque describes the significance of the marker,

“this Chinese dragon gate commemorates…the often forgotten history of Chinese immigrants in Santa Cruz, County. The Dragon–a symbol of power, strength, and good fortune in Chinese culture–pays homage to the tenacity, endurance, and ingenuity of those who survived in Santa Cruz despite persistent anti-Chinese racism and hostilities. It also honors both their spirits and their descendents who still grace and enrich this community.”

Above the text is a reproduction of a photograph of a boy and an older man who seem to fit the multi-generational intent of the dedication. The same photograph graces the cover of the book Chinatown Dreams, which contains photographs by George Lee of Santa Cruz’s Chinese residents for decades beginning in the 1940s. In Lee’s photograph from 1948, the young boy holds a can of condensed milk in his hand, a sugary, candy-like treat, and the older man has lovingly tucked his hand around the boy’s arm. The boy is George Ow Jr, the photographer’s nephew, and this child, who is now the age of the older man in the photograph, helped to make the dragon gate, installed in 2020, as a tribute to the Chinatown that he knew as a young boy and to men like Ah Fook who is pictured with him.

Reminiscing about his childhood and the resilience of men like Fook, George Ow Jr. affirmed the connections Fook was able to make, despite the anti-immigration, anti-miscegenation, and anti-land ownership laws that kept Chinese men like him from having families of their own. Ow acts as a virtual nephew to Fook in the photograph, and the dragon gate is Ow’s act of honoring and remembering people like Fook and the contributions of their labors. That same photograph is also included in a small exhibit on Santa Cruz’s Chinatowns in the Museum of Art and History (MAH). As the panel text for the exhibit states, “Racism didn’t just impact Chinese residents of Santa Cruz County in the 1800s. It affects what we remember of them–or don’t–today.” The dragon gate and the MAH exhibit seek to correct that erasure.

The price of forgetting local history is steep, and the white supremacism that continues to portray Asian and American as incompatible also continues to fuel violent attacks. Over the past year in the United States, we have seen a horrifying resurgence of anti-Asian and anti-Asian-American violence. The organization Stop Asian American Pacific Islander Hate released a national report citing 3,795 hate incidents recounted to them from March 19, 2020 to February 18, 2021. Of those, over 11% are physical assaults, and hate incidents are reported by women 2.3 times more than men. Incidents have been reported from every state in the union.

The Contributions to the July Issue

In the following weeks we present three articles that address the emergence of transnational approaches to public history, a field that, at least in the United States, has long been predominantly local. At the same time, each of these essays considers how transnational public histories, in response to crises—ethnic violence, systemic racism, and pandemic—force us to think critically about historians’ fraught relationship with “presentism.”

Melissa Brzycki and Stephanie Montgomery discuss the motivations behind their production of a podcast on the history of East Asian popular culture, East Asia for All. Modeling their own practice on the response of young scholars of Asia during the Vietnam War, the Committee of Concerned Asian Scholars, Brzycki and Montgomery highlight an apparent paradox in the United States. On the one hand, Asian popular culture—including media, games and food—is consumed prolifically in the United States. On the other hand, Asians and Asian Americans continue to be subject to systemic racism, violence and erasure, with alarming spikes of incidents during the COVID-19 pandemic. In their podcast, Brzycki and Montgomery develop a transnational public history approach by examining the historical conditions of popular cultural production in East Asia and connecting them to the conditions of consumption and appropriation in the United States. Their essay, like their podcast, constitutes a dual call. Even as Anglophone historians of regions outside the U.S. need to engage their domestic audiences, these historians also have an imperative to interrogate their own historical and systemic inequities in the production of knowledge. For Brzycki and Montgomery, therefore, the practice of transnational public history, especially in the context of crisis, offers a vital setting for critical self-reflexive connections between subject matter, audiences, and knowledge-makers.

Three authors, Dustin Wright, Lex McClellan-Ufugusuku and Drew Richardson, address the potential for the emergence of transnational audiences for public history. In December 2020, the Okinawa Memories Initiative hosted an online event commemorating the 50th anniversary of the Koza Uprising, a violent response by Okinawans to repeated harms perpetrated US military personnel, and a strong conviction on the part of the participants that justice for Okinawans had been systematically denied. Through interviews with an eyewitness to the uprising, a U.S. Army veteran who experienced an ethnic identity awakening while stationed in Okinawa just prior to the Uprising, and two members of the Okinawan community in diaspora, the online event invited a multinational audience to consider an incident on a small island under U.S. military occupation as a part of their own local histories. The Koza Uprising event took place in the seventh month of nation-wide (and worldwide) protests in the wake of the murder by Minneapolis Police of George Floyd. As such, a remembrance of a pivotal event protesting the lack of accountability of US military forces in Okinawa spoke as well to the protests against the lack of accountability of policing of black and brown communities in the U.S. As with Brzycki and Montgomery, the articulation of the past into the crises of the present moment played an important role.

The next author, Susan Hogervorst, considers a different dimension of the “presentism” in public history evoked by Brzycki and Montgomery in her essay on COVID-19 collections around the world. As she observes, the COVID-19 collections function as “responses” to the immediate crisis in a historical consciousness that values preserving the present for the present. This impulse upends the professional role of historians to determine after the fact what has preservation value, and is both a phenomenon of “accelerated memory” and “a democratic conception of heritage.” But the Corona collection phenomenon the author writes about is also a transnational event in a global pandemic. This raises another challenge of the transnational frame for traditional collections of local historical experience: the same kinds of artifacts keep emerging worldwide. Does the commonality of global experience undermine the value of specific local collections? Can the specifically local collection maintain its unique value in the face of global commonality? The Corona collections phenomenon raises fascinating questions for negotiating the relationship between the local and the transnational particularly when related to global crises.

« Missing Pictures? Towards an Alternative Visual History of 1989
Past & Presentism: Podcasting as Historical Work »