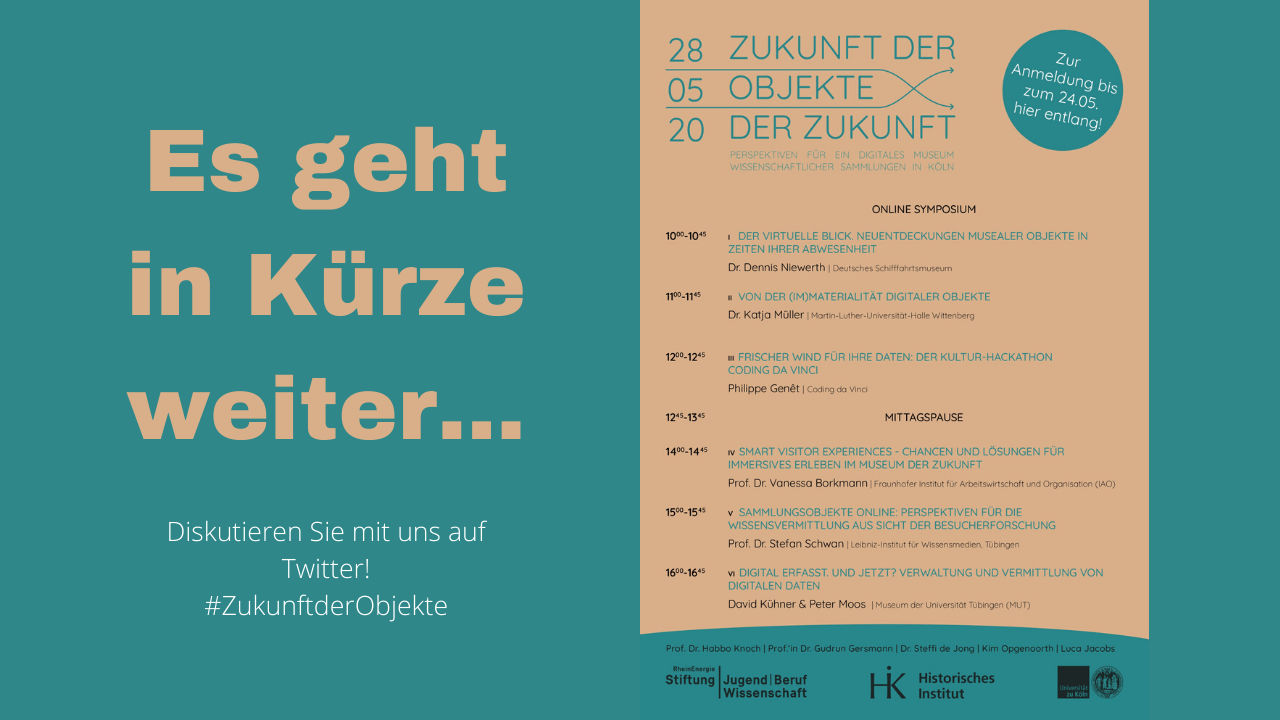 with Kim Opgenoorth and Luca Jacobs

Abstract:
This paper examines how conferences and symposiums can be organised in the digital space. The authors provide the example of the symposium on the research project The Future of Objects—Objects of the Future, which originally was planned to take place in Cologne in May 2020 and which had to be moved to the digital space due to the outbreak of Covid 19. Following the sociologist Bruno Latour, the paper discusses the impact of the technical circumstances of an online symposium (‘delegation’) on the behaviour and social experiences of the participants (‘prescription’).
DOI: dx.doi.org/10.1515/phw-2020-17078
Languages: English, German


When we started analysing the state of digitisation of collections in Cologne in September 2019 for the research project The Future of Objects—Objects of the Future: Digitisation of Historical Collections in Cologne, conceived by Habbo Knoch and Gudrun Gersmann, nobody could have foreseen that within a couple of months, the only space in which we would be able to contemplate objects from those collections would be the digital one.[1] Furthermore, nobody could have known that we would not be able to organize the symposium that we had planned for May 2020 in the form of a physical get-together in Cologne.

The Lack of Precedents

Like many colleagues, we were confronted with the following question: Should we cancel or postpone the whole event, or should we try to organise it into an alternative, digital form? We quickly decided on the latter option, which led to the next problem: How does one actually organise a symposium in the digital space? With this blog entry, we would like to share what we learned and hope to initiate a similar exchange of experiences, as can already be observed for digital teaching.[2]

We quickly realised that—at least regarding the discipline of history—there were hardly any precedents for our approach at the time. Collections and museums reacted to the lockdown in the blink of an eye, coming up with creative digital offers. Universities and schools moved to digital teaching within weeks. Conferences, however, tended to be cancelled rather than reconceived.[3]

Despite the experimental character of our initiative, the presenters reacted in a very enthusiastic way when we informed them about our decision at the end of March. Spurred on by this positive feedback, we started searching for the appropriate technology and format. Originally, we had planned a symposium lasting one and a half days that would encompass three panels with two presentations each—as well as, naturally, the obligatory dinner and convivial coffee breaks. Would we manage to transfer the social aspect of the symposium to the digital space? What influence would the technology have on its character?

Bruno Latour once referred to the “transformation of a major effort into a minor one” via its transfer to a non-human actor as “delegation”.[4] Each delegation brings with it a “prescription”—an adjustment and adaptation of the human actors to this delegation.[5] It was whilst planning and implementing the symposium that we would find out what this would mean in practice. After numerous discussions, we decided to limit the symposium to one day and to six panels of 45 minutes with shorter presentations of 15 to 20 minutes and a maximum of 15 participants each. We thought that we could only manage to have a good discussion with a limited number of participants and that people would get too tired if the symposium lasted longer than six hours.

Whilst organising the symposium, the video conference tool Zoom met with a lot of criticism because it did not meet data protection regulations and was regularly attacked by trolls—so-called “Zoombies”. However, since Zoom tried to fix those problems and since there was no encrypted alternative that allowed for a stable connection, we “delegated” part of the organisation of the conference to Zoom. We did however implement some measures in order to prevent disturbances by uninvited guests. Thus, we arranged a new Zoom meeting for each section. The participants had to register with their proper names and were only allowed to enter from outside the “waiting room” once their name had been checked. Whether these precautionary measures were all necessary is debatable in hindsight. Whilst in particular, the setting up of six different meetings heightened the number of errors, advanced Zoom settings, in principle, leave enough options to block uninvited guests.

For the registration, we decided to work with Doodle. With six panels and the possibility of multiple registrations of the same person, a registration via e-mail would quickly have become confusing. Moreover, Doodle allowed us to automatically limit the number of participants.

Within one and a half days, we had acquired the planned number of participants. We therefore decided to increase this number to twenty-five. Moreover, with the technical support of the University of Cologne, we established a connection between Zoom and the university’s YouTube channel. This allowed us to offer a livestream of the symposium.[6] As a back-up, we recorded each section on Zoom. Both decisions required us to get the participants’ agreement in advance. Moreover, we created the Twitter account @ZukunftObjekte.[7] In this way we could present our programme and announce the livestream, as well as establish a connection to the participants and the presenters even before the symposium.

Finally, we had managed to bring all the participants together on the same screen and to assembled all those who were interested in front of the livestream. But how would we reproduce the social get-together at the cookie buffet and the whispering amongst the clinking of coffee mugs? In order to allow for things to run smoothly, we decided for each section to be taken care of by three of us in the respective functions of host, co-host, and technician on a rotating basis. The host introduced the presenters and led the discussion. The co-host had the function of “host” on Zoom. They opened the meeting, performed a technical check-up with the presenter, started the livestream and the recording, let the participants enter, and followed the discussion on Twitter and in the chat. A student assistant was responsible for solving the participants’ technical problems. For this purpose, we had established a special e-mail address. In addition to this, we communicated amongst each other via a chat group. This allocation of tasks worked surprisingly well, though it also required a high amount of concentration.

In the sections, we tried to establish a social character by allowing everybody to greet each other before we turned off the microphones. We would only turn them on again for the discussion. The participants could decide themselves whether they wanted to use the video option—most of them did so. The participants of the Zoom meetings could discuss orally or use the chat, although the latter was hardly used by anybody. It was also striking to us that the discussion became less intensive over the course of the day.

It was on Twitter where the social/active character of the symposium would present itself most poignantly. We encouraged all participants and the viewers of our livestream to use the hashtag #ZukunftderObjekte for discussions, informed them about research results, and created space in our Zoom meetings for the questions from Twitter. This allowed us to connect with many people who were interested in the same topic. Additionally, the hashtag provided the possibility of modern archiving and allowed for all the results and information about the event to be accessible in the future.[8]

So, what is our conclusion? Would we organise another symposium online? And, if we were to, what would we change? For one thing, we learned that—in the sense of Bruno Latour—we, as well as the presenters and participants, had to learn new methods and take on new tasks due to the delegation of a certain amount of the duties to the non-human actor Zoom. Interestingly, as a result, we consulted even more non-human actors such as Doodle or chats. Therefore, even if no hotels have to be booked and no refunds of travel expenses settled, digital symposia are not necessarily less complex than analogue ones.

Moreover, the social character definitely ended up suffering. After the symposium, we realized that we should have organised breakout rooms for coffee breaks for casual conversations. This would have given us a space for a social get-together and the development of new ideas outside of the actual panels.

We would further opt for breaks that last longer than 15 minutes. Concentration seems to fade more quickly in the digital space. In addition to this, one of the few technical problems that we encountered was that some Zoom sections could not be opened without closing the previous ones (we still have not fully understood the technical reasons for this). On one occasion, we unintentionally cut off a presenter while she was speaking. Longer breaks would have allowed changes between sections to run more smoothly.

Nevertheless, we found that online symposia are a good alternative for occasions in which participants cannot or do not need to meet in the physical space. Moreover, we managed to reach a much larger interested audience than would have been possible with an analogue event. Up till now, the livestream has had 1,061 views. On the day of the symposium, between 40 to 60 viewers followed the different panels according to YouTube statistics. On the weekend after the symposium, the discussion continued on Twitter. All of this was a positive surprise and exceeded our expectations by far.[9]

Opening screen of the livestream of the symposium Future of Objects © Janek Cordes and Luca Sebastian Jacobs.

« Fighting Truth with Facts
Once the Statues are out of Sight? »