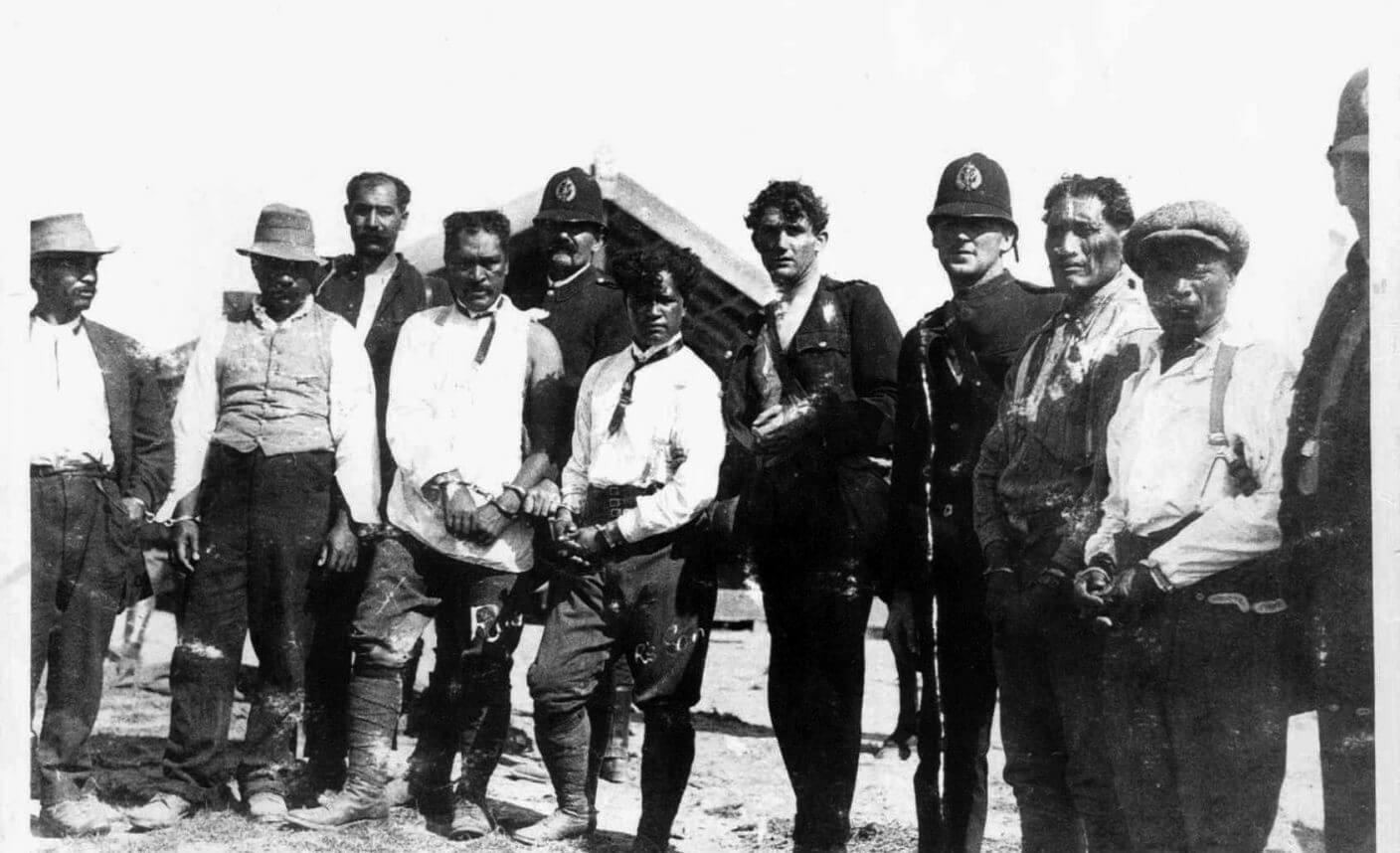 Abstract: In the high-autonomy, nonprescriptive curriculum environment that operates in New Zealand, it is history teachers who are charged with the responsibility of engaging young people with controversial aspects of the past. While this model allows for some innovative teaching programmes, it also works to hamper the extent to which young people learn about the traumatic nature of colonisation in this country and contemporary efforts to address the legacy of the past.
DOI: dx.doi.org/10.1515/phw-2017-8094.
Languages: English, Deutsch


In the high-autonomy, nonprescriptive curriculum environment that operates in New Zealand, it is history teachers who are charged with the responsibility of engaging young people with controversial aspects of the past. While this model allows for some innovative teaching programmes, it also works to hamper the extent to which young people learn about the traumatic nature of colonisation in this country and contemporary efforts to address the legacy of the past.

What are the implications of a high-autonomy, non-prescriptive history curriculum for engaging young people with controversial and contested features of the past? New Zealand has something important to say to us about this question. Although the last 30 years have seen the country working to address the traumatic legacy of the colonisation for indigenous-Maori[1] on a range of levels, the curriculum does not prescribe historical knowledge and teachers have the autonomy to shape their history programmes around the interests of their students. While this has seen some innovative teaching programmes[2], it also largely inhibits history teachers from engaging young people with critically informed understandings of controversial questions about the experience of colonisation. This not a reflection of a post-colonial mind-set that, until recently, saw history teachers largely ignore New Zealand’s past[3], but rather that teachers are embedded in particular school communities and the memory messages that are often dominant in such settings are hostile to engaging with the controversial nature of colonisation.

Curriculum choices about history do not occur in a vacuum and teachers do not operate as autonomous entities when it comes to curriculum making. Schools are self-managing (and have considerable say over what is taught) and teachers’ curriculum approaches to controversial historical questions will reflect the values, attitudes and collective memories of parents, students and colleagues in their school community.

The colonisation experience is among the most controversial features of New Zealand’s history. The wars fought between the Crown and Maori in the mid-19th century shattered the cohesiveness of many tribes; by 1900, the majority of Maori land been alienated and the population was less than half of what it had been when European settlement began.[4]

Since the 1980s, there has been an increasing commitment to confront historical grievances, and the relationship between Maori and non-Maori is now based on the bicultural framework of the Treaty of Waitangi.[5] All government departments are required to consult with Maori over matters that concern them, and the Waitangi Tribunal (a government-funded body) is responsible for investigating historical claims, made by Maori tribes, of wrongdoing by the Crown in the nineteenth century (with the aim of redress for past injustices).

In the context of New Zealand as a bicultural society that is in the process of addressing historical grievances, it could be assumed that history teachers would prioritise questions regarding New Zealand’s controversial past and that their school communities would be supportive of them doing so. However biculturalism is a more contested question than it appears, which has implications for the extent to which teachers can operate as autonomous curriculum makers.

For example, the Hobson’s Pledge lobby group includes a number of influential New Zealanders who reject the notion that Maori have unique status and that the Treaty (or the Waitangi Tribunal) has any place in contemporary New Zealand society.[6] Hobson’s Pledge claims that ‘we are all New Zealanders’ and warns that biculturalism is leading to racial divisions and ‘irreversible separatism’.[7] These ideas are not new. They emerged as a potent force ten years ago when Maori claims to New Zealand’s seabed and foreshore[8] divided the country.

The views of Hobson’s Pledge were echoed in submissions to the Maori Affairs select committee that heard the recent student-initiated petition that called for the colonial wars of the 19th century to be included in the curriculum. Whilst the petition was supported across the political spectrum by all main-stream parties (and 23% of submissions supported the initiative), the majority of almost 200 submissions (75%) were vehemently opposed. These submissions typically ignored recent research on colonisation. They claimed the petition was playing on the guilt of Europeans for the treatment of Maori in the past, fostering racial division and drawing on misleading, selective, ‘politically correct’ views of the past.[9]

The Harmfulness of Curricular Autonomy

The cultural memory messages that informed these submissions (and Hobson’s Pledge) provide an insight into the challenges that teachers as curriculum makers face in engaging their students with controversial aspects of New Zealand’s past. It illuminates a largely unsympathetic perspective of the Maori experience of colonisation that shapes thinking in many school communities and that is seldom evident in official channels.

The colonisation experience in New Zealand is a sensitive, complex and highly politicised issue about which there is no agreed consensus. The selective memory narratives that shape opposition to biculturalism are not based on detailed knowledge but, rather, are framed by ‘generalised structures … with the same basic plot’. These are used to provide a simple, clear, uncontested version of the past that reinforces the values, attitudes and collective memories of a particular community.[10]

In this context, the high-autonomy model mitigates against young people developing an understanding of the traumatic experiences of colonisation. In many schools, teachers are not sufficiently confident in their knowledge of controversial features of the colonial past and/or not well supported by their school community to address such questions. The high-autonomy, non-prescriptive curriculum model works against young people developing the sort of knowledge-based understandings of the colonisation that would equip them to operate successfully as critical citizens in a bi-cultural nation that places a high priority on reconciling the relationship between indigenous-Maori and non-indigenous New Zealanders.

_____________________
[1] Maori are the indigenous, first inhabitants of New Zealand who are the descendants of Polynesian settlers who arrived approximately 800 years ago. New Zealanders who claim Maori ancestry currently make up around 10-15% of the country’s population.
[2] Michael Harcourt and Mark Sheehan (eds.), History Matters: Teaching and Learning History in 21st New Zealand (Wellington: NZCER Press, 2012).
[3] Mark Sheehan, The Place of ‘New Zealand’ in the New Zealand History Curriculum. Journal of Curriculum Studies 42 (2010), 671-691.
[4] Vincent O’Malley, The Great War for New Zealand: Waikato 1800-2000 (Wellington: Bridget Williams Books, 2016).
[5] Signed first at Waitangi, in the north of New Zealand, in February 1840, the Treaty of Waitangi was a pact between the British Crown and Maori chiefs. Maori ceded sovereignty to the British in return for guarantees that they could retain particular privileges and rights over their lands and fisheries. The Treaty was signed prior to the widespread British colonisation of New Zealand. In 1840, there were fewer than 2000 Pākehā in New Zealand and around 120-150,000 Maori. However, the Treaty did little to protect Maori from the worst effects of colonisation.
[6] http://www.hobsonspledge.nz/ (last accessed 1. December 2016).
[7] http://www.hobsonspledge.nz/ (last accessed 1. December 2016).
[8] Maori claims to the foreshore and seabed were based on a 2003 Appeal Court decision that the foreshore and seabed were ‘land’ and that, under common law, Maori tribal groups who had continuously occupied coastal regions since 1840 could make a claim to the Maori Land Court for title. It was an especially divisive issue that saw the government legislate to disallow these claims being made.
[9] http://www.parliament.nz/en-nz/pb/sc/make-submission (last accessed 1. December 2016).
[10] Wertsch, James V. “Collective Memory and Narrative Templates.” Social Research 75, No 1. (2008): 133-156, p.140.