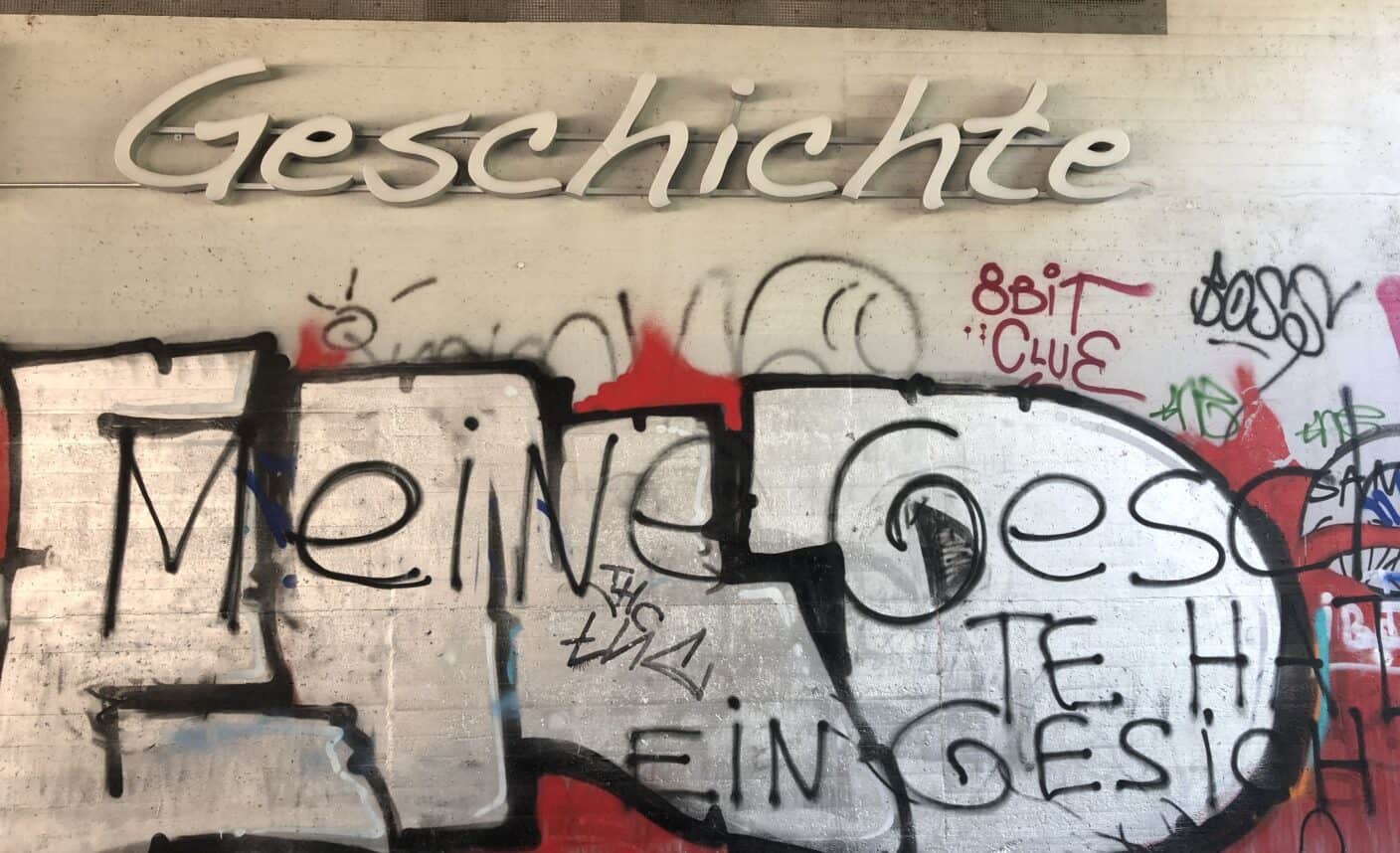 Abstract:
Artistic-aesthetic forms of expression and history in the public sphere are interlinked in more or less obvious ways. In historical cultures, a specific approach to these networks of relationships is still dominant, one that – retrospectively – examines existing material representations in search of historical evidence. But the manifold entanglements can be analysed more precisely if, e.g., the focus is shifted to perspectives of the artists involved.
DOI: dx.doi.org/10.1515/phw-2022-20323
Languages: English, Deutsch

See the corresponding PHW Focus Interview with the author


Nowhere are the links between history and aesthetics more apparent than in relation to material culture from the past, which consists of far more than just monuments, however broadly this term is applied. But art does not emerge in a vacuum either: artistic production processes and practices are embedded in political and social contexts and can often be traced back to a specific interest in individual or shared pasts.

Today, traditional rituals and manifestations of memory cultures are often accused of speaking to the public with a pedagogical voice and thus from “above”. This is especially true for material culture such as monuments, which explicitly make artistic-aesthetic claims. In many cases, however, neither their historical nor their aesthetic references can be “read” by later generations. Which stories these works of art and aesthetic representations are intended to tell or capable of representing in public space thus remains largely an open question.[1] At present, memory cultures, and the arts more generally, are moving from more or less “imposed” official memory to forms of participatory remembrance. In this regard, current entanglements between aesthetics and history stand for the necessary dialogue between art, historiography, and the public[2] – disputes and debates included.

The title of this issue follows the book Anthropology and/as Education, which was published by the British social anthropologist Tim Ingold in 2018.[3] Our aim, similar to Ingold’s, is to irritate and, to put it plainly, to think purposefully outside the box. Until now, arts and aesthetic practice have been largely left out of the context of public history. In most cases, they have been simply overlooked. Yet questions of aesthetics and aesthetic practice do play an important role in this area. The historical theorist Jörn Rüsen already noted this in the 1990s. At that time, he had distinguished three dimensions of historical culture: the cognitive, the aesthetic and the political. In 2013, he expanded these three dimensions, which could almost be called “classical”, with the addition of two more: the moral and religious.[4]

The question of linking history and aesthetics is thus not a new one, but perhaps one that has received too little attention so far. After all, aesthetic practice enables creative scope in dealing with history – a factor that is particularly important for public history. In the words of cultural anthropologist and museologist Thomas Thiemeyer: “Only aesthetically prepared history generates imagination, can convey its meaning.”[5] In this spirit, the time is ripe to address the entanglements between aesthetics and public history.

The contributions in this issue deal in different ways with the question of what can or does happen when historical-memorial-cultural aspects and artistic-aesthetic approaches mix and mingle, letting the material or at least (audio-)visually documented “products” of this connection become the subjects of public debate. The various articles do not deal primarily with specific contents. Rather, they are concerned first with questions of the (re)presentation of history, which frequently focus on issues of media, second with the artistic-aesthetic nature of the “products” dedicated to the past, third with practices of making and performing involved in their production, and fourth with the varied relationships that the actors involved have with history.

The use of the term aesthetics – or art – in the following operates within a broad understanding of the field, including all conceivable connections between history and the arts, such as theatre, performance, literature, music or the visual arts, which are to be analysed from the perspective of cultural studies. Special attention is paid to social and cultural theories of practice. These seem well suited to contribute to a (more) adequate description of the relationship between artistic and historiographical practices.

Historians tend to neglect genuine artistic-aesthetic aspects in their explanatory approaches, an obstacle that can be traced back to their déformation professionelle. The information necessary for historical work concerning art, artistic movements, styles, and fashions, but above all artistic practice and the production processes of art, is usually taken from specialized handbooks – and this means it is acquired second-hand. Although often unavoidable, this form of non-dialogue, especially when art is discussed in the context of memory culture, can lead to a reduction of content, misunderstandings, or even misperceptions. As a rejoinder, in some of the articles within this issue, the artists themselves will have their say and report on the meaning of history for their own artistic-aesthetic work. In addition to the publicly accessible aesthetic “products”, the production of art will thus also be examined more closely.

In the 21st century, the arts do not exist in pure forms, but as hybrids. This development has been directly related to the phenomenon of new media art for around three decades.[6] Entanglements between individual art forms – and, as a direct consequence, between art and science or individual academic disciplines – are thus an important feature of contemporary art.[7] To speak of entanglements that have already taken place, that may even be called necessary, is to accept that boundaries, though they still exist, have already become (more) fragile or permeable. Hybrid forms, however, are also to be found in the institutions involved in the public presentation of art and thus also in the (exhibition) venues. As a consequence, the arts must constantly redefine themselves both in their relationship to each other and to art as a whole. The necessary analysis of the entanglements between aesthetics and public history thus presupposes a fair amount of willingness to engage in dialogue and the courage to reflect on one’s own theoretical and practical premises.

Contributions to the September Issue

Sønke Gau, Simon Graf and Florian Wegelin deal with “tank barriers” as material legacies of wars and violent conflicts. Their focus is on fixed anti-tank obstacles in Switzerland that either survived the Cold War, or whose remaining components were repurposed for use in everyday life. Analysing historical relics that were placed in aesthetic contexts or aesthetically “upcycled” in different ways, the authors argue that aesthetic approaches and practices also have (strong) effects on the historicity of the objects.

Anna Langenbruch focuses on the interaction of music and history and asks what happens when artistic and historiographical approaches – each with their own concerns, rules, habits and afflictions – coincide. With a particular interest in how people use and understand musical practices as historiography, the author examines with reference to 18th century France how music changes the design, perception and interpretation of public history – and vice versa. Composing, singing and performing the past thus turns out to be a historical practice in itself.

Philipp Lachenmann addresses the significance of social and political aspects of the aesthetic-artistic process. Questions concerning memory culture arise, for example, in connection with works that draw on the fund of collectively shared visual worlds. He focuses on two video works: The first revolves around personal and public contact zones of historical events. The second follows the demolition/reconstruction of a public building in Istanbul (Turkey). Both examples emphasize emotional aspects of historical references that would otherwise remain hidden in the “dry” source material.

Telemach Wiesinger‘s contribution deals with an approach that has shaped the history of photography in both theory and practice – stereoscopy or stereoscopic photography. His award-winning experimental film “1:1” refers to the work of the German photographer Giorgio Sommer (1834–1914) who, living and working in Italy, was famous first for contemporary photographs of catastrophes such as the eruption of Mount Vesuvius in 1872 and later for replicas of ancient works of art. In the form of film poems, the author explores the possibilities of the “double image” – and therefore of perception as a subjective construction in the field of tension between still and moving images.

Christopher Sommer looks at the relationship between the gargantuan and the diminutive in military history museums. The awe-inspiring dimensions of war machines are in tension with the overview representation of thousands of soldier figurines in many dioramas. At the same time, the aestheticization in museums bears the danger of taming war as an experience. Sommer argues for a responsible approach to these techniques in a museum field that is increasingly opening up to critical perspectives.

“Bridge pier alongside the river Neckar in Mannheim-Neckarstadt”. © Photograph by Cord Arendes, May 11, 2022 (personal property).