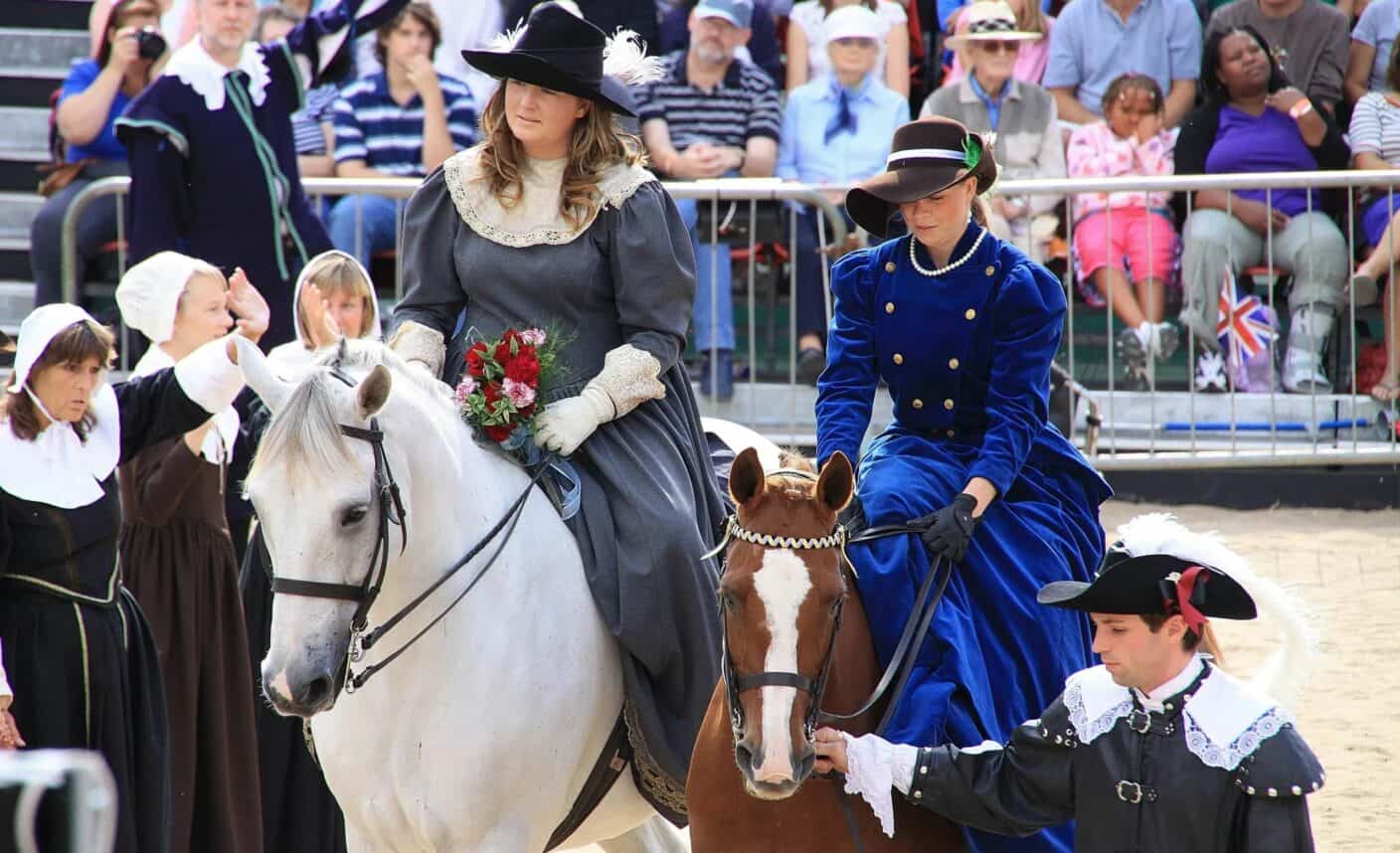 Abstract: This article looks at the tradition of historical pageants in Britain. Once a widespread and popular form of engagement with the past, this phenomenon has declined, but not wholly died out. We explain the history of pageants, and the ways in which professional historians responded to them, and draw attention to surviving examples of historical pageants today. The article is based on an Arts and Humanities Research Council project, “The Redress of the Past: Historical Pageants in Britain”.
DOI: dx.doi.org/10.1515/phw-2022-19577
Languages: English


How do people and communities understand their histories? And how should historians work with local communities in partnerships that sustain popular engagement with the past? We have been thinking about these questions for some years on a research project, “The Redress of the Past: Historical Pageants in Britain”. The project examines how and why historical pageantry has waxed and waned since the 1900s, and what participation meant to those who organised, wrote, performed in and watched them.

Often performed outdoors with hundreds or even thousands of volunteer performers, historical pageants were prominent instances of popular engagement with the past in Britain for much of the twentieth century. We have been asking why so many people dressed up in historical costume and performed in them, often in the rain. What motivated the armies of volunteer costume-makers, the hundreds who gave their time to steward pageants, to market and advertise them, and often to add their names to lists of financial guarantors in case their pageant lost money? How and why did the choice of historical episodes change over time? What were the commercial dimensions of pageants? What was the educational value of a performed version of the past?

The Heyday of Pageants

The “mother of all pageants” was staged amidst the medieval ruins of Sherborne Old Castle by the impresario Louis Napoleon Parker in 1905, after which communities large and small across the country were gripped by a wave of “pageant fever”. Most pageants followed Parker’s format: a series of episodes from local history, organised chronologically, and featuring lavish costume and a whole range of commemorative souvenirs. At Sherborne, the action began with the foundation of the town by St Aldhelm in 705, and included the Anglo-Saxon defeat of the Danes, a visit by Sir Walter Raleigh in 1593, and much else besides. There were 800 performers, and the show was watched by some 30,000 over the course of its week-long run. Subsequent pageants were even larger: at Winchester in 1908, the cast amounted to 2,000, and at one of the performances the audience numbered 8,000.

After a hiatus during the First World War, historical pageantry resumed and flourished through the 1920s and 1930s. The format spread to large industrial towns: there were pageants in Manchester in 1926 and 1938, the latter with 10,000 performers and an audience of 80,000 across a ten-show run. It featured episodes ranging from Roman times to the opening of the Manchester Ship Canal in 1894, and was accompanied by sideshows of all sorts, including – topically enough – a demonstration of air raid precautions. This was a reminder that pageants, although concerned with the past, were performed in the present. Many northern English towns underlined their orientation towards here-and-now concerns by producing pageants in association with industrial exhibitions. Pageants also took place in country houses and small villages.

After the Second World War there was another sustained outbreak of pageant fever, as large pageants took place in the late 1940s. The most notable was at Arbroath in Angus, where a series of pageants commemorating the 1320 “Declaration” of Arbroath was initiated in 1947. From then until 2005, the Arbroath Abbey Pageant was staged no fewer than 18 times, a unique frequency for an undertaking so large that few places attempted it more than once in a generation. In 1951 and 1953, in association with the Festival of Britain and the Coronation of Elizabeth II, yet more pageants were staged up and down the country, again with huge casts and sometimes very large audiences. By now pageants increasingly featured local economic and social history alongside, or instead of, the staple diet of kings, queens and pitched battles that had often been centre-stage in the early days.

Pageants and the Professionals

Many professional historians disliked pageants, seeing them as inauthentic and trivialised versions of the past, littered with accidental or deliberate errors and blending fact and fiction in misleading ways. The medievalist J. H. Round was particularly hostile, calling pageants “travesties” and singling out Parker’s 1908 Dover pageant for particular criticism. Here, as in many places, King Arthur was featured in the pageant, as was a fanciful portrayal of the town’s resistance to William I in the wake of the Norman conquest. Other fictional or semi-fictional heroes such as Robin Hood were often depicted, and episodes such as “The Dawn of History” at Birmingham in 1938 featured a fire-breathing dinosaur (“Egbert”) doing battle with fur-clad cavemen. Round had plenty of ammunition to support his derisory comment that pageants were “travesties of history”.

Others, though, saw things differently. Some professional historians – Charles Oman and G. M. Trevelyan are examples – were strong supporters of pageants, with Trevelyan writing part of the Berkhamsted pageant of 1922, and even acting in it himself, taking the role of Geoffrey Chaucer. At Arbroath, the leading Scottish historian Agnes Mure Mackenzie, author of a series of school textbooks, was heavily involved in the Abbey Pageants until her death in 1955. Many local historians and antiquarians, who often carried out painstaking research in archives and record offices, wrote the scripts and eagerly promoted their pageants as opportunities to interest a wider public in their local past. Pageants reached huge audiences, and many people remembered them as far more engaging than the history that they learned in school, or indeed anywhere else.

By the late 1950s the popularity of pageants had fallen, as new forms of popular engagement with history took root. Television and the motor car changed patterns of historical “consumption”: period drama series and visits to stately homes and castles brought people to the national and local past in new ways. The tradition, though, never quite died out, and even during its decline a few places stood out as bucking the trend. The Arbroath Abbey Pageant was revived every few years and gained new significance in the context of the growth of Scottish nationalism through the second half of the twentieth century. Meanwhile, in Axbridge – a small town in Somerset with no previous history of pageanteering – a pageant was staged in 1967 to celebrate the opening of the town’s bypass. It was put on again in 1970, and has been performed every ten years since, gaining in size and profile each time.

There were mini-revivals of historical pageantry elsewhere around the time of the queen’s silver jubilee in 1977, and at the millennium. From 2016, a large-scale pageant entitled “Kynren” has been staged on weekend nights throughout the summer at Bishop Auckland in Durham: with volunteer performers and spectacular audio-visual effects, Kynren takes the audience on a rapid journey through English/British history. Promoted by the philanthropist Jonathan Ruffer, Kynren is part of a wider series of developments intended to attract tourists to Bishop Auckland, and has generated considerable media interest.

Redressing the Past Today

When we started work on “The Redress of the Past”, we thought of pageants as a phenomenon of the twentieth-century past, but it has become clear that in some places they are alive and well today. Kynren is the biggest example, but we have worked with local organisations in places that are keeping the tradition going for a present-day audience. In Arbroath, for example, although the pageant has not been performed since 2005, one was planned for the septuacentenary of the Declaration in 2020. The Covid-19 pandemic put paid to this, but there may be a performance in 2022 instead.

In the south-west of England, the decennial pageant planned for Axbridge in 2020 did not take place, again due to the pandemic. However, it will be performed in the town square during the August bank holiday weekend in 2022. For the third time, the artistic director is John Bailey, who (with Harry Mottram) has “reshaped” the original script and insists that scenes should “accurately reflect the past”. He has sought, in his words, “to increase the role of real characters from all our yesterdays and to present a people’s history – rather than a simple procession of kings and queens”. The organisers of the pageant have a strong sense of Axbridge’s place in a longer-standing tradition of historical pageantry, and there is huge local enthusiasm for the pageant. For Bailey, the pageant is a historical performance of great value in itself, but also a means of “bonding” the community.

There are revivals of pageants elsewhere, too. In the City of London, 17 and 18 June 2022 will see the Becket Pageant for London in Guildhall Yard, EC2. This is inspired by a sixteenth-century pageant celebrating the life of a local boy made good – and former patron saint of the City – Thomas Becket. Reimagined as a spectacular piece of modern musical theatre and sub-titled “London’s Turbulent Son”, the show will feature characters and context from the original pageant, while offering a lively modern script and musical score. Writer and director Emmeline Winterbotham hopes that this bold, modern take on an old tradition will appeal to a contemporary London audience with little or no knowledge of Becket. To add to the immersive feel, audiences will be encouraged to come in Tudor costume and to explore the accompanying livery crafts fair which showcases the work of London guilds and draws a link with Becket’s origins as the son of a Cheapside merchant.

Most of our work on “The Redress of the Past” has been with pageants that happened a long time ago – Axbridge, Arbroath and the Becket Pageant are exceptions. But in many places where we have worked with local history and heritage sector organisations, we have found a deep interest in the pageants that were performed there. The most profound revelations come from talking to people who took part in pageants, and in understanding the impact they often had. Oral history interviews with performers make it clear that these one-off events are remembered, often vividly, many decades later. Some people trace a lifelong interest in history to acting in, or seeing, a historical pageant, and almost everyone who was involved had fun. History should be interesting and provocative, but it should also be enjoyed – and people certainly enjoyed historical pageants. We hope they continue to do so.