WhatsApp @ School – Where Does the Fun Stop? 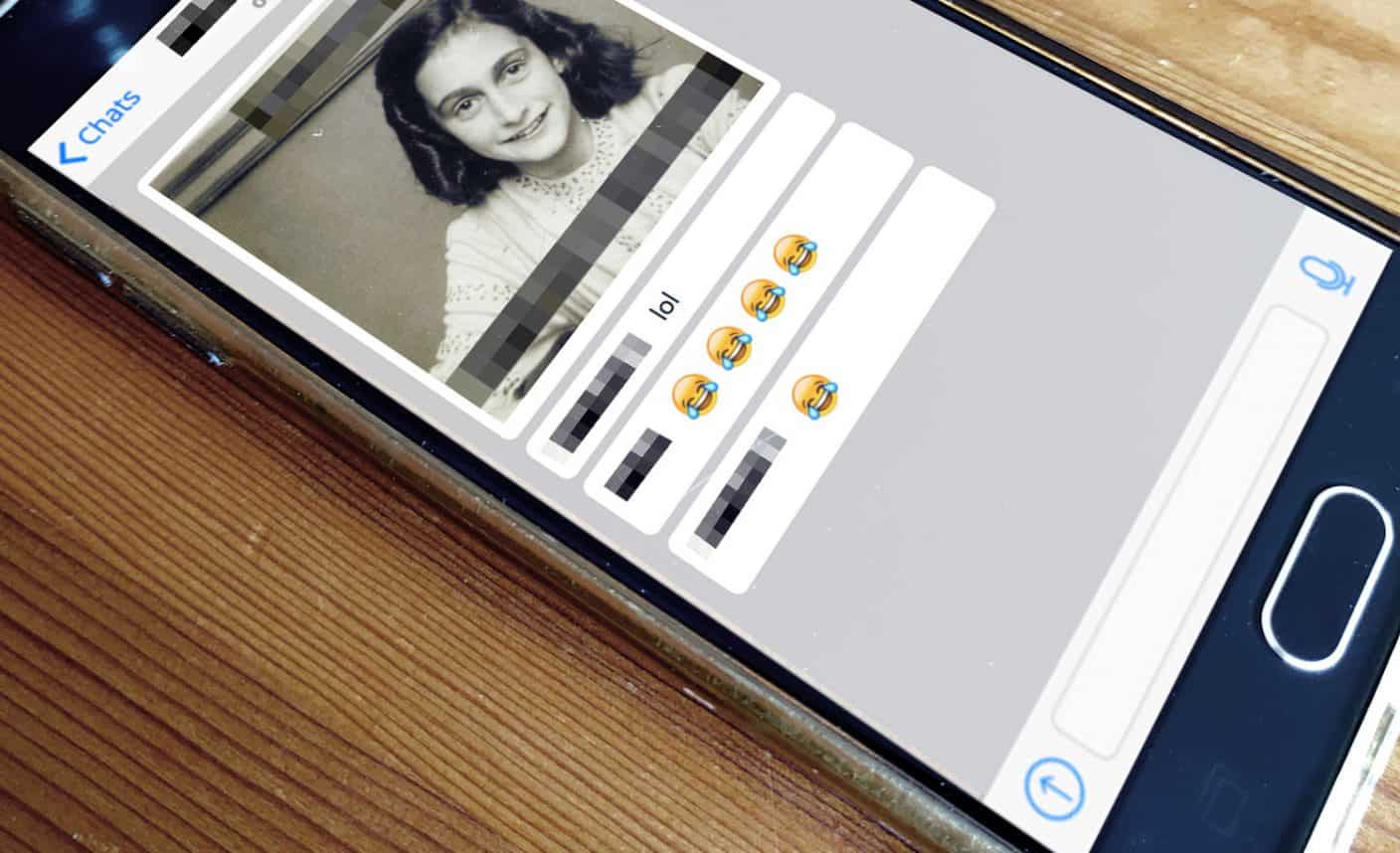 Abstract:
The importance of social media – especially of instant messaging applications – for the dissemination of right-wing extremist ideas is steadily increasing. Using the example of memes about Anne Frank, the author shows the consequences of this spread. Due to the lack of knowledge, this content can often not be decoded by students and therefore not be classified as extremist. The author thus calls for an even more vehement and sustained debate about right-wing extremism, the history of National Socialist Germany and an unyielding approach against right-wing extremist ideas on social media.
DOI: dx.doi.org/10.1515/phw-2020-15688.
Languages: English, German


The picture shows a girl at the age of 12 years. In Germany 12-year-olds today usually attend 6th grade of a school of general education. There is one thing each of us most likely has in common with a 6th-grader: We have already seen a photo of this girl. I suspect that you know exactly who it is and, unlike many students, you did not get to know this girl through pictures in a WhatsApp chat. Students in 6th grade, however, do often not know who this girl is. Thus, it is questionable how they react to the text added in the picture “Anne also gets a star today” – where does the fun stop?[1]

Instant messaging services are part of everyday school life, with as many as 95% of the students regularly using WhatsApp to communicate.[2] It is not without reason that WhatsApp is considered the most important software among the 12- to 19-year-olds.[3] In many schools, there are discussions as to whether students should be allowed to use the services for intra-class communication. It is obvious that for data protection reasons alone, teachers are not permitted to communicate with students via WhatsApp.[4] For example, some schools impose bans on classroom chats that use WhatsApp, based on the recommendations of the state authorities.[5] Beyond the data protection concerns, problems such as bullying or discrimination via instant messaging services are, however, not necessarily solved by bans, but rather shift them to fragmented small-group chats outside a classroom community which have their own dynamics. Problems in officially established class chats can at least be addressed by teachers in class. One thing is evident: WhatsApp should always be thought of as part of the school community and the public sphere of schools.

Anne Frank. But as a Meme

Let’s assume that a picture of Anne Frank appears in a WhatsApp chat of a 6th grade and becomes a digital cultural phenomenon meme by the inserted text “Anne also gets a star today.”[6] Possibly there are pupils who simply write “lol” or “ “. This hardly comes as a surprise when only just 47% of the older pupils between 14 and 16 years of age know that Auschwitz-Birkenau was a concentration or extermination camp.[7] In such a situation, it becomes difficult for another pupil to write into the group that it, in fact, is Anne Frank and that such a thing is not funny at all. As regards such cases, the smiley e.V. for the promotion of media competence summarizes that “[t]he lack of contradiction in the group [creates] a dynamic that leads to the fact that the students feel to have the right and are all the more encouraged to send even more radical stickers.”[8] The frightening prospect that inciting, primarily right-wing extremist or even Holocaust-denying memes are sent out has been documented many times.[9] Of course, adolescents who send out such memes mainly for amusement cannot directly be considered (right-wing) extremists. However, there is the well-founded danger that even “a joking discussion of such sensitive topics among children will result in an ideological bias.”[10] Such communication plays down Nazi crimes – not to mention any circulating Hitler memes or the use of unconstitutional symbols.

A Topic for Public History?

Should this be a topic für Public History? Absolutely! This example exactly demonstrates that the social acceptance of individual historical narratives is always in tension with the individual acceptance of collective historical memory.[11] Identity formation always also takes place outside of institutionalized confrontations with history. Without locating the described phenomenon WhatsApp more precisely in the field of public history, it becomes clear that all institutions have a responsibility to support students in their individual historical thinking at an early stage. Nevertheless, the smiley e.V., for example, does not necessarily see any responsibility lying with the institution of historical learning at school, since “discriminatory, inciting and antisemitic memes […] belong to the current living world of children and young people.”[12]

Not a Topic for History Lessons?

If the subject of history is concerned with understanding the present through the experience of time, and if it also pursues the relationship to the world around us as a fundamental teaching principle, then historical learning must address this topic. In the standard work “Teaching History” it has been noted for some time that history lessons at secondary level I still remain in the rigid corset of chronology.[13] Current curricula also corroborate this tendency.[14] Thus, as a rule, pupils in Germany do not come into contact with the period of National Socialism institutionally until the 9th or 10th grade. After all, 71% of the pupils aged 17 or more have knowledge of the crimes in Auschwitz.[15] But how are pupils in 6th grade supposed to recognize anti-constitutional media content if they simply lack the prior knowledge to identify it as such? It is only a logical consequence that right-wing extremist groups spread propaganda especially in schools and try to recruit new members.[16] Are thus not those students who have already gained a certain acceptance of National Socialist ideas particularly at risk? Does the fun not stop here?

– for the acceptance of the mindset that instant messaging services are part of students’ lives and that bans are not a solution.
– for public history and history didactics that more vehemently opposes the dissemination of National Socialist ideas and keeps a stern eye on all communication structures that downplay National Socialist ideology.
– for a fundamental rejection of chronologically structured historical learning in order to be able to make the period of National Socialism already a subject of discussion in 6th grade.
– for the development of concepts for teaching National Socialism and longitudinal sections on racism, Social Darwinism, chauvinism and fascism from 6th grade onwards.
– for more targeted cooperation between the subjects of politics and history for democracy education starting in 5th grade.

I plead for this because history teaching must address the problems of current and past societies in order to shape our future, and because history is a subject that makes you have fun. However, the fun stops when pupils lack the knowledge to recognize National Socialist ideology. The fun stops when pupils are in danger of being ideologically influenced by the consumption of National Socialist and right-wing extremist propaganda material, as well as by the often clueless trivialization of National Socialism by peer groups in social networks. The fun stops when National-Socialist-oriented extremists try to systematically recruit pupils at schools and via the internet. The fun stops when right-wing extremist groups no longer shy away from intimidating committed teachers with death threats and some other kind of violence. For me, the fun stopped when I myself had become a victim of such violence.

« Public Historians and their Professional Identity
Witness Auschwitz? How VR is changing Testimony »