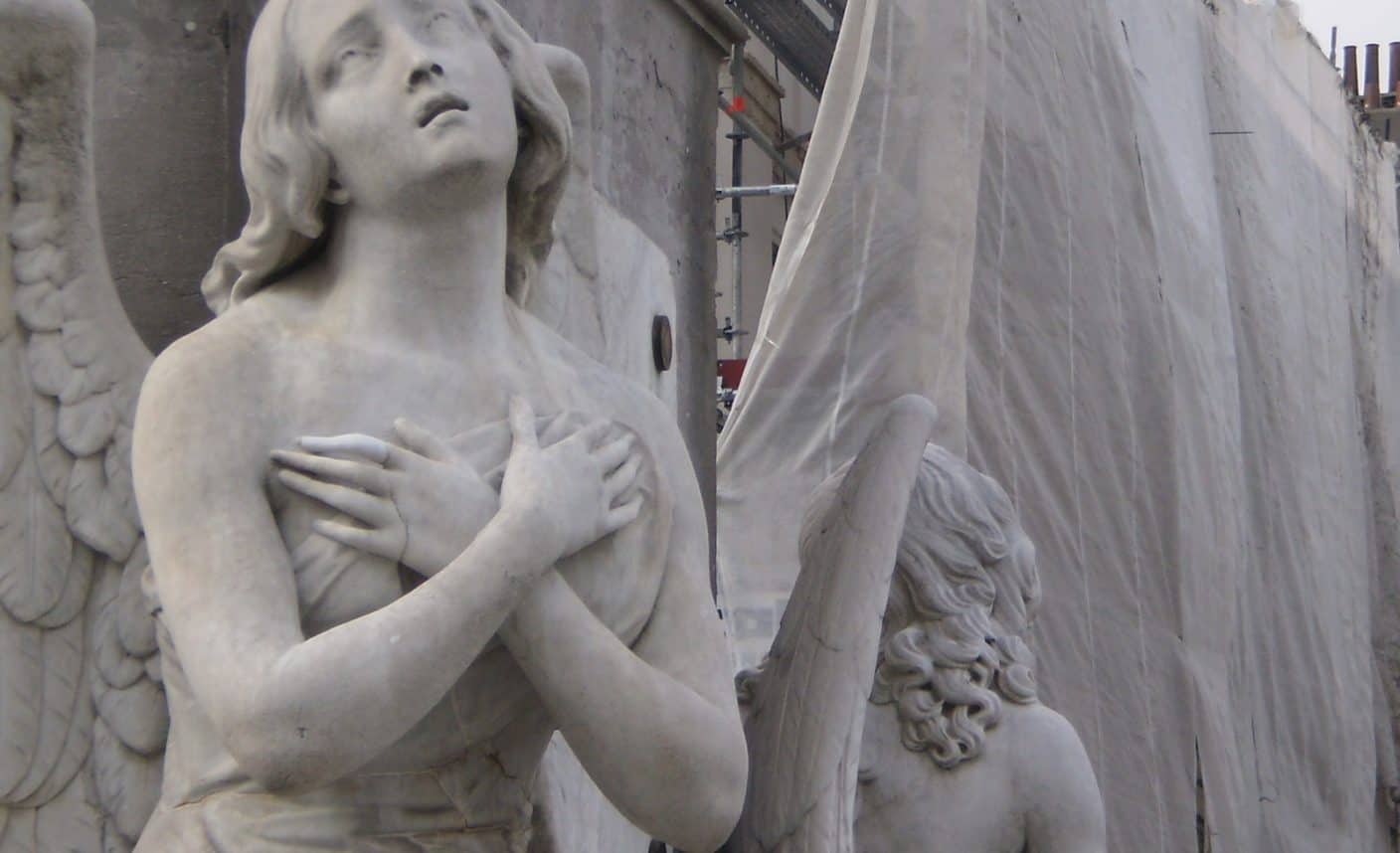 Abstract: The angelic sculpture on the cover of this editorial leads us directly into the framework of this issue of PHW. The sculpture is part of a monument that stands on the “Place of the Martyrs” in Brussels, the Pro Patria Monument of 1838.[1] It commemorates the fallen rebels of the insurrection against the troops of the King of the United Netherlands that took place in Brussels in September 1830. These rebels were buried there. The reasons for the uprising of the Brussels proletariat and part of its citizens against the King in The Hague were manifold[2]: language differences and policies, denominational differences, differences in political traditions and different speeds of industrial development — and all this in a new country that had only just been constituted on the drawing board of the Congress of Vienna. However, the internal differences in what had been revolutionarily constituted as “Belgian” were hardly smaller than in the larger Kingdom of the United Netherlands.
DOI: dx.doi.org/10.1515/phw-2020-14982.
Languages: English, Deutsch


The angelic sculpture on the cover of this editorial leads us directly into the framework of this issue of PHW. The sculpture is part of a monument that stands on the “Place of the Martyrs” in Brussels, the Pro Patria Monument of 1838.[1] It commemorates the fallen rebels of the insurrection against the troops of the King of the United Netherlands that took place in Brussels in September 1830. These rebels were buried there. The reasons for the uprising of the Brussels proletariat and part of its citizens against the King in The Hague were manifold[2]: language differences and policies, denominational differences, differences in political traditions and different speeds of industrial development — and all this in a new country that had only just been constituted on the drawing board of the Congress of Vienna. However, the internal differences in what had been revolutionarily constituted as “Belgian” were hardly smaller than in the larger Kingdom of the United Netherlands.

It was therefore a cumulative conflict of interests that led to this revolution, which wanted to be understood as national (and was not answered by the great powers of the time with military intervention only for contingent reasons). This newly reconstituted, often heterogeneous small country without a tradition of national or cultural autonomy now needed one thing above all: the creation of a collective identity. And the process of inventing a nation, first known from Europe and later from all over the world, now took place in Belgium as in a public history laboratory. The “Monument to the Fatherland” on the newly named Square of the Martyrs (note the Christian echatological interpretation of death) is an example of a cultural and state-supported response to a complex of needs. This includes the need to create group cohesion in order to pursue the goals and interests of the group, the national collective, the need to stabilize solidarity and protective institutions, and, among others, the need to narrate belonging, the collective identity.

It is impossible to determine how the inhabitants of Brussels or the “Belgian” visitors might have felt — let’s say in 1840 — when they saw the newly designed monument, which is linked to Christian redemption mythology. Perhaps there is socially, culturally and linguistically differentiated research on contemporary reception of this monument. But we might begin with the following idea: The national narrative of redemption, set in stone in Brussels, appealed to every individual (at that time not yet shaped by similarly tuned cultural institutions). And those addressed were inwardly free to either recognize (fully or with reservations) or reject this manifested response to a prevalent collective political-cultural need.

These options may manifest themselves publicly as applause or opposition, or be silently carried away. In any case, the relationship between the individual and the group, between institutions and actors, between narrations and narratives is always precarious, permeated by power and interests while constituting a space for the laborious practice of freedom. This dialectial process is a discourse of identity related to the past, realized in dialectical shifts. As such, it has been a characteristic of culture ever since its existence between people in and among groups. We might call such processes “public history.”

One can illustrate this by means of this scheme. A detailed derivation and explanation was published in late 2018.[3] 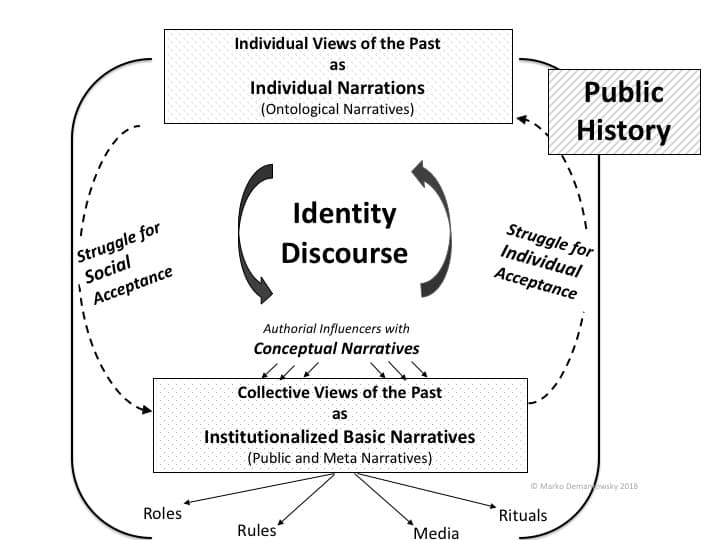 This month’s three contributions are meant to demonstrate these public-history relations both in different countries and in different yet comparable constellations. They focus on a partial aspect of the past-related identity discourse: conceptual narratives (Margret R. Somers) and their politics. This well-established line of research is pursued in this month’s issue through current political application.

It is precisely such empirical specifications which, reflected on a level of theoretical abstraction, enable structural and constellation-transcending insights. I am pleased to have secured contributions from three excellent colleagues for this month’s topic. And I am looking forward to the discussion on the individual contributions.

Our new author Christoph Dartmann is a medievalist, which I am particularly pleased about, because public history is not a delimitable academic discipline, and certainly not a subdiscipline of contemporary history, but rather a functional field of practice related to the past with certain role requirements that distinguish it from the academic field.[4] When it comes to the political instrumentalization of the past in the form of narratives, scholars are even called upon to become actively involved in the non-academic debates of public history, as their ethos as citizens demands. In this respect, there is a special need for colleagues in Ancient History, Medieval Studies and Early Modern History to become professionally involved as public historians and to reflect on their practice. Prof. Dartmann is without doubt one of those historians of the so-called pre-modern period who do this frequently and thoughtfully and, if you wish, with a cosmopolitan intention. In this respect, it was high time to make his voice heard at PHW.

Dartmann’s contribution addresses the prevailing understanding of the Mediterranean as a border region. This understanding is extraordinarily present in the current political debate and deeply rooted in our cultural memory, as Prof. Dartmann’s numerous examples illustrate. While heeding cartographic perspectives, the contribution contrasts everyday understanding with recent historical research, informed both by global history and by entangled historical perspectives. Such research is well suited to placing into perspective the narrowed nostrocentric and identity-driven view of a supposedly superior occidental Christian Europe, to making cultural construction transparent and to telling the Mediterranean past in its present complexity. In this sense, Dartmann also takes a critical look at current history teaching. Borders are invented, collective identities are made and then realized with often cruel consistency as state or EU policies. Here, history has a social responsibility:

For current xenophobic political campaigns, but also for a maritime border regime that claims thousands of victims every year, older historical narratives prove to be disastrous associative spaces that can build bridges between a conservative establishment and radical right-wing forces. (Dartmann 2020, PHW)

In the second week of our Basel Focus Month, PHW will feature another new voice: Gisele lecker de Almeida. From the very beginning, we have sought to cultivate authorial diversity and have encouraged women, in particular from beyond Europe, to submit contributions. Dr. de Almeida, from Brazil, has worked at universities in the UK and earned a PhD in Public History in Belgium. While connected to her homeland through knowledge, memory and compassion, she looks across the Atlantic as a cosmopolitan, as a self-declared European. This perhaps also explains the noticeable alienation in her essay on the historical-political situation in Brazil since new president Jair Messiah Bolsonaro took office on 1 January 2019.

Dr. de Almeida also addresses the fact that Bolsonaro’s position on historical politics, especially with regard to the Brazilian military dictatorship, cannot have remained unknown to anyone in the election. On the contrary, the contemporary historical narrative of the Brazilian right, that everything was actually not so bad but actually quite good, was rather a consciously deployed slogan in this election campaign and also in previous ones. It raises a question that public historians must discuss: Why did Bolsonaro’s template managed to secure a majority in 2018/19 and why this template is still unable to do any harm to his campaign in public even now, alongside homophobic and racist topoi. Obviously, politicians like Bolsonaro succeed in addressing what relevant groups of voters find attractive in today’s Western world: narrative patterns of a healed cultural and national unity, of an annulled historical collective sense of guilt, of a cultural reassurance, which evidently yields political profit not only in contemporary Brazil. This unified foundation needs the other, the false frontier. In this respect, Dr. de Almeida’s contribution offers us further critical insight into the identity temptation of our time.

A third such insight is provided by Arthur Chapman, who is already very well known to PHW readers from a political culture — Britain’s — that has left outsiders mostly stunned, rarely sarcastically amused and fascinated by its epic — Brexit — struggle since the end of 2015. The latter was particularly true of British parliamentary culture. Chapman looks out from Westminster Palace, so well suited to TV, into a society and its public sphere shaped by the financial crash of 2008. He does once again from a theoretically broadly informed perspective.

Chapman’s contribution first recalls important contributions to the long-standing scholarly debate on the construction of collective identities, which he subsequently refers to the current political culture of Great Britain, or more precisely of England, which is characterized by the “prevalence of binary identity discourses.” Following Bolton and Pitts (2018)[5], he distinguishes two variants of “austerity populism” that became authoritative in the wake of the 2008 crash. “Corbynism” is one variant, and so-called “neoliberalism” the other. Chapman also sees this scheme realized in the variants of “Brexit populism.” These two discourses have quite obviously overlapped unpleasantly. Chapman illustrates this by exploring the language of the 2019 Tory and Labour manifestoes. As a plausible conclusion to his essay, he explains the secret of Boris Johnson’s success — but you should read this for yourself.