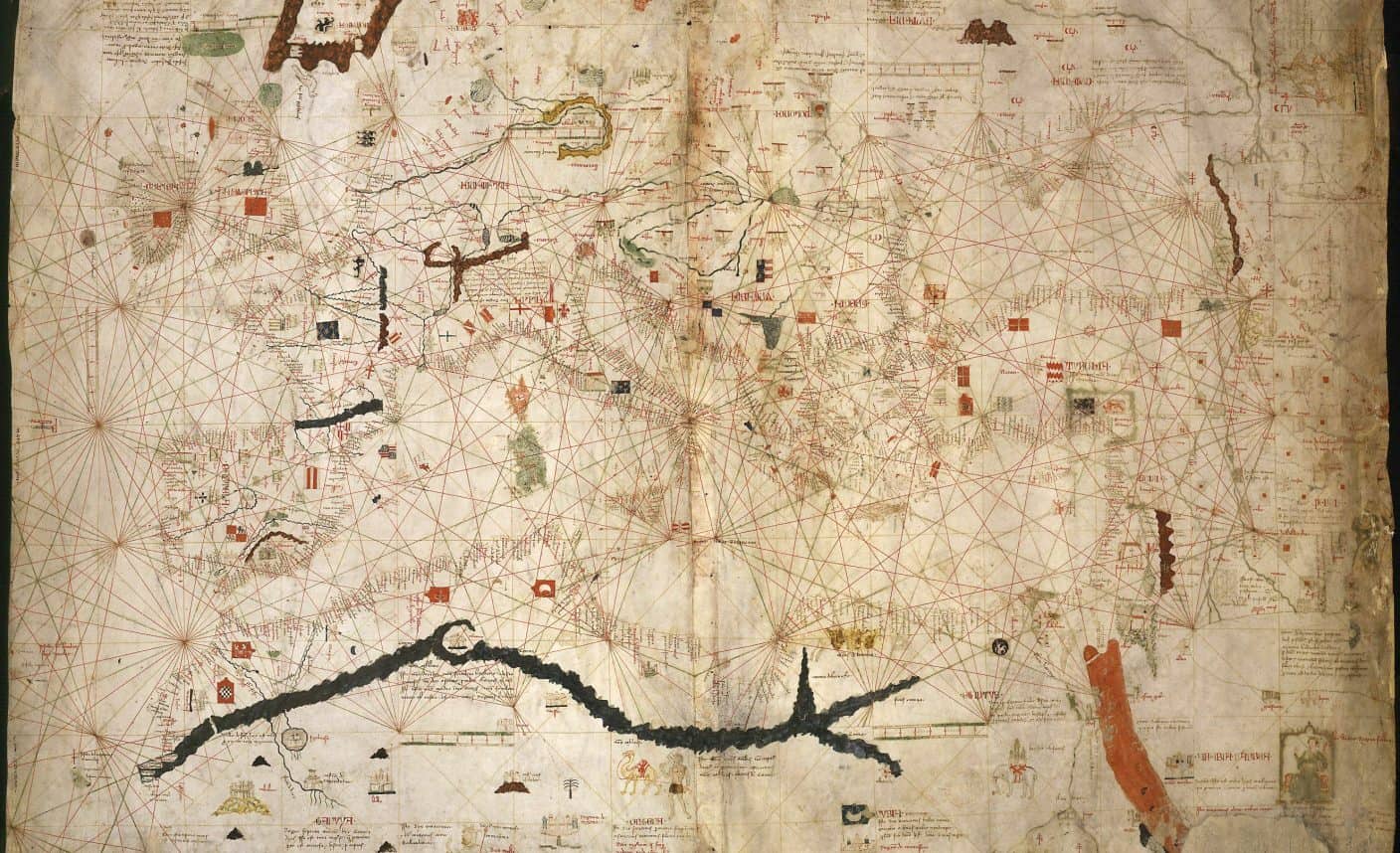 Abstract: Thousands of lives are sacrificed to the EU’s border regime in the Mediterranean every year. As a means of justification serves the reference to the medieval Mediterraneum constructed as the border between a ‘Christian Occident’ and an ‘Islamic Orient’. Historical research knows that this image is wrong, but cannot implement its knowledge in public discourse..
DOI: dx.doi.org/10.1515/phw-2020-14965
Languages: English, German


Every year, the EU’s border regime in the Mediterranean costs thousands of lives. This massive death toll is justified by referring to the medieval Mediterraneum, construed as a border between a “Christian Occident” and an “Islamic Orient.” Historical research knows that this conception is wrong, but has thus far been unable to implement its knowledge in public discourse.

Geographically, the Mediterranean is an inland sea that connects the coasts of the Middle East, North Africa and Southern Europe. Europe is separated from Asia and Africa only by the narrow straits of the Bosporus and the Strait of Gibraltar, two continents being connected by the Sinai land bridge. The peninsulas of the Peloponnese and Italy as well as the various islands and archipelagos additionally facilitate crossing the Mediterranean. Current policy, however, is dominated by defining the Mediterranean as the southern border of Europe, where the European Border and Coast Guard Agency FRONTEX is deployed. Its activities not only aim to resolve practical issues (customs and border control), but also have strong ideological implications. At least those who postulate a European, Christian identity, supposedly endangered by migration from Asia and Africa, regard the inland sea as the border between different, seemingly irreconcilable cultural areas. In the legacy of biological racism, large population groups are once again being attributed adverse characteristics, cultural instead of racial ones, which make these groups as dangerous and despised as the alleged biological alterity of previous generations.

The construal of the Mediterranean as the southern border of Europe is a political symbol that rests on firmly established historical narratives. This can be demonstrated by the representation of Europe and the Mediterraneum in historical atlases. Maps of antiquity, when the Greeks sat “like ants or frogs around a swamp”[1] or the Roman Empire ruled the coasts, place the Mediterranean at their centre. The common representations of the Middle Ages shift this focus far to the north, to the territory of present-day Germany. Thus, the Mediterraneum becomes the periphery, the southern border of the continent of Europe, which is visualized as the actual site of history. This historical-geographical construction has in turn been used as a symbol to postulate a European-Christian identity in dissociation from a supposedly hostile Islam. See, for example, the sticker spread by the Identitarian Movement in 2017 that features Europe as a solitary peninsula projecting into the vast ocean. While the European silhouette exhibits the familiar cartographic image, the coast of North Africa has been airbrushed and Greece has been cut off, to suggest that Europe is geographically isolated.[2]

The Ocean as a Struggle Zone

These pictorial representations correspond to the canon of historical content characterizing history teaching at schools. Antiquity is mainly dominated by Greco-Roman history, but also by Jewish history, and thus is focused on the Mediterranean. For the Middle Ages, however, the focus lies on Christian Europe. The recent additions of the Crusades and the so-called “Reconquista” only partially compensate for this shift in historical focus, as they present the Mediterranean region primarily as a battle zone between Christians and Muslims. Thus, these themes also fit into the picture of a maritime area that is said to have been marked above all by confrontations between religiously and culturally different, mutually hostile groups. This further consolidates the image of the Mediterranean as the southern border of medieval Europe.

Historical scholarship has increasingly broken up this focus of the European Middle Ages in the last two decades. Inspired by the new interest in global history, research has focused on processes of contact and transfer between Asia, Africa and Europe, but also on the “entangled histories” of these regions, to show the manifold interactions across the Mediterranean. This can also be illustrated with cartographic material: since the 13th century, so-called portolan charts were produced in Italian port cities as well as in the Aragonese dominion, which traced the coasts of the Mediterranean and adjacent maritime areas out of interest in seafaring.[3] Their name comes from the fact that they were created from port lists. On the maps, which are hardly interested in inland conditions, the names of the ports are written at right angles to the coastlines and, together with other indications of rocks or shoals, served coastal navigation. In accordance with the trade routes regularly followed by Italian or Aragonese ships, these late medieval portolan maps show the coastlines of the Mediterranean and Black Seas and the west coasts of Africa and Europe from the Canary Islands to the south-western tip of the North Sea. The medieval depiction of these coasts appears strikingly modern because they are very similar to modern geographical representations. The northern waters — for example off Scotland, the Frisian North Sea coast or Scandinavia — are only sketched schematically on these portolan maps. Only a few place names were known from Norway or Denmark. For the maritime practitioners from the Mediterraneum, the coasts of the Caucasus or Northern Africa were much more familiar than the North Sea coast of present-day Germany.

It can be shown in many ways how closely people from Southern Europe, West Asia and North Africa were in contact and exchange with each other. This applies, for example, to seafarers and long-distance traders who transported goods from Central and South Asia to Europe. Ports such as Trabzon (Trapezunt) or Ayas (Lajazzo) served as transhipment points for goods travelling on the Silk Road from Central Asia to the West. In addition, the so-called “maritime Silk Road” connected the Indian Ocean via the Red Sea with Egypt. Here, Alexandria in the Nile delta served as a central transhipment point, where goods from the Indian subcontinent or from Southeast Asia were reloaded onto European ships, as well as products from the Nile valley or other regions of East Africa. The diversity and origin of Mediterranean merchandise are impressively documented, for example, in the Merchant’s Handbook by the Florentine Francesco Balducci Pegolotti.

Politically and culturally, Mediterranean actors were also in close contact with each other. Beyond the Crusades, alliances and enmities were generally based not on religious or cultural differences, but on concrete interests. Thus, Genoese and Venetians were usually hostile to each other and, given the opportunity, found coalition partners in the Byzantine or Ottoman Empire or even the Mamlukes. Economic and political cooperation could hardly be disrupted, not even by papal boycott demands, which were launched after the conquest of Acre in 1291 in order to prepare a renewed Christian conquest of Palestine. At the same time, Mediterranean realms tended to be extremely heterogeneous in terms of language and culture. Multireligiousness was the rule rather than the exception in Mediterranean medieval societies. Not even in the Crusader states was there any attempt at religious or cultural homogenization; rather, a wide range of religious beliefs existed in form of various varieties of Jewish, Christian and Islamic traditions. From a Central European perspective, the Roman-German emperor and Sicilian king Frederick II from the House of Staufer appears exotic — not least because of his cooperation with Muslim rulers and soldiers or because of his intellectual interests. Historiographical accounts of German emperors have long sought to portray and explain Frederick’s apparent exoticism. To Mediterranean actors, however, he represents the normal case of a ruler who cooperated with the elites of his empire regardless of religious denomination and who used the promotion of scholars for self-representation.

Historical studies are well aware of the close connections among those populating the Mediterranean shores. However, this knowledge has not yet broadly entered European historical consciousness. The political claim to supposedly specifically Christian traditions and Western values, on the other hand, is based on older narratives that construed medieval Christianity in Europe in contrast to the oriental world of Islam. For current xenophobic political campaigns, but also for a maritime border regime claiming thousands of victims every year, older historical narratives prove to be disastrous associative spaces capable of bridging a conservative establishment and radical right-wing forces. Historical scholarship is therefore challenged to make its knowledge available in such a way that Eurocentric narratives are replaced by more appropriate historical images better reflecting the current state of research while doing justice to Europe’s role in a globally connected world. The much-vaunted “third mission” of science thus becomes politically relevant.