What Influences Public History the Most

Was Public History am meisten beeinflusst 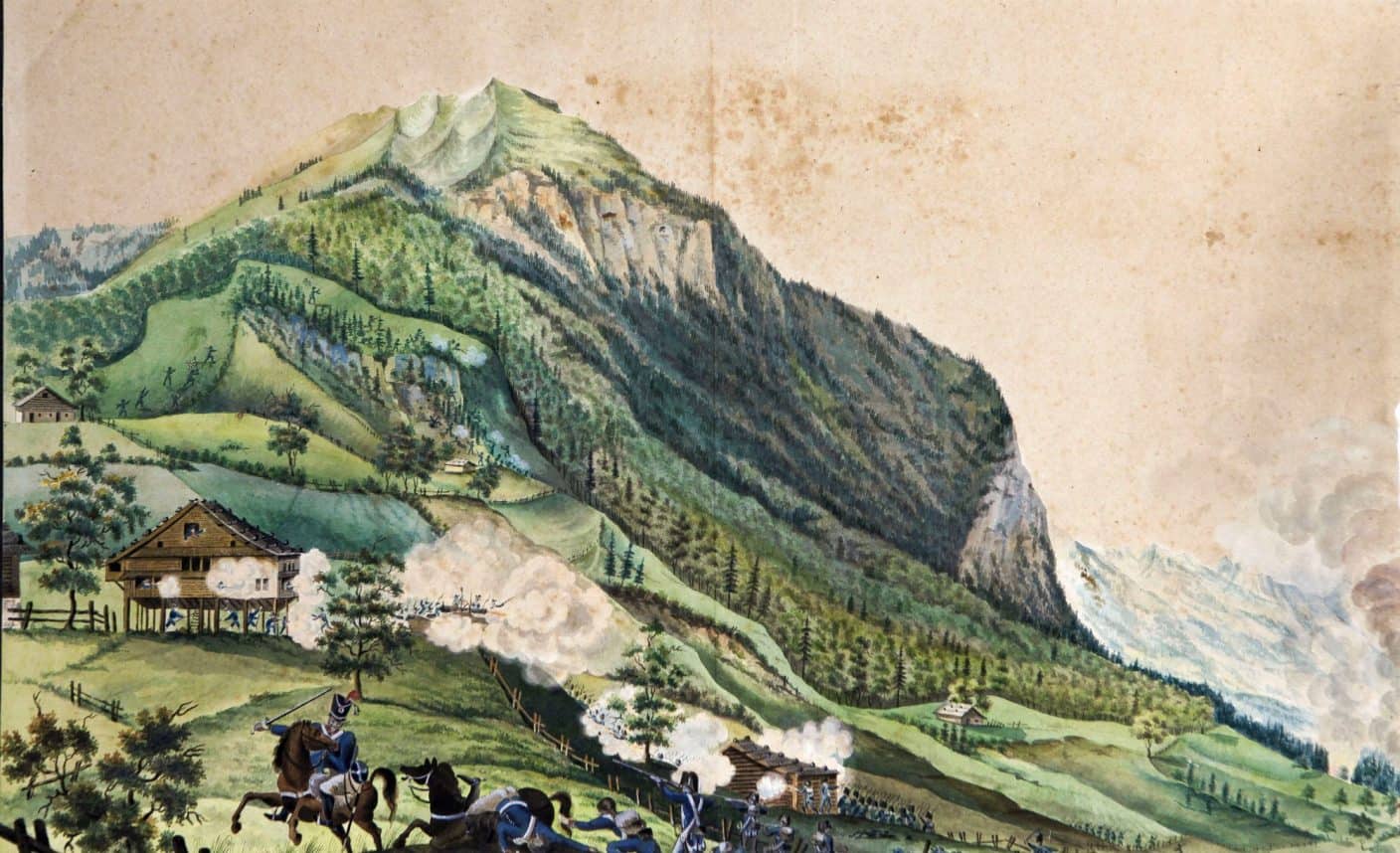 The “French Invasion” in Nidwalden of 1798

In Switzerland as well the French Revolution had a significant impact. The ideas of the Enlightenment were enthusiastically received in many places. Revolutionary uprisings in different places against the old order of the Swiss Confederation gave the French troops in 1798 a reason to occupy the territory and to proclaim the “Helvetic Republic”. But the new order was not accepted everywhere at all. When the men who had the voting rights in Nidwalden were supposed to swear the oath of allegiance to the new Helvetic Constitution, a popular uprising broke out, which led to military clashes. On 9 September 1798 just under 1,600 natives of Nidwalden threw themselves into a hopeless battle against a 10,000 men strong French army under General von Schauenburg.[1] When the French managed to break through at the Allweg, the fight was decided.[2]

The great resistance of the inhabitants of Nidwalden now, amongst other things, caused the victorious French to rage in the region, to pillage it, to violate women and to massacre people after the fight. The priests who had organized the resistance were murdered along with many civilians, all in all roughly 5 percent of the population of Nidwalden.[3] The great hardship led to the fact that the Enlightenment pedagogue Johann Heinrich Pestalozzi received the order to set up an orphanage and poorhouse in Stans.[4] Here he made fundamental pedagogical experiences which he then used to found his famous education institute the following year at Burgdorf Castle where he developed and theoretically substantiated a teaching and education method of his own.[5]

All these events surrounding the “French invasion” of 1798 can be imparted completely differently in history lessons. Some of the teachers intend to impart knowledge: They narrate and explain how things were in Nidwalden at the time, what happened and in what order, what had been the causes and consequences. Other teachers want to encourage students to think in historical-scientific terms and make them compare multi-perspective sources and controversial representations as well as to critically discuss questions: Why did the people of Nidwalden not restrain from becoming involved in such hopeless fighting? Were they misled and manipulated? In such a teaching the focus lies on the competent dealing with materials from and about the past. It is all about the students’ ability and critical thinking. And still other teachers wish to build up attitudes: They stage dilemma situations, provide case studies, make comparison with today and accompany students on their way to the insight that also these days it is important to stand up for the victims of war.

What teachers wish to achieve in their history lessons and how they stage their teaching is marked by their history-related beliefs.[6] More recent research on teachers’ subject-specific beliefs in German-speaking Europa identify three manifestations:[7] Martin Nitsche distinguishes positivism, skepticism and narrative constructivism;[8] Nicole Riedweg, Peter Gautschi and Loredana Torchetti differentiate between “history as a master teacher for the present”, “history as a science” and “history as a narrative about the past”.[9]

In the communication of history in public other beliefs can be recognized. This is because the communication of history in public is more strongly driven by trends than the communication of history in schools. Thus, “identity” plays a major role in particular. Whoever wants to convey the message “Be like us!” emphasizes either the heroic defensive battle of the people of Nidwalden or the standing up for Enlightenment ideas.[10] Whoever wishes to entertain through history picks out emotionally touching episodes from these events, and stages them, for example, in a radio play or with augmented reality. History can also help to keep alive the memory of relatives or compatriots killed in action and to grieve for them. And, of course, history, every now and then, serves as a place of longing, as a possibility to get out of the, sometimes boring, everyday life and to escape into an era in which exciting radical changes and interesting upheavals happened.

If now a history trail shall be set up at the site of where the armed clashes took place during the “French invasion” – in Stansstad in the Swiss canton of Nidwalden – the people involved have to discuss their perceptions and history-related beliefs with each other, to negotiate and align them. The contracting authorities have, of course, a great influence on all the communication of history in public. When it comes to history trails this is mostly the executive authority of the municipality on whose territory such a history trail is established. If the arising expenses exceed the amount which the executive authority is entitled to allow, the legislative authority must decide. In Switzerland at municipal level these are oftentimes all the voters either at the ballot box or otherwise at the municipal assembly at a designated place of assembly. This, again and again, triggers exciting discussions, first of all, about the motives why such a history trail should be made, secondly, about the target groups and, thirdly, about the goals which should be accomplished with the history trail. And, at this point, beliefs as to what the purpose of history is and what it can achieve play the greatest role. Ideally, a commonly shared belief about the goals and the staging is built by this exchange in the community. If a consensus can be found, the concrete realization at the very site mostly causes no problem, and the history trail is accepted by the local population and also used by visitors – as an experience and for history education.[11]

_____________________
[1] For a history of events, see Martin Illi, “Franzoseneinfall,” Historisches Lexikon der Schweiz (HLS), December 17, 2009, http://www.hls-dhs-dss.ch/textes/d/D8915.php (last accessed 17 April 2019).
[2] Katharina Odermatt, “Der lange Weg zum modernen Staatswesen,” Geschichte des Kantons Nidwalden: Band 1, ed. Peter Steiner, Hansjakob Achermann, Karin Schleifer-Stöckli and Emil Weber (Stans: Verlag Historischer Verein Nidwalden, 2014), 127-140.
[3] Christoph Baumgartner, “Der ‘Franzosenüberfall’ von 1798,” State Chancellery of the Canton of Nidwalden, October 2016, https://www.nw.ch/_docn/86826/Geschichte_Franzosenueberfall_2016_10.pdf (last accessed 17 April 2019).
[4] See e.g. Wolfgang Klafki, “Pestalozzis ‘Stanser Brief’. Eine Interpretation,” in Pestalozzi über seine Anstalt in Stans. Mit einer Interpretation und neuer Einleitung von Wolfgang Klafki, ed. Wolfgang Klafki (Weinheim: Beltz, 1997), 39-71.
[5] See also Peter Stadler, Pestalozzi: Geschichtliche Biographie (Two volumes; Zurich: Verlag NZZ, 1988 and 1993) or Bijan Amini, Johann Heinrich Pestalozzi: Einführung in Leben und Werk (Pinneberg: Heseberg Verlag, 2018).
[6] Carla L. Peck and Lindsay Herriot, “Teachers’ beliefs about social studies,” in International Handbook of Research on Teachers’ Beliefs, eds. Helenrose Fives and Michele Gregoire Gill (New York: Routledge, 2014), 387-402. It becomes apparent in this handbook also that it is no simple undertaking to define what “history-related beliefs” exactly are. It seems solely clear that they are relatively stable, judgmental and powerful opinions as to what history is and what purpose it serves.
[7] The studies with their three manifestations each remind of the differentiation made by Bernd Schönemann: “History as a benefit”, “history as education” and “history as an experience.” For further information, see Bernd Schönemann, “Geschichtsdidaktik und Geschichtskultur,” in Geschichtskultur: Theorie – Empirie – Pragmatik, eds. Bernd Mütter, Bernd Schönemann and Uwe Uffelmann (Weinheim: Beltz, 2000), 26-58, here 47-55.
[8] Martin Nitsche, Beliefs von Geschichtslehrpersonen: Eine Triangulationsstudie (Bern: Hep Verlag, to be published in 2019). Nitsche refers to positivism, skepticism and narrative constructivism as “historical-theoretical beliefs”. But other than that, he from the former distinguishes three “historical-didactic beliefs”: Transmission, individual constructivism, social constructivism. In Nitsche‘s study it seems particularly interesting to me that no systematic cross-cutting constructional connections between the historical-theoretical and historical-didactic beliefs could be found.
[9] Nicole Riedweg, Peter Gautschi and Loredana Torchetti, “Fachspezifische Überzeugungen von Geschichtslehrpersonen,” in The Teaching of the History of One’s Own Country, eds. Nadine Fink, Markus Furrer and Peter Gautschi (Frankfurt: Wochenschau Verlag, to be published in 2020). With the questionnaire data collected in this study a model with two manifestations could also be formed: History as an orientation for the present and the future / history as a construct of the past.
[10] Identity building also exists in a less pronounced way, rather in the sense of tradition building. See also Astrid Schwabe and Martin Fröhlich, “Erinnerungen an 1918 in Kiel: Schlaglichter auf die regionale Geschichtskultur im Gedenkjahr 2018,” Demokratische Geschichte: Jahrbuch für Schleswig-Holstein 29 (2018): 171-197.
[11] In contrast to the communication of history in schools where the concept of “education” has over the last few years been replaced by the concept of “competences”, “history education” (“Historische Bildung”) has remained the determining orientation in the German-speaking public history. People are thus historically educated if they have differentiated personal and social identities, who openly and curiously encounter the vast field of history, who have well-developed competences when dealing with the past, history and memory and who, based on that, recognize and use their own scopes for action in the present and future as well as they are aware of the opportunities of history education and want to continue to educate themselves.