Going beyond “Narratives” vs. “Competencies”: A model of history education 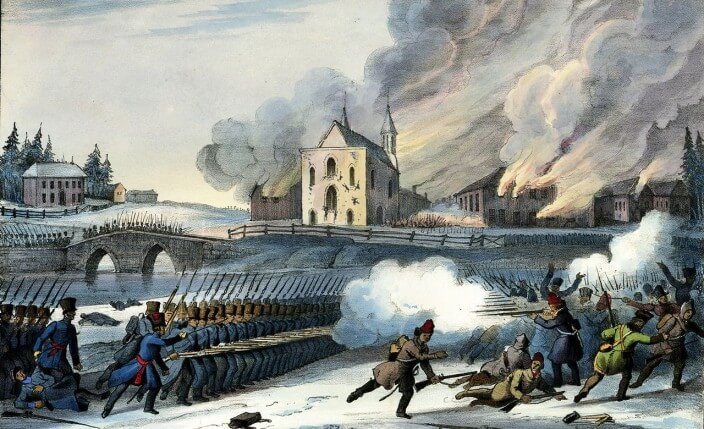 Abstract: Poor Québec history program! It is going through another round of ministerial revisions. This time, the competency-based approach of the current course of study was deemed “too radical.” In a recent report to the Minister of Education entitled “The meaning of history,” Jacques Beauchemin and Nadia Fahmy-Eid recommended to “reconcile the history program with its national framework” by reinstating the “narrative structure” into the organization of the program.
DOI: dx.doi.org/10.1515/phw-2016-5918.
Languages: English, Deutsch, Français

Poor Québec history program! It is going through another round of ministerial revisions. This time, the competency-based approach of the current course of study was deemed “too radical.” In a recent report to the Minister of Education entitled “The meaning of history,” Jacques Beauchemin and Nadia Fahmy-Eid recommended to “reconcile the history program with its national framework” by reinstating the “narrative structure” into the organization of the program.

A national framework for history in school

The actual course of study, the authors claimed, lacks coherence and chronology and hinders the development of a “sense of shared memory.”[1] The response of the educational community came fast and furious. On the one hand, proponents of the actual program reaffirmed that historical thinking competencies should take precedence over the historical narrative. History, as one professor claimed, should be taught as a “science” with its principles and method of discovery.[2] School history should contribute to the development of critical citizens capable of questioning the world in which they live. Others, however, voiced their concerns. Students, they argued, need practical engagement and a sense of orientation; and a national framework for history in school is the most suitable structure for teaching the national narrative. As one teacher put it bluntly, we need “to tell the story.”[3]

Seixas’ updated matrix offers an important contribution to history education. But it is insufficient in order to make sense of the current debate over history in Québec. On the one hand, it is misleading to claim that scholarly knowledge operates in a singular mode that directly and systematically informs the needs of practical life. In many ways, historians generate competing narratives – and historiographies – within a community of inquiry and, as a result, produce a vast “theoretical surplus” beyond the needs for life orientation and identity. On the other hand, Seixas’ “red zone” deals only with general contexts within which history lives its practical life. It lacks the practices and methods used to generate cultural and public narratives.

Interpreting and narrating the past – a revised proposal

As a result, I propose a revised matrix, which, I hope, encapsulates the essence of historical thinking and narratives in a larger cultural context that includes education.
First, it allows us to see how the communities are related in society and how they potentially inform one another without being conflated. Disciplinary history, cultural and practical life, and history education subscribe to distinctive approaches and practices to generate interpretations.
Second, it places history education at the intersect of disciplinary history and cultural life practice, not so much because it naturally fits there but because it is located in a strategic position where students can learn the competencies of historical consciousness: the competency to critically search, read, and analyze historical sources, including historiographies, and the competency to construct historical narratives for different purposes.
Third, it places these community practices within historical culture, that is, within the totality of discourses in which a given society understands itself and its future by interpreting and narrating the past.

This matrix provides us with a distinctive model for analyzing the Québec debate over national history. It makes it possible to understand the goal of school history beyond the simple dichotomy of “telling the national narrative” vs. “teaching historical thinking”. It offers the possibility for students to learn history beyond the practical needs of Québec’s cultural life by making use of additional methods and tools of historical inquiry. Perhaps, more importantly, it makes it possible for stakeholders to position themselves with regard to the purpose(s) of history education in society. Should it be located in the red zone of cultural life? Should it be limited to a disciplinary practice of historical thinking? Or should it be located somewhere between these sets of practices?

History educators are among a diverse group of participants in the formation of students’ historical consciousness, yet too often they act as if they were the only ones.[5] We need to (re)conceptualize the development of students’ historical consciousness, not exclusively as a practice of public memory or a set of scholastic competencies, but as the effective result of the interplay between historical culture, public memory, practical life, schooling, and the practice of disciplinary history. 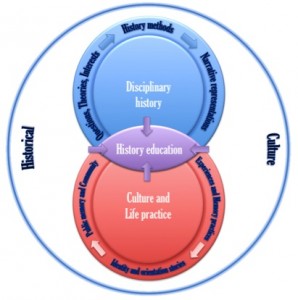 Blue zone: Historians generate research questions from personal and cultural life interests and theories, use varied historical thinking methods to generate evidence-based narrative interpretations that inform the community of practice and, to a certain extent, about cultural and practical life. Historians generate a theoretical surplus of knowledge beyond the needs of practical life.
Red zone: People rely on life experiences and varied cultural practices (storytelling, diaries, museum visits, etc.) to produce stories for life purposes, orientation and identity formation, which, in turn, inform public memories and community building.
Purple zone: History education is the context within which learners acquire, develop, and internalize the mental and cognitive procedures of historical consciousness. This context goes beyond schooling to include the multiple forces with which a culture transmits and understands itself over time.
White zone: The totality of discourses in which a society understands itself and its future by interpreting and narrating the past. This culture must be analyzed in a broad, transdisciplinary fashion in order to understand the nature and field of human life of a given society. 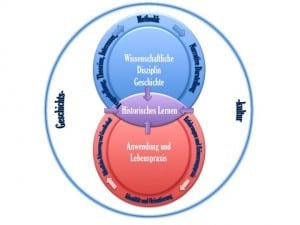 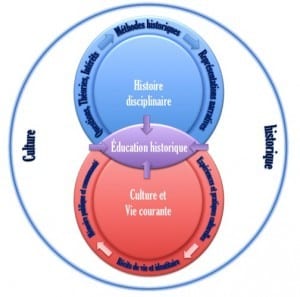 « On the Grammars of School History: Who Whom?
Memory Studies “Boom” in Russia »