A Collaboration Machine. The Index Didacticorum 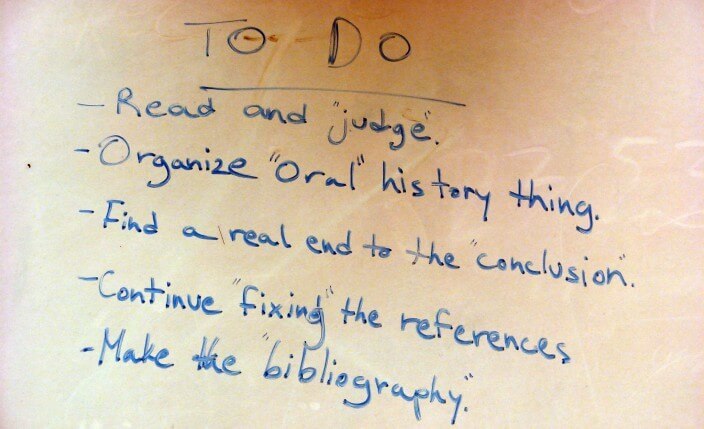 Abstract: Our daily life as researchers is defined by research publications, literature reviews, reports about experiences and discussions, and proposals. That’s self-evident. Right? What is their role for us, in fact? How much do we still read, in order to write? Only very few of us manage to keep a complete survey of current publications, at the very least. Does the bibliographic informed and systematic reading, inevitably, overtax the academic individual today? So, we came up with an Index Didacticorum.
DOI: dx.doi.org/10.1515/phw-2015-4778.
Languages: English, Deutsch


Our daily life as researchers is defined by research publications, literature reviews, reports about experiences and discussions, and proposals. That’s self-evident. Right? What is their role for us, in fact? How much do we still read, in order to write? Only very few of us manage to keep a complete survey of current publications, at the very least. Does the bibliographic informed and systematic reading, inevitably, overtax the academic individual today? So, we came up with an Index Didacticorum.

Spooks on the hard drives

It is possible to regularly spend many working weeks on just keeping one’s special area bibliography up to date internationally. General, non-specific tools, now offered by many universities, do not help much. Their metadata have not been generated with specialist understanding and their collections are boundless. This means that we all have to maintain our own literature lists. University professors who are obliged to generally stay up to date in their special area are confronted with the necessity of continually filtering the ever-rising number of publications, which can lead to breathlessness or even resignation. For doctoral students or post-docs, compiling bibliographies which can still be very project-related, so that a certain degree of completeness, order, hypertextuality, and operationalization are achievable, for the moment. But this kind of success is transient and ends abruptly at the end of the project. One can thus imagine that working on specialist bibliographies is like being in an enormous, decentralised cemetery of sad project bibliographies that slowly become older and more obsolete until they finally come to their eternal rest in the cool depths of our hard drives, even though they may wander, like spooks, for a long time in the memories of their creators.

What the Index Didacticorum (I.D.) is

The Index is a collaborative bibliographic database, accessible at all times for everybody, whose technology can be understood intuitively by everyone, that defines choices and orders of categories according to disciplines, that enables access to its contents via multiple search options, whose data set quality is ensured by an editorial team of specialists[1] and which is, nevertheless, not an undertaking of individuals but, at best, of all disciplinary participants: this seemed to be the appropriate response to the basic problem described.

The Index Didacticorum has been online since September 2015. It started with 6200 titles and currently (27.10.15) already encompasses 6655 titles. The collaborative idea has been successful, to date. 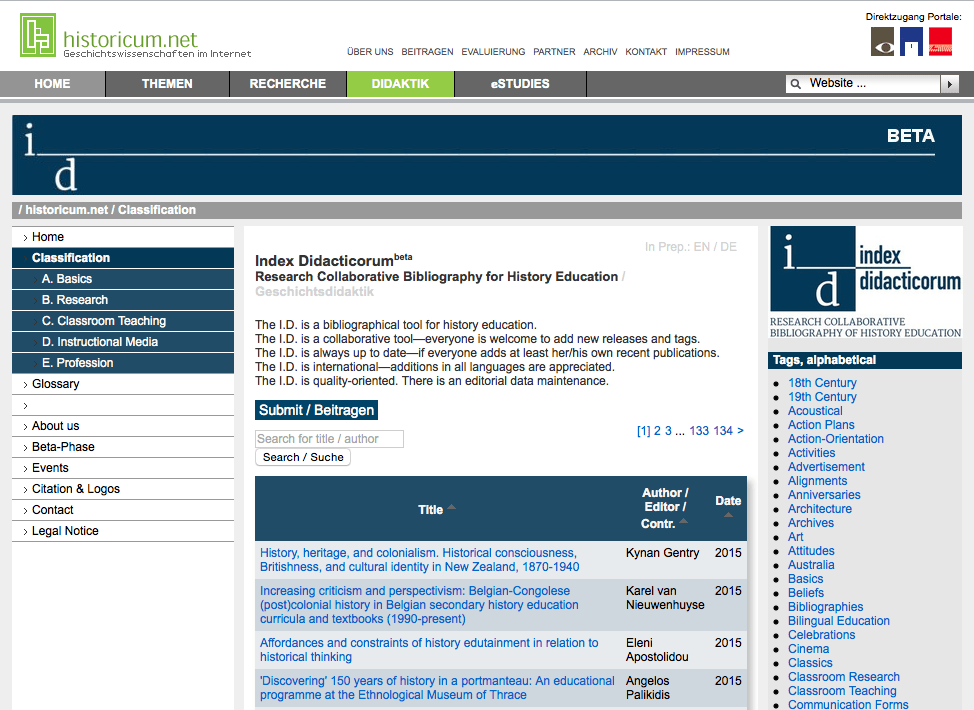 There are four ways to search the contents:

– via a simple search box, like those in today’s search engines, whose query combinations are, momentarily, still restricted;
– via the alphabetical list of categories/tags;
– via the classification menu that extends down through four structural levels and automatically selects relevant data bases; a survey of the classifications that are used, their translations and organisation can be found under “Glossary”[2]; as well as
– via the links to tags/categories at the lower edge of the item display.

Submitting new titles is very easy: all that is required is to click on “Submit/Beitragen” and then to follow the Index’s menu suggestions. The suggested titles are then moved to a work platform (backend). Users can be sure that the editors first check the suggestions for correctness, particularly with respect to the categorisation, and then activate them.

How the I.D. came into being

The process of the technical and conceptual development has been running since 2012; however, the preparatory bibliographic work started much earlier. The surface of the Index Didacticorum does not reveal anything about the expensive and complex developmental work that was required to achieve just this beta version. Technically, the Index is an interface that transfers a selection of features from Zotero©[3] to the user-friendly and intuitively simple Web interface of Historicum.net, which itself operates as CMS (Typo3©).

Intensive cooperation between three institutions was required to create this product: the Centre for Electronic Publishing at the Bavarian State Library (director: Gregor Horstkemper)[4] that also hosts this collaborative tool, the Chair for the Didactics of History at the Duisburg-Essen University (chairperson: Markus Bernhardt), and the Chair for the Didactics of Social Sciences at the School of Education FNHW in Basle and its region (chairperson: Marko Demantowsky).

What the I.D, still needs

All of the initially planned features could not be realised in the first phase because of the complexity and the costs of the developmental work. It thus seemed reasonable to place more emphasis on the beta version that is, in any case, fundamental for public testing, and to delay the introduction of important features until the autumn of 2016. It turned out, unfortunately, that some of the characteristics of scientific bibliographies were also too expensive to program in the first step. The current plan is to reprogram them by September 2016. The issues involved here relate to, in particular:

– the fact that second and third authors can only be keyed in provisionally but then, despite their presence in the data base, they do not appear in the Index. Nevertheless, titles for these non-visible authors can be accessed via a personal (author’s name) search query;
– the time it takes to activate the Index and search queries (process speed is too slow); and, finally,
– the desire to create a citation from the relevant data set that can be copied into a publication.

However, the implementation of novel characteristics is also planned for the beta phase. These include:

– allowing data base users to add self-chosen categories to existing entries directly. This would make it possible to create personal, customised bibliographies for specific situations (courses, projects, conferences, etc.);
– providing the simple technical option of re-importing individual data sets into the users’ own Zotero© directories; and furthermore,
– creating an additional, complete version of the Index in German.

What is now important

Despite its teething troubles, the Index is already a helpful instrument for teaching and research in the didactics of history. This is due both to the number of titles it encompasses and to its penetration of the data corpus, in terms of categories, as well as its accessibility. However, the Index can only deploy its real value as a potentially comprehensive tool that does not become out dated if it receives more collaborative momentum, i.e., if every history educationalist submits his or her own new publications and, maybe, over time, adds missing titles to the data base. The Index is an offering for everybody; we can only make it the tool that it can become if we do it collectively.