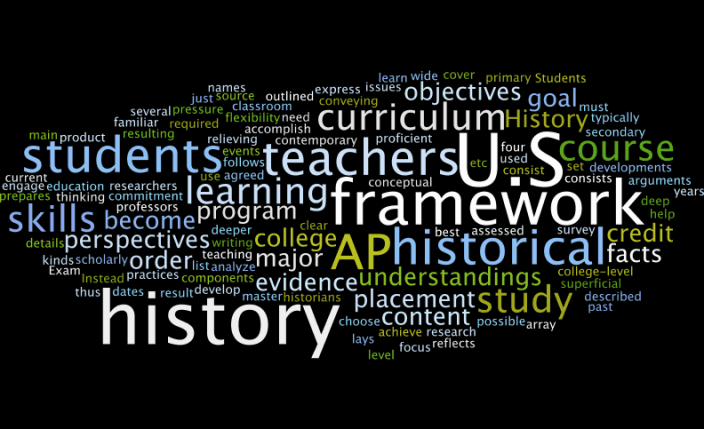 Abstract: In February, Oklahoma state legislators considered a bill declaring an “emergency” in the U.S. history curriculum. Seeing an immediate threat to “the preservation of the public peace, health and safety,” the proposed law prohibited state funds supporting the delivery of the revised Advanced Placement U.S. History course and called for a replacement course.[1] – An emergency! That threatened public health and safety! What was all this about?
DOI: dx.doi.org/10.1515/phw-2015-4059.
Languages: English, Deutsch


In February, Oklahoma state legislators considered a bill declaring an “emergency” in the U.S. history curriculum. Seeing an immediate threat to “the preservation of the public peace, health and safety,” the proposed law prohibited state funds supporting the delivery of the revised Advanced Placement U.S. History course and called for a replacement course.[1] – An emergency! That threatened public health and safety! What was all this about?

A new course on U.S. history

Advanced Placement U.S. History[2]—a course overseen by the College Board[3] and known as APUSH—is intended to offer high school students a college-level experience with history and is one of 30 plus tests offered in the subject-areas across the nation. Students can take a test administered by the College Board at the end of the course and, with a high score, are often eligible for college credits when they enroll in universities.

APUSH was recently revised and 2014-2015 is the first year that teachers are teaching the new course and that students will take the revised test. The revision process took more than four years and notably, historians and APUSH teachers led the redesign of the course.

What are the changes?

Historical thinking concepts (i.e., contextualization, crafting historical arguments from historical evidence) lead the course description,[4] heralding a new focus on teaching the skills and processes integral to the discipline. This new focus is also seen in the test where the multiple choice questions now use stimuli such as primary sources to challenge students to reason “in tandem” with knowledge, rather than merely to recall.[5] The document tells of how the authors intentionally created a framework with no list of specifics and no “particular political position or interpretation of history,” but one that “reflects current scholarship and advances in the discipline.”[6]

Not surprisingly, almost as soon as the course was finalized, conservatives criticized it.[7] Indeed, in August, 2014, The Republican National Committee [RNC] adopted a resolution[8] that included calling for a delay in implementing the course, investigation by state legislatures, and withholding any federal funding for the College Board until a new framework that allowed students to learn the “true history of their country” was developed. They claimed that the framework was “a biased and inaccurate view of many important events” and a “radically revisionist approach” that emphasized “negative aspects” of the country’s past.[9] The RNC pledged that all Republican legislators and state offices would receive a copy of this resolution, effectively canvasing the land with its stand against the new framework.

So when Oklahoma legislators called this a public health emergency, they were on that bandwagon. Prior to February, there were similar efforts in other states (e.g., Georgia, Texas) to scuttle the course. In Colorado, a local school board protested the course and I heard from one colleague (an Army veteran) that he had been called unpatriotic, given that he was teaching APUSH.

The response to these attacks on the new course has also been swift. The College Board opened a forum for public comment, released a sample test to show the criticisms as unfounded, and the framework’s main authors responded in a letter calling the criticisms “uninformed.” [10] The President of the American Historical Association spoke out in the national press[11] and students walked out of their classrooms in Jefferson County, Colorado, to protest the censoring of the curriculum.

What’s this argument about?

Proponents and advocates are not thinking about the discipline in the same way, nor do they agree on the nature of the civic purposes for studying history. Critics lament the loss of a narrative of American exceptionalism and list people and events that should be mentioned in the APUSH document. Authors and advocates call the document a “framework,” intentionally start it with historical thinking concepts and, don’t embrace a single particular narrative (e.g., the course calls for the study of periodization as an interpretive tool that helps shape the narratives we tell about the American past).

One might generously see the differences between the sides as reflective of a gap between “school history” and academic history. When critics call for one “true history” and critique revisionism maybe they are just showing that they haven’t learned the disciplinary methods that are used to know the past? Or that historical narratives can change with new evidence, lenses, and questions?

But I don’t think so. Conservatives assert that the framework “politicizes” history,[12] but it seems the attack rather than the course that is political. The RNC took a stand on a voluntary academic course that is designed to represent the discipline as scholars understand it, and asked state legislatures to scrutinize it. When politicians bemoan the loss of the story of American exceptionalism, a story that glorifies the nation, and call contrary content overly negative, it is hard not to see this fight as one between what David Lowenthal called “heritage” and “history.”[13]

These attacks are also likely about more than this APUSH course. Among other things, they reflect ongoing national struggles over federal and state powers in education and conservative claims that modern college environments silence their views.[14]

Whatever they’re about, this recent version of the “history wars” demonstrates that the APUSH framework is on target with its focus on historical thinking skills.

If we teach history as one unimpeachable story in our schools, then students are unprepared for making sense of the arguments over the past that routinely happen in the public arena. Whether it be this dispute or another, students will become adults who will confront contested narratives. History education needs to prepare students to navigate, interrogate, and understand those narratives.

Teaching for historical thinking helps prepare students for their public lives and civic participation, but it rests on an assumption that we need independently thinking citizens, who ask questions of narratives, demand evidence, seek out multiple perspectives, and contextualize events and issues in both what came before and what is happening now. This view of citizen may, indeed, be where the deep differences lie in this debate over APUSH—what the sides think a prepared citizen looks like.

This image was created in May 2015 by Daisy Martin with Wordle (http://www.wordle.net) and the text from the Introduction to the new APUSH course.