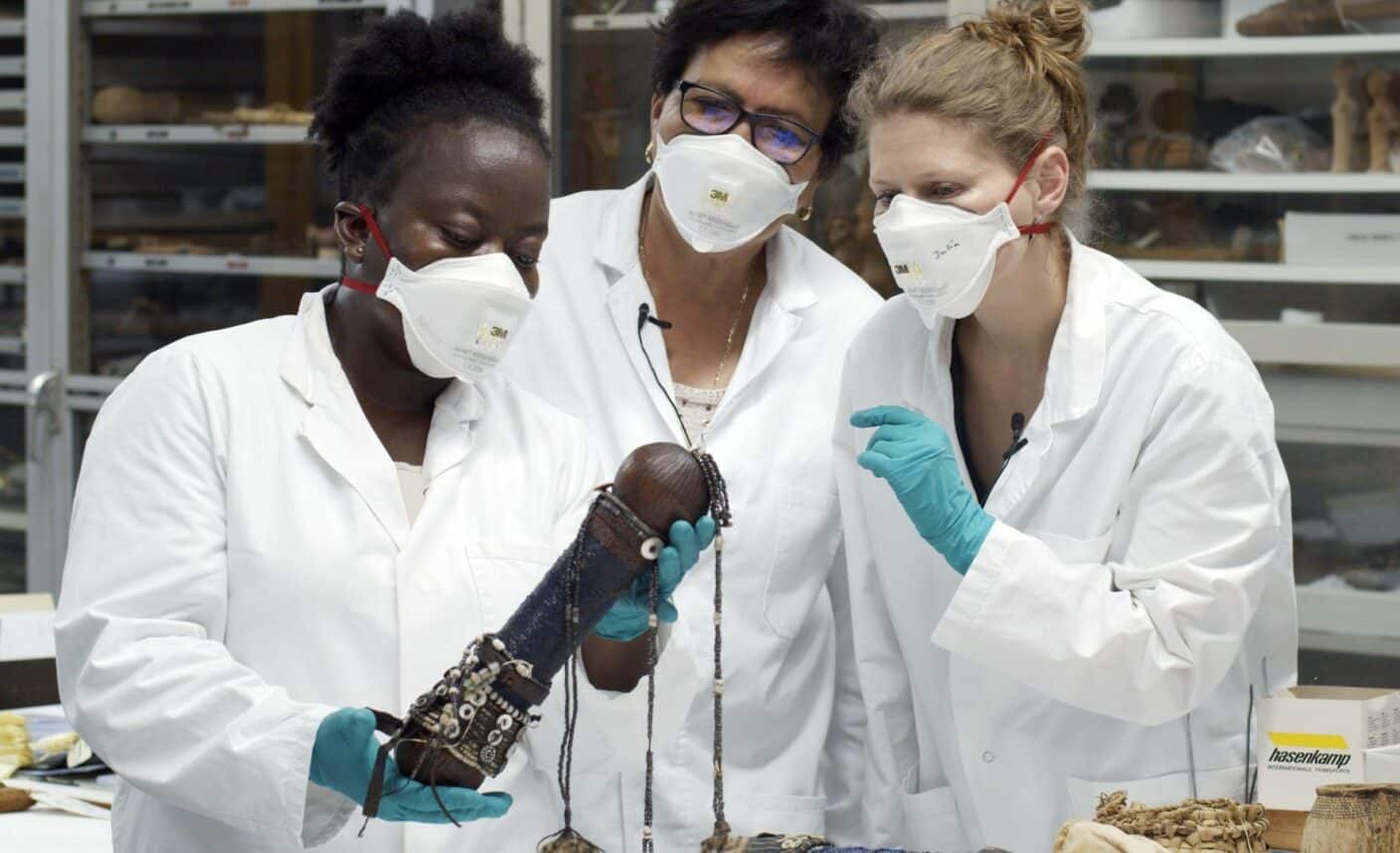 Abstract: How can officially valid historiography be decolonized in a German cultural institution which is the exhibition site for Berlin’s historical ethnological collections? What can the Humboldt Forum, which has been at the center of public debate for years, actually offer? Should we be speaking of just the one history, or is it not rather a matter of constituting a meeting point for several different, contradictory representations of what has been, in order for us to decide together on what is to come? It is the small details in the beginning which influence the outcome.
DOI: dx.doi.org/10.1515/phw-2021-19024
Languages: English, German


What does “decolonizing public [in the sense of universally valid] history” mean? And how can this succeed? Colonial and racist systems of violence and injustice, which reach into the present, cannot be limited to economic exploitation, political domination, and violent oppression. They extend to all social spheres of the system that establishes an order, justifies it, and profits from it. In this context, it is especially the generally prevailing, unquestioned framework of thought, and perception, the underlying “order of things” (as Foucault describes it), and – one could add – the view of these entities that to a certain degree subtly and unconsciously support and justify these systems.

From “History” to “Histories”

This filtered knowledge and the prevailing intellectual discourses are built on a historical a priori, a generally accepted, unquestioned “public history”. It is not without reason that “history” – when describing the one political, cultural, and social development of a geographical region, a continent, a culture, or a nation – only exists in the German language in the singular. This is because the term claims absolute objectivity for itself and as such, there can be only one. “Stories” in the plural, on the other hand, denote in German (fictional and) highly subjective narratives or legends, so-called “Märe”, which do not profess to be authentic. Already, this established reading highlights the dominance and dependence of the prevailing systems of knowledge and cognition in their extended reality.

Therefore, a necessary and comprehensive decolonization movement is also an intellectual project in several respects. This is because it entails recognizing and analyzing colonial structures, functional contexts, and tendencies, making their proliferation visible in all social spheres down to the smallest contexts, and pointing out possibilities to break through and reshape them – in the sense of a respected, equal and fundamentally solidary, non-violent co-creation of social, political, ecological, and economic decisions of global dimensions. It starts on a small scale, in daily interaction with each other, with resources, with information, indeed with conscious decisions made by everyone.

Decolonizing the Museum – A Utopia?

At this point, the following question arises: How can the Berlin Humboldt Forum make visible and transculturally thwart the claim to validity of a supposedly universally recognized, singular public history? How can it shake it up and show alternatives in a plurality of valid and self-establishing histories from other perspectives? How can it make this/these plural history/histories more widely known? How can a mobile, anarchic entity emerge from it?

Are a decolonial approach and method possible in a cultural institution that is closely connected to – and associated with – historical ethnological collections? After all, exhibition presentations of ethnographica, material objects of so-called “foreign” cultures, particularly represent this epistemological concept of an appropriation of the world in the hierarchical, asymmetrical relation of subject and the “object” under consideration, in the juxtaposition of “own” with “foreign”. Thus, the collections also depict a long-running, centuries-old Eurocentrism as well as prevailing colonial interests, often unconsciously reproducing dominant narratives of a hegemony of whatever kind. One could therefore ask whether or not the exhibition practice as such opposes this approach. Indeed, postcolonial criticism of museums begins far earlier than with the material and ideal appropriation of objects of supposedly “other” cultures – with the concepts of knowledge transfer on which the museum as an institution is based.

How, then, might decolonial perspectives be imagined for the Humboldt Forum? What does the Humboldt Forum see itself as in the first place? How can the frameworks which allow debates to be held be established? And what are the challenges at the interface between museum, cultural centre, and meeting place?

Decolonization as a Process at the Humboldt Forum

From an internal perspective, the Humboldt Forum is first and foremost recognizable as an endeavor in which a considerably large number of very different and, to a certain extent, changing individuals (groups), institutions, and interests are involved. Four actors shape the programmatic orientation of the house in the areas of exhibitions, events, education, and outreach, as well as science and research: the National Museums in Berlin / Prussian Cultural Heritage Foundation, the Humboldt-University of Berlin, the Stiftung Stadtmuseum Berlin, and the Humboldt Forum Foundation in the Berlin Palace. A program guideline that both preserves the diversity of interests of these very different partners, their expertise and thematic focus, and creates something common out of it, requires a high degree of coordination, of understanding, but also of trust. This by no means simple way to find a pluralistic togetherness is an indispensable learning process for an equal and solidary coming together, from which a valuable synergy can grow, and which is more than “the sum of its individual parts”.

In a recent declaration by the management of these institutions, the common thematic fields, and content-related goals of the Humboldt Forum – for cultures, arts, sciences, for exchange and debate – were formulated.[1] The critical reappraisal of colonialism and coloniality, the preoccupation with post-colonial criticism and decolonization as a method have been formulated here as central core themes. This always also means the criticism of structures, the critical reflection of one’s own position and the circumstances from which one acts, as well as the search for possibilities of change.

In a joint mission statement, a representative cross-section of employees from various functional areas of these four institutions involved in the Humboldt Forum have agreed on fundamental maxims for action and cooperation.[2] The diversity of positions and perspectives, participation in the spirit of the Forum, the space for controversy and the inspiring spirit of experimentation are declared to be the essential components that must be safeguarded – in the program work and in daily activities and actions. This is a beginning, a start so to speak.

Another fact that guarantees ongoing debate and critical questioning is the controversial structural design of the Humboldt Forum. After all, three of its exterior facades as well as the cubature of the building are a faithful reconstruction of the former Berlin Palace. It was heavily destroyed during the Second World War and demolished by the government of the German Democratic Republic (GDR) in the early 1950s. Its reconstruction as a cultural center and, moreover, as the building which is to succeed the Palace of the Republic – a landmark of the GDR – poses great challenges for the Humboldt Forum. It has the permanent responsibility to critically deal with the histories of the site which are steeped in repression and occupation – once again as an exhibition venue for the ethnological collections and the historical collections of Asian art.

Irritations as a Chance for Change

The inherent tension results from a massive structure, the monumental memory of the Prussian, imperial center of power, and the boundless, divisible, libertarian diversity of form and knowledge within it, which allies itself and resists all hierarchies, orders, and categorizations to constantly recreate itself. It is this interweaving of artistic forms, of thought and relationships, and this inherent power of entities with which we want to engage – in transcultural collaborations, in a renegotiation of interpretive sovereignty, in memory work, in a wide opening of approaches. A decolonization begins in the project structure, in transparent decisions, and in the extensive involvement of all participants from the very beginning. In long-term relationships and cooperations with representatives of the societies of origin and in international partnerships, in programs and offers, in analyses and sciences, such as provenance research, and by means of a practice of sharing, in forward-looking interaction with the visitors and participants, the program will emerge in the future in continuous learning processes. They can be painful and irritating, they can fail in detail, create ruptures and new constellations, they will require more resources, time, and patience; but they will also become an urgent necessity for us by shaping and changing us in a permanent manner.

Nehoa Kautondokwa, Cynthia Schimming, and Julia Binter in the depot of the Ethnological Museum Berlin. Since 2019, curators, provenance researchers, scientists, and artists from Germany and Namibia have been conducting research on the collections from Namibia at the Ethnological Museum of the Staatliche Museen zu Berlin. An exhibition on the cooperation process entitled “Confronting Colonial Pasts, Envisioning Creative Futures” can be seen at the Humboldt Forum. Film still from “Tracing Namibian-German Collaborations”, a film by Moritz Fehr © Staatliche Museen zu Berlin 2020.