The Decolonization of the “Conquest” in Mexico 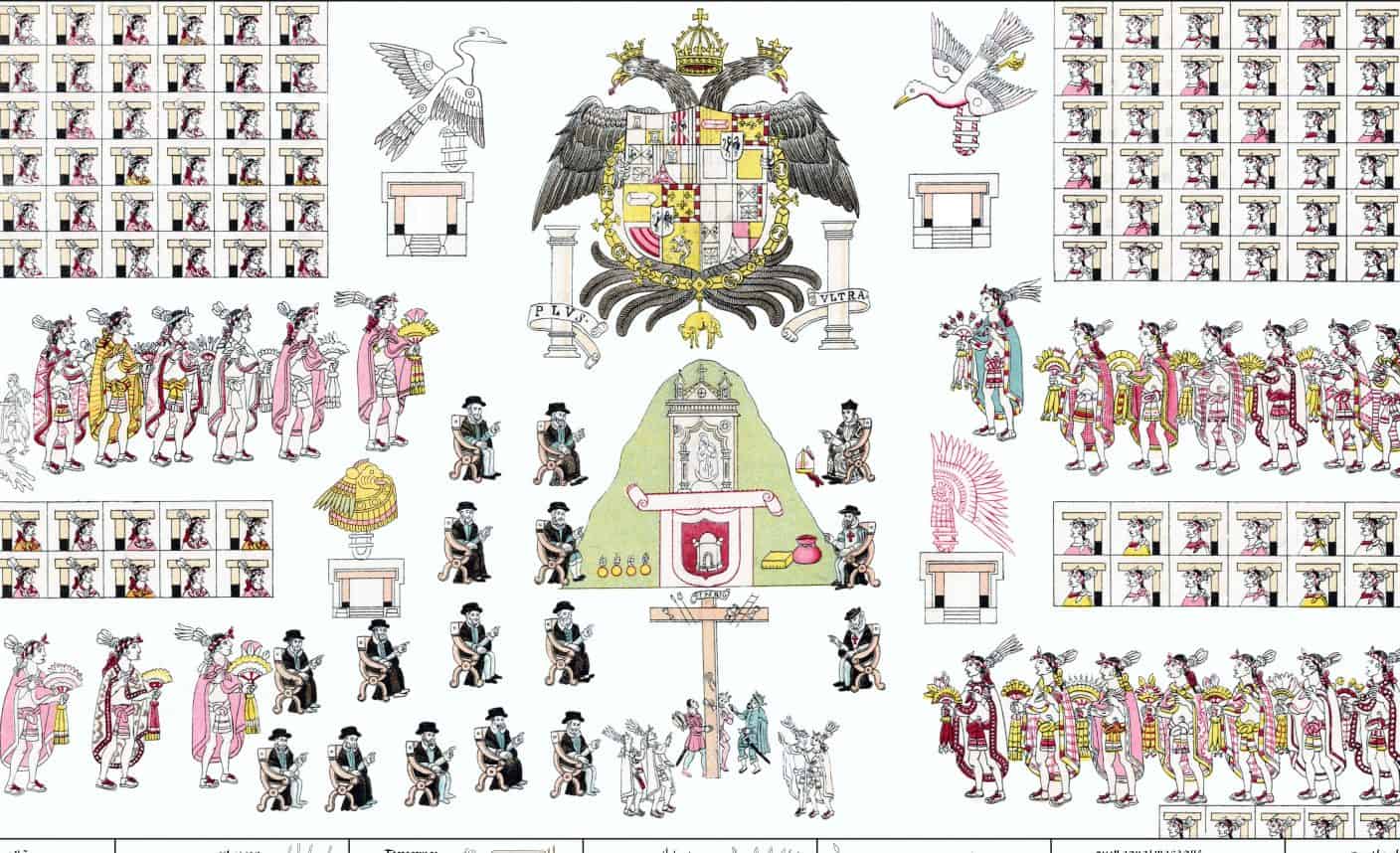 Abstract: The political leadership of Mexico is using the country’s double anniversary in 2021 to decolonize its Public History. The Spanish conquest in 1521 and the gaining of independence in 1821 are to be reinterpreted as “500 years of indigenous resistance”. Politicians, indigenous people, and international scholars are all taking part in controversial debates about how to interpret Mexican sovereignty.
DOI: dx.doi.org/10.1515/phw-2021-19017
Languages: English, German

In Mexico, the year 2021 is marked by a double anniversary: people are commemorating the final conquest of the city Tenochtitlán and thus the fall of the Aztec Empire (1521) as well as the end of the Mexican War of Independence (1821). In the midst of the preparations, the commemorations have been the topic of controversial debates: Who really conquered the city,  how are the conquest and its consequences to be interpreted, and who has the authority to do so?

From Clovis I to Eight Deer Jaguar Claw

With a few exceptions, the Spaniards burnt the written records of the pre-Hispanic Mesoamerican elite. Of the 14 screen folds that have been preserved, 13 are now in European institutions. As a small group of international researchers, we studied the codices with historical-genealogical content in the late 1970s. A figure called ‘Eight Deer Jaguar Claw’ was identified as the most important ruler of the Mixtecs. After several bloody campaigns of conquest, he ruled parts of Oaxaca in the 12th century.

While doing field work with the Mixtecs in 1977, with the aim of locating the kingdoms listed in the codices, I came across a history textbook in an elementary school. In it, I read about the Franks and the Saxons, the Merovingian dynasty, and the kings Clovis and Otto.

It was absurd. While we were tracing a Mixtec hero, the usurper of the Tilantongo dynasty who had conquered 94 principalities and united three Mixtec kingdoms, his descendants in the 20th century were now studying the history of kings who had ruled in distant Europe centuries before the arrival of the Spanish in Mexico.

Since then however, things have changed: Eight Deer Jaguar Claw has not only made it into the Mixteca history books and is well known in the migrant communities of California, but he has also been included in Wikipedia entries in several world languages, thereby constituting an example of the successful public decolonization of national historiography.

Who defeated the Aztecs?

It is not just the official political line which is using the double anniversary to question the history of the Spanish conquest and its consequences. Science, media, TV series, and the game industry are all contributing to a new multidirectional memory. While the destruction of the Aztec Empire and the founding of the Christian colony of New Spain have hitherto been viewed as painful yet necessary premises for the establishment of the republic of Mexico (that is, the mestizo republic), the political leadership in Mexico is currently mandating a reversal of the commemorative culture. The official interpretation is no longer 500 years of the “Spanish conquest”, but of “indigenous resistance”. In 2019, the Mexican President Andrés Lopez Obrador even called on the King Philip VI of Spain and Pope Francis to apologize for the atrocities committed by the conquerors and to send the codices to Mexico on loan for an anniversary exhibition. The harsh tone of the Spanish response was insensitive, but even the Pope waved the issue aside; in fact, a national law would have prevented the “loaned items” from being returned to Europe.

Whether the dozen or so pictorial manuscripts were only preserved by being sent to Europe, including the Vatican, and thus spared from destruction during the bloody struggles of Mexico’s troubled post-colonial history, is subject to speculation.

Initially, the anniversary year was to be dedicated to three dates: 1) The founding of Mexico-Tenochtitlán, supposedly in 1321; 2) The final conquest of the city by the Spaniards and their native allies, and the victory over the Aztecs on August 13, 1521; and 3) The end of the struggle for independence on September 27, 1821.

The alleged founding date of the Aztec capital cannot be dated to the exact year. The other two verified dates are open to controversial interpretation.[1] The Mexican historian Federico Navarrete, for example, questions what actually happened in 1521 exactly, whether it was a “legitimate” conquest, an ambush and invasion, or the uprising of oppressed peoples i.e. rebellion against the brutal Aztec rule.[2]

Navarrete believes that the Spaniards instigated a great war, the likes of which had never been seen in Mesoamerica, by forming a coalition with recently subjugated and rival ruling houses of the Aztecs. Moctezuma was not afraid of the Spaniards, but of the strength of this incalculable coalition, and sought a solution in negotiations. The Spaniards, for their part, behaved “like gangsters who bluffed the whole world, everyone wanted to appease them. In fact, however, the Spaniards were 100% dependent on the indigenous peoples to survive, move around, and get to the nearest town in order to be able to bargain. Therefore, on August 13, 1521, Cortés imagined that he was the commander and conqueror. But I think that, in reality, it was the indigenous people who won the war of 1521, who in turn came to believe ‘We are the allies of this guy, and later, we will probably form the Triple Alliance’ [City States of Tenochtitlan, Texcoco, and Tlacopan].”[3]

The indigenous concept of negotiating claims to power on a horizontal level collided in the crucial years 1519-21 with the aspiration of the Spaniards to achieve victory and then reign alone as colonial rulers, which subsequently led to prolonged conflicts over power and territorial distribution, which were to unsettle the country for 500 years.

With regards to the debate concerning a reassessment of indigenous participation in the Conquest and its consequences, both their descendants and even international historians such as Matthew Restall have contributed. However, it is a fact that from 1521 onwards, a Spanish colonial administration was established immediately, and the indigenous population was both evangelized by force and decimated by imported epidemics. Mestizaje began when the Spaniards set foot on Mesoamerican soil and began trading with its inhabitants, this being especially true for the trade in women, whose crucial role as founders of Mestizo Mexico only came into focus a few years ago. Although texts and picture sources by no means hide their influence, traditional history books focus on the role of the traitor “Malinche”, Cortés’ slave and lover Marina, who allegedly brought about the victory over the Aztecs through her manipulative translations and whisperings.[4]

Who Has the Authority to Interpret Mesoamerican History?

The utopia of a perfect, primeval world of some “pre-Columbian” Mesoamerica never existed. The by no means peaceful indigenous societies were involved in conflicts that continued after the conquest.[5]

The current view on the events of 1521 has consequences for the categorization of the third date, namely independence from the colonial power Spain and the establishment of the Republic of Mexico in 1810-1821.

On the one hand, the liberation of the mestizo majority from Spanish exploitation and political paternalism was costly, whereby old Creole power structures still continued to persist; on the other hand, the living conditions and rights of indigenous minorities hardly changed. At least, however, indigenous languages and traditions have since been promoted, and the Aztec-centric perspective expanded to include all indigenous groups.[6] The legacy of the Spaniards, however, continues to be held in high regard by the far-right.

The scientific community exploring the Mesoamerican legacy in Mexico today is most vibrant. New interpretations aim by no means only for the decolonization of historical research, but also target the concepts of Western anthropology such as the human sacrifice in Mesoamerica. However, Mexican researchers still prefer to further educate themselves at North American or European universities. So, who does really determine the current interpretative sovereignty?

The early colonial period is certainly a challenge for research; Spanish sources, with their colonial intentions, are complemented by those of the literate indigenous elite. These were also inferior to the Spaniards because they could not obtain a true picture of the unknown world of Renaissance-era Europe, and they were not aware that the Christianization and abolition of their Mesoamerican religion were non-negotiable for the Spaniards. Once baptized however, the indigenous leaders quickly learned to make themselves both irreplaceable for the colonial administrators and certainly manipulative, for example in the constant exploitation of the local labourers stricken by pandemics.

In the long term, however, mestization resulted in new survival strategies. Local “caciques” – indigenous leaders – used adaptation and assimilation to maintain their own power, but became entangled in internal land conflicts that lasted for centuries after the end of the colonial era. Having been documented as texts and images, they offer a real treasure trove for historians.

Ultimately however, the answer to the question of what the political Mexico of 2021 understands by “500 years of indigenous resistance” remains vague.[7]

The original from 1550 measuring approx. 2×5 meters no longer exists. The document tells the story of the conquest of Mexico from the perspective of the Tlaxcaltecs, archenemies of the Aztecs and allies of the Spaniards © Public Domain via Commons.