The Anthropocene and the Need for a Crisis in Teaching 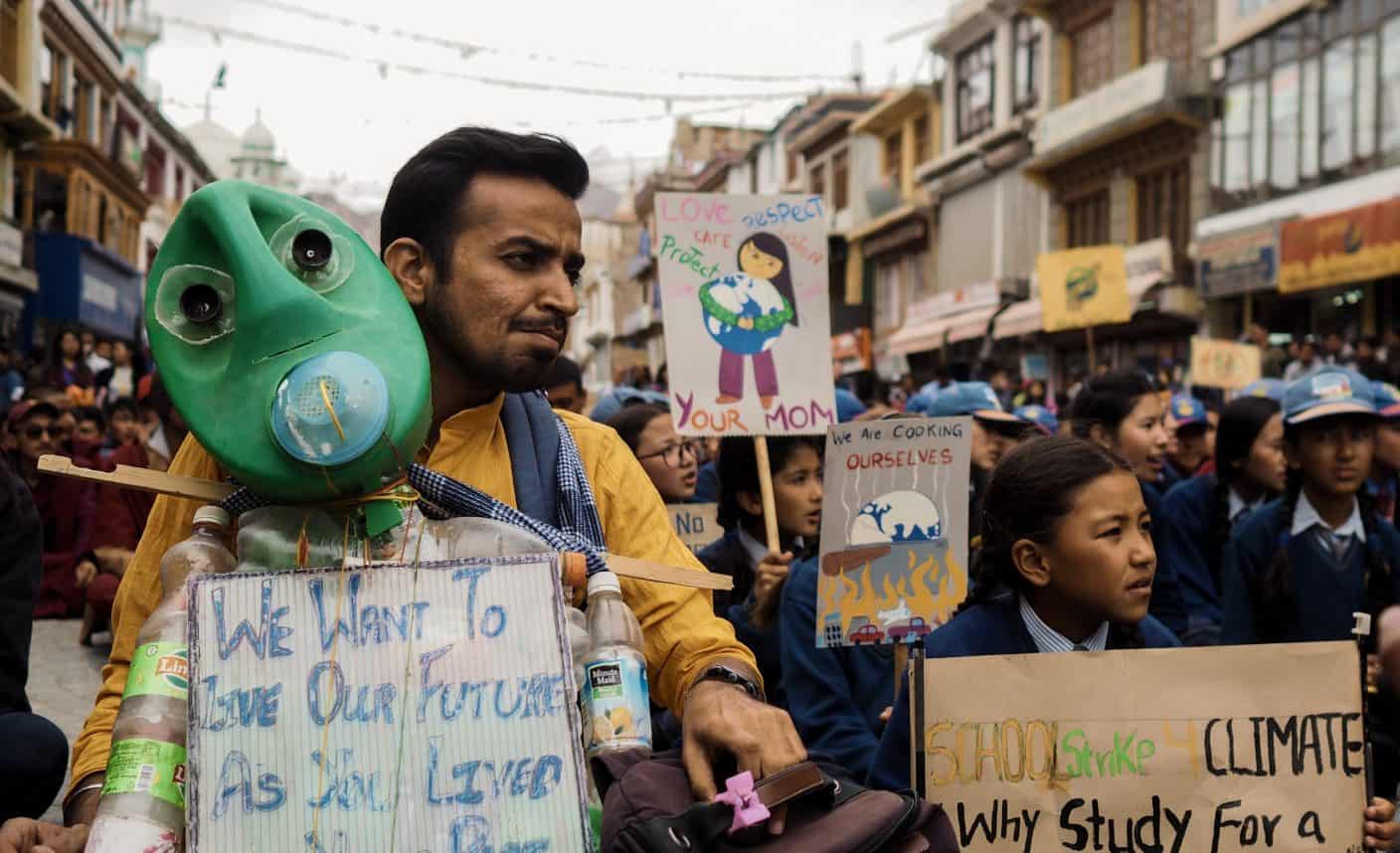 Abstract:
Humanity’s ecological footprint has come to threaten the earth’s planetary system. Exponential population growth, energy consumption and mass production have led to critical tipping points that endanger central ecological systems. Processes already initiated will continue to harm life on earth beyond the foreseeable future. To reduce the human impact on the environment, profound lifestyle alterations are necessary. Thus, crisis awareness must go beyond the present and take root in our historical consciousness; crisis is temporary, but learning to live with the consequences will be long term. Nonetheless, history education continues to be arranged around the same anthropocentric and methodological nationalism that dominated modern historicism.
DOI: dx.doi.org/10.1515/phw-2021-17397.
Language: English

Humanity’s ecological footprint has come to threaten the earth’s planetary system. Exponential population growth, energy consumption and mass production have led to critical tipping points that endanger central ecological systems.[1] Processes already initiated will continue to harm life on earth beyond the foreseeable future. To reduce the human impact on the environment, profound lifestyle alterations are necessary.[2] Thus, crisis awareness must go beyond the present and take root in our historical consciousness; crisis is temporary, but learning to live with the consequences will be long term. Nonetheless, history education continues to be arranged around the same anthropocentric and methodological nationalism that dominated modern historicism.

History education carries a dark heritage as a servant of grand narratives. In general, educators are sceptical of grand narratives, but for good reasons – it is easy to agree when Sirkka Ahonen emphasises that such narratives ‘are unsustainable as truths and socially exclusive as identity builders’.[3] Sound educational strategies are, rather, intended to debunk single narratives and promote historical thinking and multiperspectivity.[4] That being said, the problem, is perhaps not the single narrative so much as the meta-narrative schema which orders and explains knowledge and experience on a deeper level.[5] Multiperspectivity may eliminate this belief in single narratives. However, it could not abolish the methodological nationalism that continues to cast its orderly shadow.

The Anthropocene pushes historical time in two opposite directions, both of which are outside the comfort zone of history teaching. The geological dimension of the concept pushes towards humanity’s early history and the ‘longue durée‘ of climate and natural changes. The specific start of the Anthropocene, however, pushes towards contemporary history and begins with the industrialisation, or even more so with the great acceleration after 1945. Without a compelling narrative, the rest will be of mere sentimental interest.

It is sometimes argued that the Anthropocene cannot, or should not, be narrated, because while history can explore aspects of climate injustice, the Anthropocene demands immediate action.[6] Zoltan Boldizsar Simon argues that history and nature reflect different logics of temporality, conceptions of change and modes of action, and that ‘Anthropocene is a condition about which no stories can be told’.[7] The tensions and differences that Simon identifies are real; however, we should be cautious not to mystify the Anthropocene condition. The scale of loss and suffering due to human impact on the environment is probably incomprehensible, but its causes and processes are not. What we can understand, we need to tell. It is true that the way out of poverty, we know, comes with higher energy consumption, but it is also true that due to number, injustice, poverty and migration are also drivers of the Anthropocene. Rather than collapsing the narrative, distribution of resources and power is a thread that can combine the geological and the historical. However, there is a need for a plot involving a broader set of resources, actors and conflicts.

As an epochal term, the Anthropocene construes a matrix for such a new master narrative. This is not to say that all history should be cast in an overgeneralised genealogical template, but rather to emphasise that nature, migration and cultural encounters must be the crux around which narratives of the school subject are propagated. Multiperspectivity is central to understanding conflicting perspectives, but it is not a rationale for selecting and arranging what is to be studied.

If the Anthropocene epoch carries a fundamental grid for a new master narrative, it also stirs up binaries in historical explanations and narratives, such as between the universal and particular. The Anthropocene is a different kind of periodisation. It does not start with an embryonic trajectory of empires, nation-building modernity or information technology. Instead, it begins with a wicked problem, first identifying a reluctant and divided humanity as a geological force, then it reintroduces the earth as a historical actor, disrupting the notion that culture has overcome nature.

Dipesh Chakrabarty cautiously pointed out that humanity’s impact on ecosystems creates a new condition for common political interests.[8] Such a notion of universalism is, however, widely contested, along with the term Anthropocene itself. Andreas Malm and Alf Hornborg remind us that ‘in the early 21st century, the poorest 45% of the human population accounted for 7% of emissions, while the richest 7% produced 50%’.’ They ask, ‘Are these basic facts reconcilable with a view of humankind as the new geological agent?[9] From the post-humanist and postcolonial positions, the concept has been criticised for being anthropocentric and universalising what is basically eurocentrism.

Clive Hamilton argues that this criticism misses the point, which somewhat puts the critical theorist in a conservative position, unable to accept that their explanatory models (in this area) become insufficient. The Anthropocene does label not only an increase in exploitation and pollution but also a state in which the earth’s system has never been before.[10] The epoch neither diminishes nor distributes guilt and responsibility. Chakrabarty is concerned about the dilemma between the generalising implications of the Anthropocene and the postcolonial reluctance toward the universal, but insists that it has to be addressed: ‘This is why the planet’s history must become routine in humanists’ critical thought’.[11]

Recontextualising disciplinary knowledge of the Anthropocene into the educational context calls for careful consideration of how to process layers of universalism and particularism. These layers occur in concepts (such as humanity and nature) and explanations (such as causes of the sixth mass extinction), and geopolitical processes (such as in Western colonialism and industrialisation). Layers of universalism will also occur in ethical considerations: Education has to respond to the hope of shared human interest to fight global warming and pollution, but also to the diverging interests due to climate injustice. Jörn Rüsen has suggested a history education based on values of human dignity.[12] Rüsen is right; we need to address universal values in education. However, human dignity might have become too limited in its anthropocentrism and probably need to be accompanied by virtues such as justice, hope and truthfulness[13] to remain critical towards hegemonic discourses.

A crisis is argued to activate our historical consciousness. It is worth reflecting on whether The Anthropocene is a crisis for the genetic formation of historical meaning.  Rüsen defines the genetic logic as ‘based on the idea that change creates or makes meaning’, oriented towards future situations not predefined by the past.[14] But now, changes have come from a blind spot in our experiences, with consequences that limit our expectations of an open future. For a historical consciousness in the Anthropocene, change becomes less an opportunity and more a necessity.

The possibility of history teaching should be understood hermeneutically, as a reciprocal relationship between explanation and what is to be explained. We need to explore what can be powerful historical knowledge to orient in this new normality. As the Anthropocene is not mysterious, we need systematic knowledge and methods to think beyond common sense. However, there must also be a reciprocal influence. As the Anthropocene is unprecedented, it follows that many past and current ways of thinking about history are unlikely to be helpful and need to change. This crisis concerns the relevance of historical learning; we need to see that to explore its potential.