A Museum for Every School! 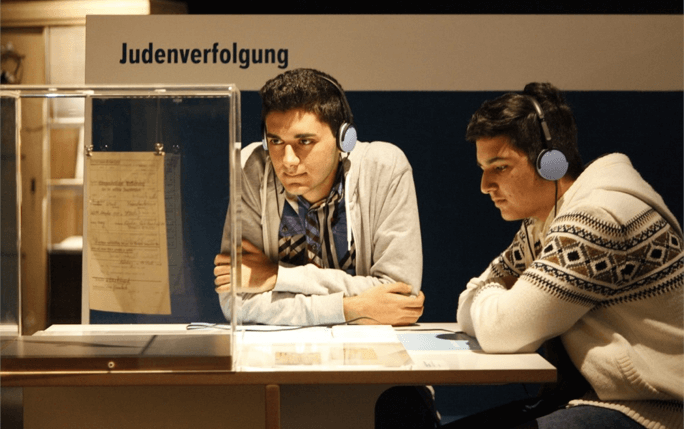 Abstract: Whoever visits schools in Asia, soon knows the traditional procedure: First of all, there is the welcome reception at the large office of the director, and before attending any lessons in the classroom, a visit of the school museum takes place. There, students first explain the history of the school and then its present profile. Why do we have so little historical awareness in German-speaking countries when it comes to school matters?
DOI: dx.doi.org/10.1515/phw-2016-5589.
Languages: English, Deutsch


Whoever visits schools in Asia, soon knows the traditional procedure: First of all, there is the welcome reception at the large office of the director, and before attending any lessons in the classroom, a visit of the school museum takes place. There, students first explain the history of the school and then its present profile. Why do we have so little historical awareness in German-speaking countries when it comes to school matters?

School history and school museum as a great opportunity

It is beyond comprehension that schools in this country rarely take advantage of this great opportunity. Especially today, when schools are required to have their own profiles, history offers the opportunity to support the building of school identity: Where exactly did teaching take place at the school site 60 years ago and 30 years ago? What subjects appeared in the school timetable, and what did the textbooks look like? What has changed since, and what has remained the same, and why is it like this?[1]
Such questions also arouse the interest of parents when they visit schools. Immediately, conversations about their own school experiences, made here and elsewhere, start: what caused their anger and joy – and, of course, how parents would wish schools to be today. Everybody remembers their own school days, and history is part of everyone: This fact provides the best preconditions for exciting conversations.
And, it offers the best preconditions for the students’ historical learning. They can themselves ask questions about the history of their school – the most important object of each school museum – or search for remains and historical sources on site. “Dig where you are standing” is a target-oriented motto for history teaching, also at school.[2] It is exciting to rummage in old notebooks and textbooks of predecessors and, thereby, to explore what preoccupied former students, what they learnt, what they were punished for and in which way. It is also of interest to look at old class photos, to study school chronicles, to read the minutes from teachers’ conferences, or to discuss regulations and to put them in a larger context.[3] In this way a number of relevant questions automatically arise about the current school situation. All of this promotes young peoples’ differentiation of their own historical awareness, also because school history has a strong connection to the learners themselves and to present times.[4]

It is, of course, ideal if an adequate room for a school museum is already planned when a new school building is designed. Perhaps its concept is such that multiple usages are possible and walls do not restrict the room’s partitioning.[5] It is, however, more easily possible to set up a school museum by rededicating a normal classroom. The interior design is oriented towards the exhibition concept: Is it in chronological or thematic order? What topics are particularly well-suited? In this respect, one can actually benefit from many excellent examples, for example, from the traveling exhibition with a learning laboratory from the school museum of Nuremberg on the topic of “Schools in the National Socialism”[6].
This exhibition presents approximately 200 historical documents and objects from that era and makes clear how comprehensive the National Socialists’ attempt to indoctrinate students and teachers was. There are thematic islands about “Schools in the National Socialism”, each of which is symbolized by one object. All the objects were chosen by students themselves, according to their interests. For the theme “enemy images”, a skull and a measuring instrument are displayed in a glass showcase. On the table, at which one can sit comfortably in twos or threes, some notebooks and textbooks that correspond to the object can be inspected. And whoever is particularly interested in the topic goes to the old school cupboards and finds additional materials there or studies the large-format illustrations on the roll-up banners provided close by.

Historical exhibitions recount plausible stories and invite visitors to develop their own stories out of the exhibited objects. If a school is, thus, home to a historical museum of its own, then it is obvious that this encourages students to narrate. For this purpose, history didactics and museum education provide a broad repertoire of options.[7] It is clear that exhibitions in school museums are repeatedly staged differently by students in each new academic year. Anniversaries (building a new school, local and regional history) also constitute invitations for redesigning. Of course, it makes sense that – as mentioned initially – students act as guides through the exhibition and, here and there, explain objects and tell stories. Certainly, there are also opportunities to invite former students to the school museum and let them report about earlier days (entirely in the sense of Oral History). From time to time, parts of the exhibition can be exhibited in the corridors, in the canteen, or in the library. It is also fascinating if a number of topic-related exhibits can be packed into a suitcase. Then the suitcase can travel to a neighboring school museum, and the participating classes can enter into a dialogue with each other about school history, local and regional history. They can, perhaps, then develop an inter-school exhibition for both locations. School museums, of course, can also cooperate with external institutional partners and exchange individual objects, museum suitcases or also entire exhibitions with them. This leads to a stronger inclusion of Public History into schools – entirely in the sense of more recent curricula that explicitly require this.[8] And, a school museum enables students to deal more actively with Public History.

____________________
[1] In volume 1 of the Swiss edition of “Zeitreise”, school and schoolhouse history is dealt with on several pages, for example, on the double page “nah-dran” (close by). “Unser Schulhaus hat Geschichte“ (Our schoolhouse has a history): Fuchs, Karin; Utz, Hans; Gautschi, Peter; et al.: Zeitreise 1. Das Lehrwerk für historisches Lernen im Fachbereich “Räume, Zeiten, Gesellschaften“. Ausgabe für die Schweiz. Baar: Klett und Balmer, 2016. p. 18-19.
[2] “Dig where you are standing” (Gräv där du står, 1978; in German 1989) is the title of the handbook, written by Sven Lindqvist, for exploring one’s own history. The history learning laboratory movement that caused many people to explore their local and personal history originated from it in Scandinavia and, later on, also in Central Europe.
[3] Of course, a close connection is needed between a school museum and a school archive. In many places, an archive exists but it is not exploited with a view to conveying history. Perhaps a school museum could be developed on the basis of the archive or subject-related collections consisting of illustrative material that is no longer in use.
[4] The fact that just these principles are crucial for history teaching is pointed out in: Gautschi, Peter: Guter Geschichtsunterricht: Grundlagen, Erkenntnisse, Hinweise. 3rd Edition. Schwalbach/Ts.: Wochenschau Verlag, 2015 (First Edition 2009).
[5] About “Museum without Walls“: Since my wish that each schoolhouse should have its own museum is perhaps somewhat ambitious, consideration should, however, be given to whether this wish could at least be realized in the Internet. This would then revive the idea of “Un musée sans murs“ as formulated by André Malraux in his book, “Le Musée Imaginaire” (Paris: Gallimard 1947; coll. Folio, 1965). A well-designed and periodically revised website could certainly have an external effect on the school platform. Sadly enough, the fascination of the objects would be largely and that is the reason why this thought was banished into the footnote.
[6] Cf. also the extensive description and the photographs at: http://www.schulmuseum.fau.de/museum/ausstellungen/sonderausstellungen/schule-im-nationalsozialismus.shtml (last accessed February 13, 2016).
[7] Cf. also e.g.: Barricelli, Michele: Schüler erzählen Geschichte. Narrative Kompetenz im Geschichtsunterricht. Schwalbach/Ts.: Wochenschau Verlag, 2005, or Heese, Thorsten: Vergangenheit “begreifen”. Die gegenständliche Quelle im Geschichtsunterricht. Schwalbach/Ts.: Wochenschau Verlag, 2007. The guideline for an exhibition on p.156-159 is particularly recommended here, as well as the further literature recommendations.
[8] In the new Curricula 21, adopted in 2015 for the Swiss-German schools, the entire competence area RZG 7 “analyze and exploit historical culture” encourages such historical learning. One of the competence level formulations, for example, reads: The students are able to guide fellow students through a part of a museum or a historical site and thereby explain chosen objects or sites.” Curriculum 21, subject-specific area curriculum “Spaces, Times, Societies”, p. 14, accessible online at: http://vorlage.lehrplan.ch/gesamtausgabe/Gesamtlehrplan%201%20FS%20Franzoesisch.pdf (last accessed February 14, 2016).

Students at a school study historical sources on the persecution of Jews in the traveling exhibition of the School Museum of Nuremberg. Photography by Giulia Iannicelli. © Schulmuseum Nürnberg, 2015.

« Identity or Brand for the HPBG? “Preussen sells”
A Plea for Historytelling in the Classroom »