Identity or Brand for the HPBG? “Preussen sells” 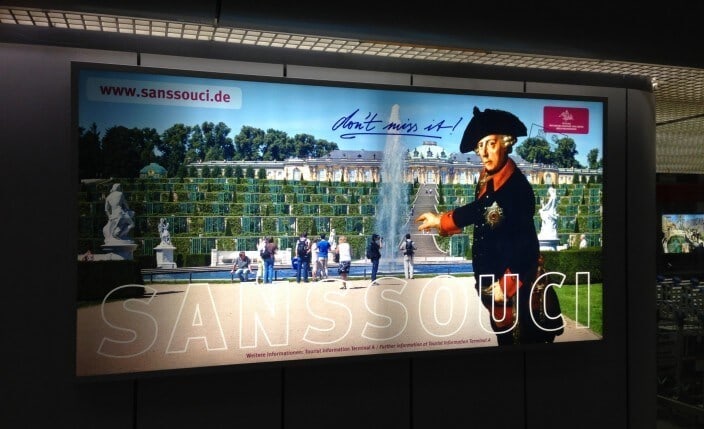 Abstract: State museums such as HPBG are highest-level politico-cultural institutions. Currently, a new conceptual design for the permanent exhibition in the House of the History of Brandenburg-Preußen (Haus der Brandenburgisch-Preußischen Geschichte; HBPG) in Potsdam is being debated. The exhibition has been in place since 2003 and is therefore out-dated, at least from the perspective of exhibition technology. Museum-related didactical innovations alone do not play a role during considerations about the new concept. Instead, economic interests seem to be decisive – a trend that is currently emerging in many publicly financed museums and exhibition venues[1] in Germany.
DOI: dx.doi.org/10.1515/phw-2016-5575.
Languages: English, Deutsch


State museums such as HPBG are highest-level politico-cultural institutions. Currently, a new conceptual design for the permanent exhibition in the House of the History of Brandenburg-Preußen (Haus der Brandenburgisch-Preußischen Geschichte; HBPG) in Potsdam is being debated. The exhibition has been in place since 2003 and is therefore out-dated, at least from the perspective of exhibition technology. Museum-related didactical innovations alone do not play a role during considerations about the new concept. Instead, economic interests seem to be decisive – a trend that is currently emerging in many publicly financed museums and exhibition venues[1] in Germany.

History on the Wane?

History obviously faces difficulties in Brandenburg. Up until the time that the HBPG opened in 2003, long-standing and vehement debates, dating back to 1991, had been conducted about whether there was even a need for an autonomous domicile that dealt comprehensively with the history of Brandenburg and Preußen.[2] The initiative was not received warmly in many places. The HBPG, promoted by Manfred Stolpe, the State Premier at the time, was supposed to fulfil two functions: attract tourists and provide stimuli for Brandenburg’s citizens to examine their own history critically.
After 15 years, the HBPG can report very positive results: the number of visitors is satisfactory – there has been a slight reduction in numbers only for the permanent exhibition, which is quite normal after a decade. This is why Kurt Winkler, the HBPG’s current director, suggested a new conceptual framework. However, it is uncertain if, and how, this initiative will be taken up. Engaging with Brandenburg’s state history obviously still appears to many politicians as being provincial.

Identity in Brandenburg – a Problem?

What is the reason? It may be related to changes in living conditions and opportunities for identity formation in Brandenburg. The Mark Brandenburg has been Preußen’s heartland since 1701. The old spatial structures have undergone modifications since 1815: the province of Brandenburg then came under the direct control of the Prussian government.[3] At the very latest, at the time when Greater Berlin was formed in 1920, the metropolis and the province (Brandenburg) drifted apart incisively. Following Preußen’s dissolution, Brandenburg was not able to look back at its own parliamentary tradition; in 1952, Brandenburg was divided into districts as a result of administrative reforms in the GDR.[4] The State of Brandenburg was then formed in 1990, but without Berlin, the former pivotal focus, without the city that had once played such a central role in Brandenburg; in 1996, the inhabitants decided against an amalgamation with Berlin. Which identity did Brandenburg’s citizens have then, and which one do they have now? Maybe a specific, regional one – at least outside of Potsdam? In any case, many of them are sceptical about Prussian history.

Identity vs. Brand–Cultural Tourism in the Foreground?

Those responsible at the HBPG already recognised this identity problem in 2003,when they were planning the permanent exhibition “Land and People. History and Stories from Brandenburg-Preußen”. Even though the museum is the only comprehensive exhibition venue in Brandenburg,[5] the focus was primarily on the history of its inhabitants and less on the history of Preußen.[6]

The current situation for politico-cultural institutions such as the HBPG is that they have to be in the black. Politicians regard the tourism sector as a major source of income, as the functions that Stolpe intended for the HPBG demonstrate.[7] At the moment, this factor seems to carry more weight: “Preußen sells”. This was most recently obvious in the successful 2012 Friederisiko exhibition organised by the Foundation for Prussian Castles and Gardens (Stiftung Preußische Schlösser und Gärten): Prussian history and Potsdam, the city of Prussian castles and gardens, attracted large numbers of visitors.[8] They would like to see that the Prussian rulers are appropriately represented in the HBPG. They identify Preußen with Brandenburg. The brand “Preußen” is therefore attractive as a marketing strategy and, consequently, it plays an important role in the political deliberations about a new concept for the HBPG.

This makes it easy to suspect that the HPBG will, from now on, be obliged to tell a Prussian success story. But, shouldn’t the great opportunity offered by a new concept be used to make the disruptions in the state’s development accessible, rather than presenting one-sided success stories?[9] Baden-Wuerttemberg’s House of History demonstrates that a state museum can be very successful when it takes the principle of multiple perspectives into account and illustrates negative aspects.[10] The following topics, which have relevance for the present, could be accessed at the HBPG: structural problems in the region (e.g., unemployment in Uckermark), minorities, and migration.[11]

It would also make sense to derive, historically, why many of the current residents identify more strongly with local regions than with the state, as a whole, and to demonstrate that awareness of the state has changed over time in many social groups.[12] Topographical access may also be an option: Which role(s) did the rural nobility and Berlin’s centrality play? Shouldn’t thinking critically about history also have to include making it clear that proposals related to identity building are, in fact, offers or mutable constructs? Shouldn’t the following questions be addressed: Where do we let Brandenburg’s history begin and end? Which contrasting interpretations of “Brandenburg” exist?

A museum can only be successful in promoting self-determined identity if it helps to develop critical construction of the meaning of history. This target is one of the basic principles of the HBPG and its policy for the new concept. Now the political decision makers should commit themselves to this task and not only concentrate on marketing a much too trite “Brandenburg” brand name. We can, thus, be very curious about what they will decide on: brand and/or identity.

____________________
[1] The HPBG is not a museum in the literal sense because it is not based on an incremental collection. The limited choice of artefacts and objects represents a further problem (e.g., the concentration in Berlin) that will not be dealt with in this blog, for reasons of space.
[2] Cf. also: Haus der Brandenburgisch-Preußischen Geschichte (2007): Tätigkeitsbericht 2006, Potsdam, http://www.hbpg.de/media/7459_9113_Jahresbericht2006.pdf, p. 3f. (last accessed: 31.1.2016). Ultimately, it was an intentionally political decision to establish the HPBG as the only state-funded institution in Potsdam. The Kulturland Brandenburg, a state-supported association, has been trying for more than 20 years to strengthen interest in local history. The Museum Society of the state of Brandenburg, an alliance operating under private law, supports regional museum activities in Brandenburg.
[3] Cf. also: Hahn, Peter-Michael: Geschichte Brandenburgs, München 2009; here p. 121.
[4] Cf. Göse, Frank: Brandenburg: Geschichtlicher Überblick, in: Staatskanzlei des Landes Brandenburg u.a. (Eds.): Brandenburg, Heidelberg [2007], p. 6-43, here p. 38.
[5] Only exception: the archaeological state museum in Brandenburg/Havel.
[6] At the time, thoughts about maybe realising a separate Preußen museum, in addition to the HBPG, were certainly also involved.
[7] At the opening of the HBPG in 2006, the then Minister for Culture, Prof. Johanna Wanka, also admitted: “Of course we also want to advertise for ourselves: for the city, for the region, and for the state of Brandenburg.” Haus der Brandenburgisch-Preußischen Geschichte (2007): Tätigkeitsbericht 2006, Potsdam, http://www.hbpg.de/media/7459_9113_Jahresbericht2006.pdf, S. 4 (last accessed: 31.1.2016).
[8] Numbers of visitors: gains thanks to “Friederisiko”. In: Potsdamer Neueste Nachrichten from 2.2.2013, http://www.pnn.de/potsdam/720192/ (last accessed: 31.1.2016).
[9] Based on the home page of the planned Museum for Bavarian History in Regensburg, it can be concluded that the history of the Free State will be presented as a “success story”. Cf. https://www.hdbg.eu/museum/web/content-001_das-konzept.html (last accessed: 31.1.2016). Identity building will be accelerated through appeals to the population to present their own mementos and to participate in the exhibition.
[10] Cf. Pohl, Karl Heinrich: Der kritische Museumsführer. Neun historische Museen im Fokus, Schwalbach/Ts. 2013, p. 111-134. Pohl analyses success stories as well as distinct attempts to focus on disruptions.
[11] Here the opinion that tangible structural-political interests were at the forefront of integration efforts (parallels to the present not excluded). Cf. Asche, Matthias: Neusiedler im verheerten Land. Kriegsfolgenbewältigung, Migrationssteuerung und Konfessionspolitik im Zeichen des Landeswiederaufbaus. Die Mark Brandenburg nach den Kriegen des 17. Jahrhunderts, Münster 2006, bes. S. 629.
[12] Cf. Hahn, Geschichte (see Footnote 3), p. 10.

« Good or bad remembrance? No Stolpersteine in Munich
A Museum for Every School! »