Good or bad remembrance? No Stolpersteine in Munich 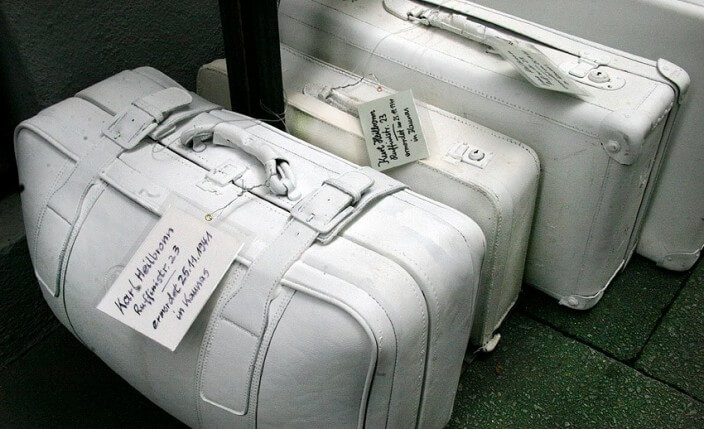 Abstract: No “Stolpersteine”? It has become a societal and political consensus to commemorate the Holocaust and the victims of the NS regime. However, the appropriate format is highly debated. This is also the case in the debate about the Stolpersteine project in Munich. Nonetheless, there is a multifaceted remembrance culture in the capital of Bavaria.
DOI: dx.doi.org/10.1515/phw-2016-5650.
Languages: English, Deutsch


No “Stolpersteine”? It has become a societal and political consensus to commemorate the Holocaust and the victims of the NS regime. However, the appropriate format is highly debated.[1] This is also the case in the debate about the Stolpersteine project in Munich. Nonetheless, there is a multifaceted remembrance culture in the capital of Bavaria.

There will be white suitcases in front of several houses in Munich’s Maxvorstadt. They are installed in public as part of an art project (hier wohnte…), in order to commemorate the Jewish citizens who lived in this district of the capital of Bavaria and were deprived of their rights as well of their goods, who were deported and murdered. About a thousand Jewish men, women, and children were transported to Kaunas in November 1941 and were executed there.[2] In other districts of Munich, remembrance activities with interactive installations have already been developed by an artist, Wolfram P. Kastner, who has much experience with this kind of public art. Citizens are encouraged to contribute suitcases, which are painted in white, made weather-resistant with synthetic resin, and filled with heavy material. The last address of the Jewish citizens, the place and date of death are printed on name labels attached to the suitcases. [3] Now, at the very latest, some readers might be puzzled by the striking similarity to the project called Stolpersteine [stumbling stones], only that, here, the stones are replaced by suitcases…

But: Stolpersteine are not allowed to be laid on public ground in Munich.[4] Gunter Demnig’s art project, with its concept of miniature memorials as paving stones with gleaming brass surfaces, with inscriptions, such as the date of birth and the person’s fate, has become a famous brand. In many cities, even beyond Germany, Stolpersteine are a natural part of the cityscape. Before their installation, all the benefits and drawbacks of these miniature memorials had to be considered: Is it a commemoration dignified if people mindlessly walk on the names of the victims? On the other hand, do many people actually stop (stumble) and pause for a moment? Do they ponder about the meaning of it, whom it is dedicated to, and which individual, personal fate is concealed behind the name? Are those many initiatives that have evolved from this project and are occurring in many places, not a good argument to approve these decentralized, miniature memorials?[5]

From the outset, the issue was a crucial one in Munich. The discussion already started to escalate in 2004.[6] The proponents and opponents of the project where not squeamish in their choice of words and argumentation, which had a lasting effect on the discussion atmosphere. The critics, who included Jewish citizens and property owners, as well as Munich’s art commission, were strictly against laying the paving stones for the Stolpersteine project. Charlotte Knobloch, the president of the Israelitische Kultusgemeinde München und Oberbayern, expressed herself quite vehemently.

For her, it would be unbearable if people were to trample on the names of the victims of the Nazi regime. After all, was it not the National Socialists who used their boots to humiliate and hurt? [7] Despite widespread sympathy in many parts of Munich’s population, the proponents of the Stolpersteine project, amongst them the Liberale Jüdische Gemeinde Beth Shalom, could not prevail. On 16 June 2004, the Munich city council decided, with an overwhelming majority, to prohibit the laying of Stolpersteine. As an immediate effect, two brass plaques that had already been laid, in keeping with the wishes of the relatives of the victims, were removed from the pavement.[8]

About a decade later, because the project’s proponents did not tire to demand permission for laying these miniature memorials in Munich, the city’s Administration concerned itself again with the topic, with broad public participation. On 29 July 2015, the city council reconfirmed its refusal. It was decided that Munich would not condone further installations of the miniature Stolpersteine memorials.[9] The more than 80’000 signatures of the petition “Removal of the prohibition of Stolpersteine in Munich” did not alter this decision. Currently, there is a plan to install memorial plates or columns at the former houses of the NS victims.[10] Additionally, a central memorial with the names of all NS victims will be erected according to plans that are to be submitted by a jury. It was announced that the main reason for the rejection of Stolpersteine by the city council was the definite rejection by the Israelitische Kultusgemeinde in Munich.[11] Some of the people who wanted to install the Stolpersteine have, in the meantime, started to challenge the decision and are trying to enforce their demands through legal interventions.[12]

This proves, once more, that the “social system” of historical culture is a sensitive construct that is influenced by a variety of aspects.[13] Individual factors, such as the participating actors, may become quite powerful. The debate about the Stolpersteine memorial project demonstrates how the day-to-day political dimensions of historical culture overarches the cognitive and aesthetical dimensions.[14] Other cities, large and small, have proven that these memorial paving stones are easily accepted. It is hard to understand why the project cannot be realized in Munich. On the other hand, is it really that grave, or even scandalous, if a city decides, by democratic means, to choose different forms of commemoration? A more sober debate would be a precondition for a consensus here.

Different forms of remembrance in Munich

Munich had been hesitant and also quite late in reappraising history in the post-war era and to guarantee an appropriate form of commemoration. However, the efforts to do so have been increasing recently. The local diversity of commemoration and remembrance has been growing into a varied field in which projects develop in diverse and stunning formats: The most prominent example out of many was the opening of the NS-Dokumentationszentrum on 1 May 2015 at the place of the building that was formerly called ‘Braunes Haus’ [brown house]. Other examples are Michaela Meliàn’s Memory Loops project [15] or the documentation of Leerstellen der Erinnerung [empty spots of commemoration] in Munich and its surroundings, as developed by students at the LMU.[16] Last, but not least, there are the white suitcases from the hier wohnte project, which are an eye-catching contribution to such vivid forms of remembrance. [17] After all, it is also in Munich that one can stumble in order to commemorate, but not only with regard to the Stolpersteine.

__________________
[1] Cf. Harald Welzer: Für eine Modernisierung der Erinnerungs- und Gedenkkultur. In: Gedenkstättenrundbrief 162 (8/2011), p. 3-9. Online: http://www.gedenkstaettenforum.de/nc/gedenkstaetten-rundbrief/rundbrief/news/fuer_eine_modernisierung_der_erinnerungs_und_gedenkkultur/ (last accessed 03.01.16).
[2] Cf. the documentary: “…verzogen, unbekannt wohin” on the first deportation of Jews in November 1941. Edited by Stadtarchiv München. München 2000.
[3] Cf. the project webpage on the realization of the project in Neuhausen: http://www.weissekoffer.de/ (last accessed 03.01.16). In Maxvorstadt, the project will be realized again with Ingrid Reuther.
[4] There are numerous Stolpersteine on private property in the public space; cf. the website of the initiative ´Stolpersteine for München e.V.` on Munich´s efforts to permit Stolpersteine in general: http://www.Stolpersteine-muenchen.de/Stolpersteine/verlegt.php (last accessed 03.01.16).
[5] Ultimately, a large number of school classes have contributed to projects to enable the laying of the individual paving stones of the Stolpersteine project. Young people have become active protagonists within historical culture. But it is also necessary to reflect on the role of the initiator, Gunter Demnig: which role does the economic aspect of the Stolpersteine project play? Is he not sufficiently ready to compromise, when it comes to inscriptions and the critical examination by experts? Compare Nike Thurn, Stolpersteine (cf. bibliography p. 358f.) regarding the controversial discussions at the beginning of the project.
[6] The “Süddeutsche Zeitung”, a daily newspaper, proved to be a most precise chronicler; it never tired of publishing a vast number of articles on the topic of Stolpersteine. In its Letters to the Editor section, it provided a forum in which a wide range of opinions could be expressed. A reflection of the discussion is available here: http://www.sueddeutsche.de/muenchen/ihr-forum-Stolpersteine-ehrung-im-strassenschmutz-oder-angemessene-form-des-gedenkens-1.2254819 (last accessed 03.01.16).
[7] Cf. Nike Thurn, Stolpersteine (Cf. bibliography), p. 358.
[8] Cf. Nike Thurn (ibid.) However, in Dachau and Freising , there are installations of the Stolpersteine project. Here, the local authorities pushed the realization through, even though Charlotte Knobloch is the President of the Israeli Cultural Community which also includes the district of Upper Bavaria. Cf. Bernhard Schoßig: Lernen und Gedenken. Orte der Zeitgeschichte, in: Norbert Göttler (Eds.): Oberbayern. Vielfalt zwischen Donau und Alpen. Jenseits des Klischees. München 2014, pp. 122-129; here: p. 127.
[9] The city council debated the issue in an objective atmosphere, following the hearing in December 2014 that was quite heated and controversial. During that hearing, two (of the many) proponents presented their arguments in favor of the project: Terry Swartzberg, a representative of the Initiative Stolpersteine für München e.V., and Ernst Grube, a survivor of the Holocaust. The mayor, Dieter Reiter, read out a letter written by Charlotte Knobloch, in which she again affirmed her rejection of the project. For details on the circumstances, cf. the coverage at: http://www.sueddeutsche.de/muenchen/gedenken-an-opfer-des-holocausts-muenchen-streitet-ueber-Stolpersteine-1.2254630 (last accessed 03.01.16).
[10] The recent success of the Stolpersteine project in national and international contexts was not convincing; the compromise proposal of Munich´s cultural advisor was also not successful (the equal acceptance of commemorative plaques, columns, and Stolpersteine; laying of Stolpersteine only if the relatives of the victims expressly wanted this). Meanwhile, the number of proponents of the petition has increased to 100 000.
[11] Cf. http://www.sueddeutsche.de/muenchen/gedenken-an-ns-opfer-stadtrat-lehnt-Stolpersteine-ab-1.2586927 (last accessed 03.01.16).
[12] Cf. http://www.sueddeutsche.de/muenchen/gedenken-an-nazi-opfer-ich-will-dass-die-muenchner-ueber-den-namen-meiner-grossmutter-stolpern-1.2754776. (last accessed 03.01.16).
[13] For a summary of the development of his thoughts on historical culture as a “social system”, see Bernd Schönemann: Geschichtsdidaktik, Geschichtskultur, Geschichtswissenschaft. In: Hilke Günther-Arndt/Meik Zülsdorf-Kersting (Eds.): Geschichtsdidaktik. Praxishandbuch für die Sekundarstufe I und II, 6., überarbeitete Aufl., Berlin 2014, pp. 11-23, here: 18ff.
[14] Cf. Jörn Rüsen: Was ist Geschichtskultur?. Überlegungen zu einer neuen Art, über Geschichte nachzudenken. In: Jörn Rüsen/Theo Grütter/Klaus Füßmann (Eds.): Historische Faszination. Geschichtskultur heute. Köln u.a. 1994, S. 3-26.
[15] http://www.memoryloops.net (last accessed 03.01.16).
[16] http://www.muenchner-leerstellen.de/ (last accessed 03.01.16).
[17] Charlotte Knobloch was also a proponent of the “hier wohnte…” project in Munich´s Neuhausen district: http://www.weissekoffer.de/unterstuetzer/charlotte-knobloch/ (last accessed 03.01.16).

Many thanks for support with the translation

« A History/Memory Matrix for History Education
Identity or Brand for the HPBG? “Preussen sells” »