The Gargantuan and the Diminutive – War at the Museum 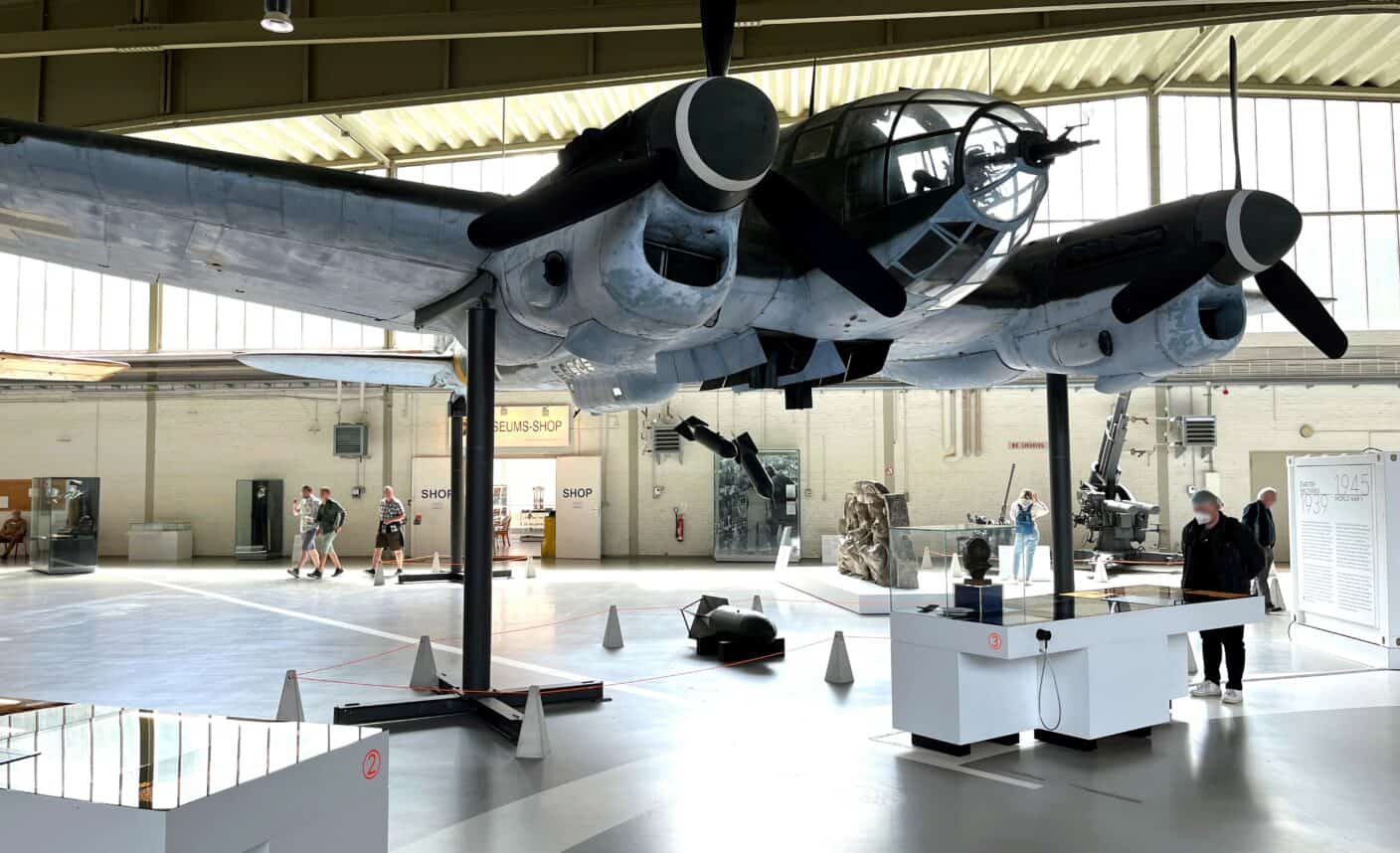 Abstract: Military history museums endeavour to be a space where the conditio humana as it relates to war can be discussed. However, their topics are contentious, they are prone to being (mis)used to foster nationalism and militarism, and they feature objects and representational forms that are inherently problematic: large exhibits and dioramas. This article will provide insights into the difficult relationship of the gargantuan and the diminutive in war exhibitions and their perception by visitors.
DOI: dx.doi.org/10.1515/phw-2022-20329
Languages: English

The gargantuan and the diminutive are often encountered in war exhibitions, where they pose a dilemma. Visitors are confronted with towering, awe-inspiring machines of war. At the same time, diminutive elements such as scale models and dioramas[1] are employed to visualise ideas and concepts that would otherwise be difficult to imagine. Both extremes attract and engage visitors but can also glorify and tame war. What role does scale play in war exhibitions? How do visitors perceive these displays?

The Scale of War

Military history museums have become more inclusive and self-critical in the past decade.[2] They endeavour to be a space where the conditio humana, as it relates to war, can be dissected. However, this is not true in all instances. In particular, museums in autocratic systems are prone to be (mis)used to disseminate propaganda and to justify acts of war.[3] To complicate matters the oft-encountered machinery of war and dioramas are themselves inherently problematic.[4] The relationship between the gargantuan and the diminutive in combination with such ‘difficult history’ is the focus of this short article, as it is a unique feature of military history museums.

The formidable and imposing quality of tanks, battleships and fighter planes cannot easily be softened. They can act as reverential objects that focus visitor perception on their technological and design characteristics. This is most pronounced in exhibitions on the First or Second World War.[5] In sharp contrast, miniaturised or life-sized dioramas feature thousands of figurines to illustrate troop movements and geography. Life-sized mannequins embedded in naturalistic environs are supposed to provide vivid and attractive narrative set-pieces for visitors. These displays of craftsmanship remain attractive to visitors due to their aesthetic qualities and vividness, yet they tend to tame war.[6]

The remaining objects – uniforms, documents, small arms, mementos etc. – are framed by these two extremes that refer to a fundamental characteristic of war: it is unimaginable, at least to the visitor that has not experienced war first-hand. Its scale is overwhelming, the numbers involved – both material and human – are hard to grasp. Its execution is chaotic, sources and witnesses unreliable. Death, suffering, trauma cannot be fully represented in a museum setting, only alluded to.[7] Accordingly, displaying large exhibits and scale representations is an attempt to bring visitors within reach of understanding war, while simplifying its complexity at the same time.

As Stephan Jaeger rightly points out, historical exhibitions cannot reproduce historical experiences or environments – instead, they can only simulate historical realities.[8] That being the case, it is impossible for them to create a truthful depiction of whatever they seek to represent. Instead, they actively create something new, a simulation of reality. Thus, representation becomes a practice of constructing meaning and reality.[9]

The crux of the matter is that visitors usually assume that exhibitions are based on academic research. They are perceived as a reliable source of ‘truthful’ information. However, museums cannot disseminate ‘truths’. At best, they offer balanced narratives that are based on verifiable facts; at worst, they serve as propagandistic outlets that actively attempt to shape public opinion for nefarious purposes.

Are various interpretations and contradictory narratives juxtaposed in the simulation or is the narrative deliberately restricted to a single master narrative? Are visitor expectations exploited to propagate an agenda or counterfactual content? Both questions point to the politics of display: museums are influenced by the intentions and ideas of their creators, government officials, visitors, activists, etc.[10] If modern military history museums endeavour to be a space were warfare in all its facets can be proactively discussed, they must reveal the simulatory nature of their exhibitions, juxtapose various narratives, and critically assess how the represented realities are constituted. The goal would therefore be a ‘school of critical thinking’.

In acknowledging exhibitions as simulations, the inherent challenge of dioramas is revealed: they are handicraft that attempt to represent a historical event without the necessity to refer to real events or objects – after all they are constructed by model makers as they see fit. The diorama can be an expression of a hyperreality that has no reference point in verifiable facts.[11]

It then follows that dioramas could emphasise the simulation character of an exhibition and invite reflection. However, in many cases the exact opposite takes place: curators employ dioramas to authenticate exhibition contents. On a metacommunicative level, dioramas suggest omniscience. Every detail is – apparently – meticulously reconstructed and furnished with authority by the museum setting. In addition, only one version of a historical event is usually presented. The decision-making process behind this selection is not apparent and an opportunity to engage critically is not provided. Consequently, the polyphony of reality is disguised by the static nature of dioramas.

As Mélanie Boucher notes, it is this ‘disingenuous neutrality’ of dioramatic forms of representation that critics take offence with.[12] Nevertheless, the museum diorama does not intend to deceive, instead it offers an archetypal world or, as Ralph Rugoff aptly puts it: “a compelling substitute for the real world”.[13]

Burke’s classical reflections on the ‘sublime’ and the ‘ugly’ provide some pointers for the relationship of diminutive and gargantuan displays in museums. As Burke elaborates:

“A great beautiful thing is a manner of expression scarcely ever used; but that of a great ugly thing is very common. There is a wide difference between admiration and love. The sublime, which is the cause of the former, always dwells on great objects, and terrible; the latter on small ones, and pleasing; we submit to what we admire, but we love what submits to us; in one case we are forced, in the other we are flattered, into compliance.”[14]

This leads us to the question: if, initially, visitors experience the sublime when they are confronted with a large exhibit, does this then colour their perception and lead to admiration of the machinery of war? According to Preußer, this sensation is caused by being at first overwhelmed by the size or threat potential of an object, or the sheer number of exhibits (e.g. a series of tanks or a room-filling diorama with thousands of figurines) and then distancing oneself from largeness and quantity, regaining control of one’s senses and the illusion of control over the situation.[15]

In effect, viewers derive positive pleasure from overcoming the ‘threat’, which in turn leads to experiencing the sublime. However, this can give viewers the faulty impression that war can be controlled or that it is amenable to reason. It is up to the museum to either exploit this tendency or to contextualise large exhibits to counteract it.

Both diminutive displays and large exhibits pose challenges to museum professionals: one due to its ‘disingenuous neutrality’ the other due to its tendency to lead to admiration and awe. Both go against the desire to offer balanced reflective spaces. However, looking at visitor responses, a more nuanced – if preliminary – picture of how these representational forms are perceived is revealed. Based on exploratory qualitative semi-structured interviews and focus groups at the German Air Force Museum Berlin-Gatow (n=26), the German Tank Museum Munster (n=9) as well as the Tin Figure Museum Goslar (n=20), several tendencies can be identified.

Concerning dioramas, all visitors in the sample approached them initially as aesthetically pleasing displays of craftsmanship. Admiration was centred on the model builders who create the (miniature) worlds, not the scenes themselves. If contextual information was missing, visitors did tend to impose their own interpretations and narratives, leading to politicization or sometimes counterfactual interpretations. In many cases visitors recognise them as simulations or reconstructions and they have no reservations about the representation of difficult history. Forced labour, sexual violence, violence against civilians, being wounded and dying are considered inseparable from acts of war, accordingly their representation in dioramas is advocated for. Interviewees also drew parallels to the current events in the Ukraine, in particular the realization that war crimes against the civilian population are a basic characteristic of warfare throughout history.

Regarding large exhibits, visitors predominantly focused on technological or design aspects, prompted by a personal interest e.g. being a member of the armed forces, an engineering student or air war enthusiast. Only if contextual information was provided and absorbed was this initial impression modified. In the sample, individual biographies and scenographic interventions led to an appreciation of the destructive potential of the aircraft and the magnitude of civilian casualties at the air force museum.[16] It is noteworthy, if anecdotal, that members of the German military more readily acknowledged the destructive potential of the objects on display, due to being personally acquainted with their capabilities.

Dioramas that (super)impose an awareness of their simulatory character and allow visitors to recognise them for what they are – elaborate stage plays – may allow visitors to reflect on the nature of war. Their main strength is vividness and an ability to capture attention. It is, however, important to take visitors seriously and consider their ability to ‘do’ history, that is, work with the material provided to create their own explanations and connections.

Large exhibits must be contextualised and arranged in such a way as to modify the initial response of admiration and awe, scenographic interventions that disturb assumptions and raise awareness of their destructive potential are sensible ways of achieving this goal.