Fake News from the Past – Lessons For the Future 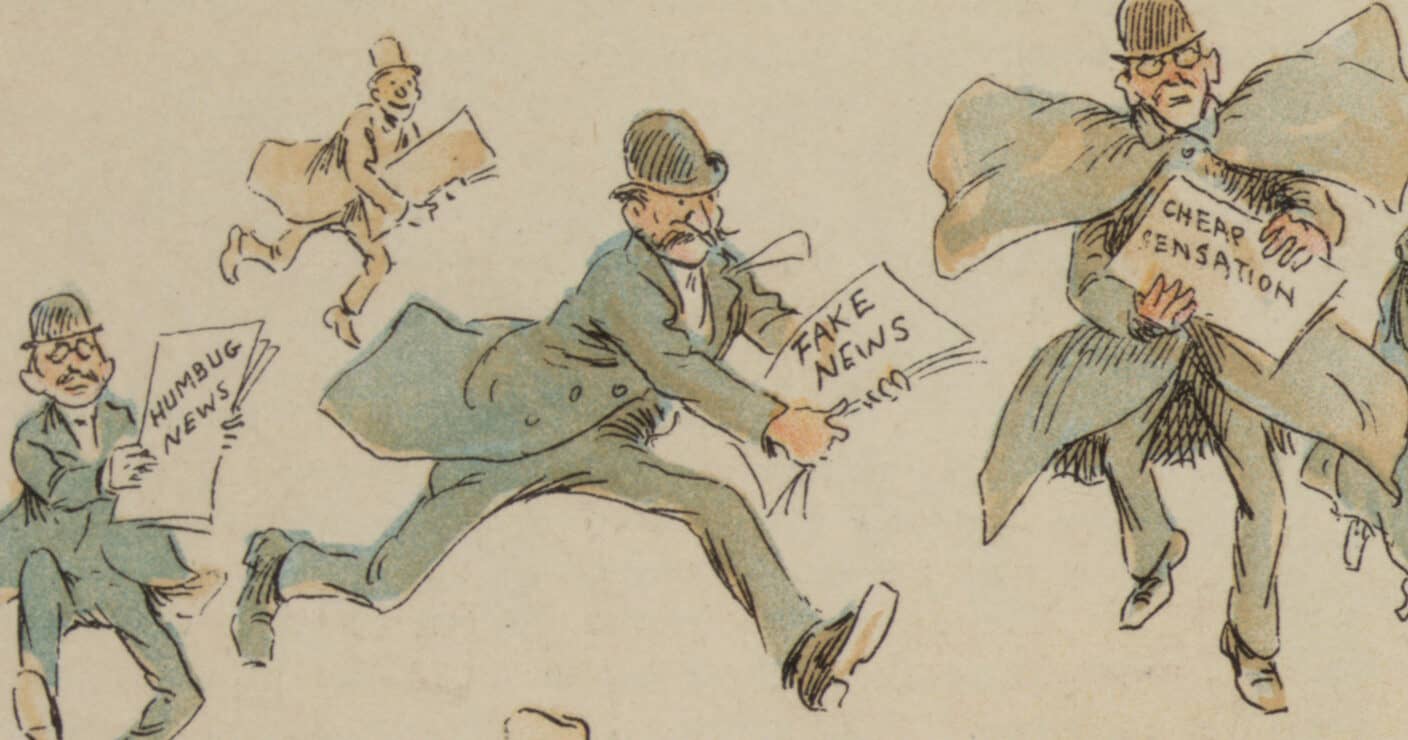 Abstract:
There is agreement amongst media commentators that the spread of so-called fake news poses a serious threat to democratic society, and as history educators, we have an obligation to help stem the rising tide of misinformation. Until now, not many have accepted the challenge, perhaps from a misconception of “fake news” as a modern, post-Internet phenomenon. But disinformation has been with us for millennia, and historical examples may provide the key to developing a critical sense among students.
DOI: dx.doi.org/10.1515/phw-2021-19199
Languages: English

During the catastrophic floods that swept across Germany in July 2021, the waters breached a hydroelectric dam on the river Wupper, putting thousands of lives at risk. In the video clip shared on Telegram, more than 30,000 users could see for themselves the water cascading over the edge and carving great gashes through the embankment. Except that it never happened. The river was not the Wupper and the video did not show a crumbling hydroelectric dam, but a flooded lignite quarry.[1]

Can fake news be stopped – and how?

Fake news, defined by the Cambridge English Dictionary as “false stories that appear to be news, spread on the internet or using other media, usually created to influence political views or as a joke” pose a challenge to modern open, democratic societies. Fake news may cause panic, it can determine the outcome of elections, it can cost lives. In January 2021, armed supporters of Donald Trump stormed the U.S. capitol in Washington. Five persons died during the fighting, which was fueled by claims that the presidential election had been “stolen”.  Many more lives will be lost among those who refuse to let themselves be vaccinated against Covid-19 from fear of being injected with a microchip.

The seemingly simple solution is to stop fake news at its source by removing fake information from websites and excluding users who use social media platforms to spread disinformation (a well-known example is then-US President Trump, who was permanently barred from Twitter). But if the aim is to protect democracy, then censorship is not the best way forward and in a globalized world, governments have no means to check the flow of misinformation across their borders.

Another approach is to tackle the problem at the receiving end. A fake news item spreads like wildfire because social media users believe it and pass it on to others. If internet users can learn to spot fake news, they will not pass it on, and it will eventually die out. Part of the solution is to improve students’ “media literacy” by teaching them to choose reliable websites, for instance government agencies and universities, in preference to sites sponsored by corporations, political parties or religious groups. But uncritical belief in government institutions is not good for democracy either and in any case, most recipients of fake news do not obtain their information directly from a website but indirectly from retweets on social media. Students must be empowered to judge for themselves and spot dubious arguments and spurious documentation when they encounter them.

Fake news is not always new

As history educators, we should be among the first to take up the challenge. After all, the judicious analysis and evaluation of sources is central to the historian’s craft. And not all fake news is “news” in the usual sense of the word, i.e. reports of recent or current events. That “Barack Obama is a Muslim” is a statement about the present, but “Barack Obama was born outside the United States” (which, if true would make him ineligible for the US presidency) is a statement about the past; it is fake history.

An early example of fake history is the Book of Daniel in the Old Testament, which tells the story of the Jewish prophet Daniel, astrologer to Babylon’s king Nebuchadnezzar in the sixth century BC. In the book, Daniel predicts the fall of the Persian empire, the advent of a hero-king (Alexander the Great) and many other events down to the Jewish rebellion in the 160s BC. For the rebels, it was encouraging to know that events of their own time had been foreseen by Daniel four centuries previously, clear proof that the decline of the Seleucid empire formed part of a divine plan and that God was on their side.

Strangely enough, the Book of Daniel is far less reliable when describing events of the prophet’s own time, the sixth century BC, and most Biblical researchers agree that the book as we now have it is a product of the second century. The author-compiler took some old stories about a sixth-century prophet named Daniel and added a series of “prophecies” about events which had already taken place at the time of writing.

Historical fakes abound. Many are crude forgeries and soon unmasked: the Protocols of the Elders of Zion, the “Hitler diaries” of Konrad Kujau or the Kensington runestone which supposedly documents a Scandinavian expedition to Minnesota in the 14th century.

The Historia Augusta, a collection of Roman biographies by six different authors, had a longer afterlife and was used as a source text by generations of historians. Even the nestor of German source criticism, Leopold von Ranke (1795-1886) was taken in and praised the source value of the History in his Weltgeschichte, published 1883. Six years later, another German, Hermann Dessau (1856-1931), demonstrated that the entire collection was the work of one author, not six, and completed at least half a century after its ostensible date.

In the twelfth century a Welsh monk, Geoffrey of Monmouth, composed a History of the kings of Britain. In the Preface, he explains that he did not write it himself but translated “a very ancient book in the British tongue” (i.e., Welsh) into Latin. No one apart from Geoffrey himself saw the book, and there is no reason to believe that it ever existed. Part of his History is a hotchpotch of material taken from other writers, other parts – such as the stories of King Arthur and his court magician Merlin – are clearly the product of Geoffrey’s own imagination. Though its veracity was questioned from an early date, Geoffrey’s work was still being read and quoted as late as the sixteenth century, and his stories about king Arthur live on to this day.

Creating the Historia Augusta, the Hitler diaries or Geoffrey’s History clearly involved a lot of work. Why did the forger go to such trouble; what were his (or her) motives? If we look at other classes of historical forgery – artworks, coins, archaeological artefacts – money and the desire for recognition are the two most obvious motives. Money was no doubt uppermost in the mind of Konrad Kujau, who received more than 2 million DM for his “Hitler” diaries. Other forgers, however, did not become as rich:  the owner of the Kensington runestone was offered five dollars for his “find”. As for recognition, the art forger may derive satisfaction from seeing his work accepted as a genuine Picasso or Rembrandt, but the text forger cannot achieve recognition without unmasking himself.

One thread running through many historical forgeries is an underlying sense of frustration. The forger and his circle find themselves in circumstances from which they are unable to escape. As a Welshman, Geoffrey was frustrated at the loss of Celtic Britain to Germanic invaders; as a pagan, the author-forger of the Historia Augusta was frustrated that Christianity was being imposed on the subjects of the Roman Empire. To Scandinavian-Americans, it seemed insufferable that an Italian should get all the credit for discovering America when Vikings had crossed the Atlantic five hundred years before Columbus. And some Americans found it so unbearable that Biden should be inaugurated as president when they believed, incorrectly, that Trump had won the election that they determined to set things right. While it is a truism that “history is written by the victors”, it is rewritten by the losers.

A third point in common is that forged historical narratives, like fake news, gain credence because readers want them to be true. The Jews wanted the fall of the Seleucid Empire to be part of God’s plan; the Welsh wanted a glorious Celtic past under king Arthur, just as the followers of Donald Trump wanted him to be the rightful president.

Lessons from the past

That a source text is forged does not mean that it is of no interest to historians. The Protocols of the Elders of Zion are an important source for nineteenth-century anti-Semitism and with care, it is possible to extract bits and pieces of authentic history from the tangled skein of fact and fiction in the Historia Augusta or the History of the Kings of Britain. Even more important in the present context is the didactic potential of historical forgeries in the history classroom. By studying a historical hoax, students can learn to analyse arguments and spot some of the typical techniques used by purveyors of misinformation.

For classroom use, the Kensington runestone offers a particularly good case study. Hjalmar Rued Holand (1872-1963), a Norwegian-American writer, devoted much of his life and several books to proving that the runic inscription was genuine and in Westward from Vinland (1940) he collected the arguments in its favour. In the book, Holand employs argumentative techniques familiar to observers of the fake news phenomenon, such as cherry-picking from the scientific literature, selectively amassing peripheral or circumstantial “evidence” that appears to support the theory of a Norse expedition while ignoring evidence against it and shifting the burden of proof on to his critics: “No valid evidence to show that the inscription is a forgery has been presented”.[2]

Holand also took the stone on a tour of European universities and museums. Most of the experts he consulted rejected it as a fake, but a few academics went against the majority view and declared it authentic – just as today’s news fakers will often find a maverick academic to support their claims that quinine (medication used to treat malaria) is effective against Covid-19, that 5G networks cause cancer, or that the moon landing of 1969 never took place. A small circle of loyalists continues to believe in the authenticity of the Kensington runestone, which even has its own museum.

Analysing a historical forgery as a classroom case, students will learn to see through dubious arguments, appreciate the value of scientific documentation and understand why some people continue to insist that a forgery is authentic. At the end of their quest, they will be better equipped to deal with the flood of fake news and misinformation flowing through their smartphones.