The Elements of Primary School History 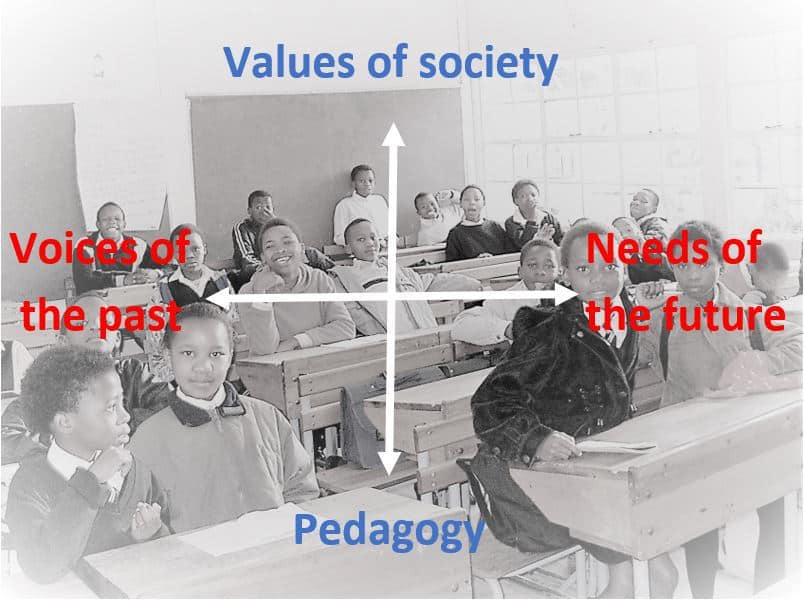 Abstract: A ten-year old once told me that the problem with history was that “I cannot go back a lot of years.” His personal experience of the remembered past was only five or six years — not much on which to base his understanding. This is one reason why it is so difficult to categorise history as a school subject in primary school years. The two intersecting axes in the accompanying diagram were developed in an attempt to create a way to describe primary history meaningfully.[1]
DOI: dx.doi.org/10.1515/phw-2018-12309.
Languages: English, Deutsch


A ten-year old once told me that the problem with history was that “I cannot go back a lot of years.” His personal experience of the remembered past was only five or six years — not much on which to base his understanding. This is one reason why it is so difficult to categorise history as a school subject in primary school years. The two intersecting axes in the accompanying diagram were developed in an attempt to create a way to describe primary history meaningfully.[1]

How does one provide an easily accessible description of history for the primary school that non-specialist teachers can understand and adopt? This diagrammatic solution was developed after discussion and workshopping with teachers in Cape Town.

The concept of the two axes is that all primary school history teaching should always involve both axes but that most lessons taught will be at different points of intersection. A lesson might have much to do with voices of the past and the methodology might be drawing pictures to illustrate them, or it might pose a contemporary problem that can only be considered by reference to the past together with the appreciation of appropriate responsibility towards others, for instance. Each of the axes is a means to link up what would otherwise remain disparate elements of history (as is often the case in history classes).

Voices of the Past — Needs of the Future

This axis acknowledges that while children are frequently intrigued by “voices” of the past (old things, people and events of long ago and their documents, pictures, videos, and music), they are predominantly forward-looking, given their age. Their future is more important than their past and history has to be approached with this in mind. There will be many occasions when they will appreciate the past for its own sake, but they will think nothing of changing instantly into future mode: “Did they like it then?” can immediately be followed by “What will it be like when I’m 20?”.

Teaching should be able to switch focus easily from the future to the past, and from the past to the future. Arranging pictures on a timeline to illustrate the development of transport has as much to do with understanding transport tomorrow as with understanding it long ago. Furthermore, Cape Town pupils who have knowledge of the frequent fires in informal settlements will not only comprehend a story such as that of the Great Fire of London in ways that others will not, but will also justifiably be very concerned about how to prevent such fires in the future.

Young children often need to be convinced about why to study the past. This axis provides some of the motivation. The emphasis on “doing history”, whether derived from the discipline of history[2] or simply from an activity approach[3] to working with children, informs the choice of methodologies for teachers. The key is to have a wide variety of teaching strategies available and to vary them often. In many instances they will complement the teaching of other subjects — languages, art, drama, geography.

Civic/democratic education is often tacked on to history curricula in the younger years, partly to create an extrinsic purpose for the subject and partly to involve the learners in useful activity that is related to the past but not focused on it. In the South African context, it is very clear that there needs to be an “activist” role for history in creating democratic citizens who espouse democratic values.

The way in which the methodologies are adapted is crucial to this. Playing a game based on the past for its own sake alone, for example, serves little purpose, but playing the game to espouse democratic values at the same time does achieve a purpose. Likewise, the ethical values of the school or country often come to the fore in the primary history classroom and the opportunities need to be embraced. What does, for instance, Mahatma Gandhi’s non-violent resistance, first expressed in South Africa, teach regarding behaviour towards other pupils?

The pendulum of primary education swings periodically between a child-centred pedagogy and one that is discipline-centred. Both have their place in the classroom. There is potentially too much to lose by neglecting one or the other. The child is located in both of the above axes. Its location is in or near to the centre. This is neither a child-centred nor a discipline-centred description, but it confirms that without consideration of the interests, abilities, and mentality of children, history in the primary school will never achieve all that it might. Without a place for the child at the centre of the description, there is no joy, no delight in history teaching and history learning.

John Fines once summed up the conclusion to a history lesson in which he had used drama to recreate a Pharaoh’s Court in ancient Egypt:

“Charles had been a real Pharaoh, the wife-stealer had stolen a wife, the peasant had shown the eternal peasant to the world, and a lot had been learned”[5]

much more, I assert, than would have been learned had the children not been at the centre of the lesson. What Kiernan Egan wrote forty years ago bears repetition:

“From the way some historians and teachers of history respond to what I have called romantic and philosophic interests in history, one would assume that children and students with such interests were committing intellectual crimes or sins, rather than being involved in a normal process of development.”[6]

The four points of the diagram encapsulate an approach to primary school history that allows both the “normal process of development” of children and the opportunity for authentic historical learning.[7]

« “History Types” and Public History
History Textbooks – what and whom are they for? »