Hindelang is not Hindu Kush. Military and Tradition 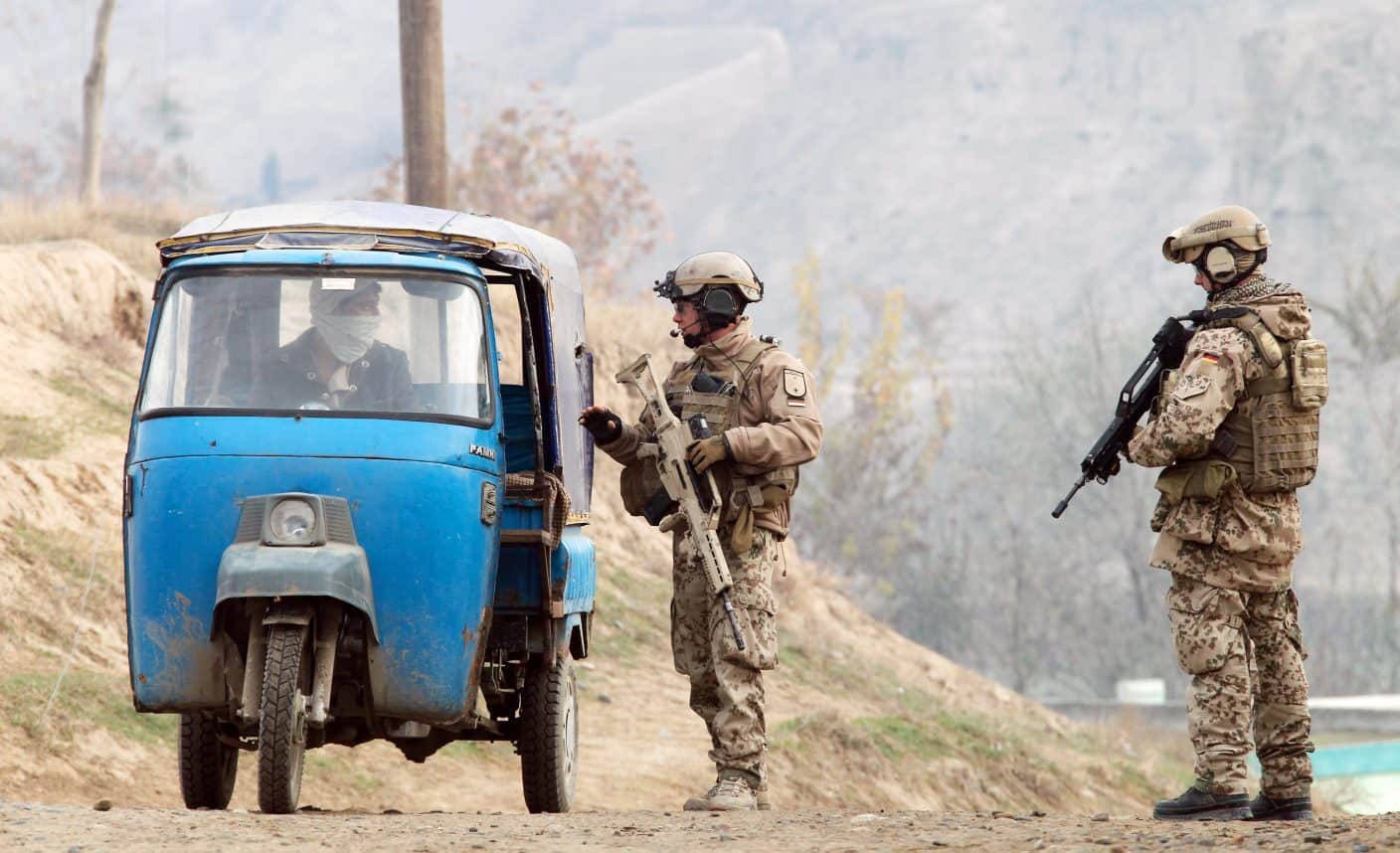 Abstract: Public History scandals have occurred repeatedly in the German Bundeswehr (German armed forces) in recent years. These scandals comprised young men belonging to this modern parliamentary army who actively draw on the traditions and symbols that were once used by the National Socialist Wehrmacht. This has prompted the German Ministry of Defence to consider a new “tradition legislature”. How does it come to such scandals and what is their context? This article problematises this issue by touching on some fundamental questions: Why do people put on a uniform, submit themselves to strict regulations, endure hard training and drill, and in the end are prepared to kill other people or risk the possibility of their own death—if they don’t have to?
DOI: dx.doi.org/10.1515/phw-2018-10910
Languages: English, Deutsch

Public History scandals have occurred repeatedly in the German Bundeswehr (German armed forces) in recent years. These scandals comprised young men belonging to this modern parliamentary army who actively draw on the traditions and symbols that were once used by the National Socialist Wehrmacht. This has prompted the German Ministry of Defence to consider a new “tradition legislature”. How does it come to such scandals and what is their context? This article problematises this issue by touching on some fundamental questions: Why do people put on a uniform, submit themselves to strict regulations, endure hard training and drill, and in the end are prepared to kill other people or risk the possibility of their own death—if they don’t have to?

Notwithstanding the admittedly Eurocentric nature of this sketch (please accept my apology for this), a retrospective look shows the change of motivations and reasons: In the ancient Greek polis it was an honour to be part of the phalanx as a hoplite and to enforce the interests of one’s own polis against those of the competition. The Roman legionnaire, who also had to be a citizen, hoped for a share of the plunder or a piece of land after his time of service. A fighter for the auxiliary troops did the same and (later) also hoped for his civil rights. In the European “Middle Ages” reciprocal self-interest forced the nobleman to serve in the military allegiance, the motive of survival forced the citizen onto the battlements, or the legal dependency forced the country dweller into the squad of the landlord.

This changed when cities first began delegating the realisation of interests and the provision of protection to professionals: the Condottieri. This professional body caused a furore in the Early Modern Age; the Swiss mercenaries (Reisläufer) were its best known experts. The risk was carried by individuals because the employment opportunities, unlike impoverishment in the local community were rated higher than the risk of injury or death. However, the loyalty within mercenary armies towards clients was limited.

As a result, modern armies were established first in the Netherlands, then in the modernising states of Early Modern Europe. They offered salaries, supplies, status (uniform) and opportunities for advancement, while at the same time regulating military violence – reason enough for many young men to enter such an army. Something like patriotism as a motive may already have become effective in the European Early Modern Age (e.g. in the context of the Orange Military Reform). In France, however, this factor was palpable after the fateful manifesto of the German Duke in 1792 and the Levée en masse of 1793. Belonging to a “nation” was now an obligation in an existential sense. The era of the modern national army with its conscripted military service declared the readiness for killing and being killed in uniforms as an achievement in collective identity. Later on, it extended to a “school of the nation” because it had moved far into the civilian sphere, and from there, to an initiation ritual of the modern (male) citizen as collective defence of one’s own. That is what “Hindelang” stands for.[1]

This motivation was working across different times and systems of modernity: in democratic and dictatorial forms of rule, in open and closed societies (Popper). In each of these conscription armies there existed different propaganda structures to secure the existential loyalty of the young men–who were recruited mostly by force–, provided they had not previously been obscured too much by various nostrocentric myths. In the Bundeswehr of the old and new Federal Republic of Germany everything must of course be evaluated differently… There it is called “Innere Führung” (“internal leadership”).

Modern Armies after the Unipolar Moment

The traditional modern system of motivating and securing the state-organised application and sustaining of violence, carried out and suffered in uniforms, had come to an end with the end of the Cold War. The unipolar moment.[2] No more enemy far and wide for the West. What was the use of having an army? The dividends of peace were being relished, military expenditure shrank, the number of soldiers was reduced. As a result, “military justice” came to be questioned, who was still to be drafted? The time of service was reduced, civil service was upgraded and became the dominant form of service. In the end, for young men there remained a period of several months of service for the common good (insofar as they were in the civil service). But what to do with the remaining army? The army that was meant to defend the “fatherland” was gradually deployed to what is termed somewhat obscurely “out of area”. This meant that the deployment included areas outside of the German national territory, and even outside the NATO alliance territories.

In the 1990s and 2000s the change was fully accomplished: Volker Rühe’s Somalia mission in 1993[3], Joseph Fischer’s Auschwitz comparison in 1999[4], Peter Struck’s Hindu Kush topos of 2002[5]–the new enemy was “international terrorism”, and it had to be defeated on-site, which meant on many locations of this earth.[6] As such, the role of world-policing was assumed, which, up until then, had been carried out by old and new imperial powers of the USA, the UK, France and the Soviet Union / Russia – without, however, communicating this openly. A German Federal President, who once took the liberty to do so, was criticised very harshly for doing so and consequently resigned from his office.[7]

It was Mr. Guttenberg, the Minister of Defence, who, in 2010, in the second cabinet of Angela Merkel, parallel to the affair with President Köhler, enforced the de facto abolition (“suspension”) of compulsory military and and civil service in Germany.[8] Since then, a voluntary military service has been established. But the question remains, as it has been since the beginning of civilisation: Why should a young man, or (since 2001 in all areas) a young woman decide to commit to such a service? To fight the Taliban in Afghanistan? To control unruly tribes in Mali who are armed with weapons acquired from the overthrow of the Libyan government? To chase pirates near Somalia? It is unlikely that the old principles of the parliamentary army and internal leadership are made for these tasks. Or more precisely, they were never created for it.

The motivation for writing this article is the Bundeswehr scandals in recent years, in many of which Bundeswehr members explicitly drew on the traditions, symbols and persons associated with the National Socialist Wehrmacht.[9] I don’t think that this accumulation of incidents in recent years is a coincidence, but that they can be explained by referring to the context outlined: Existential risks and limitations become acceptable if, a) the collective interest is regarded more highly (patriotism), or if b) the balance between risk and profit still seems favourable (as in the Early Modern Period). Whoever does not want to make the latter prominent because s/he can not give up the idea of ​​defending Hindelang–automatically directs the reasoning to factor a). But whoever has nothing convincing to offer here, will accept that the old patterns of collective interests once again become a fixed point of orientation in time. For example, a British soldier draws on the military tradition of his country as an Empire, in which it is normal to fight “out of area”. What is the connection for a German soldier?  A reference to the nasty German imperial traditions is close at hand then.

Incidentally, it is fitting that the Bundeswehr recently acts like a normal employer and attracts new potential recruits at trade expos, at career exhibitions at school and universities, or in filmed commercials. It would be very interesting to see what kind of young men and women are attracted to this dangerous task and these restrictions to personal freedom.[10] An alternative solution seems to be outsourcing to the private sector.[11]

For me, the question remains open: Why and with what motivation should a German citizen in a uniform make use of his or her weapon at the Hindu Kush or off the coast of Lebanon? What could be motivating him or her, other than money, adventure, prestige? Why should the government invest such tax money, if not to pursue tangible interests? It seems important and urgent for me to get clarity on this, so that the wrong search for patriotic reasons and historical traditions does not keep ending up in embarrassing scandals. You cannot pretend, without a cost, that you still have the old national territorial army of the Cold War, and at the same time use the military infrastructure for worldwide deployment. These are imperial uses – integrated into the Western Alliance. President Köhler was right when, in 2005, he was honest and put national “interests”[12] at the centre of this debate. The 2010 interview[13] only made it clearer. This debate needs to continue.

Historically, and according to the pattern of the national territorial army, there is no longer making any loyalty here. The solution could lie in realising the European perspective. Nevertheless, imperial historical reminiscences would be fatal here too. Consistent would be a combination of a negative foundation of tradition (cf. Knigge)[14] and the open articulation of interests.

“Von der Leyen orders distance to the Wehrmacht and the NVA”[15], if it were possible par ordre du mufti!

And what about Hindelang?