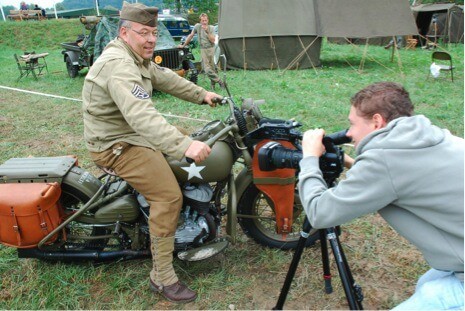 Abstract: Reenactment – namely the restaging of historical events in the most authentic way possible[1] – fascinates people! Organizers regularly announce record-breaking numbers of visitors. Reenactment groups that would like to take part in a certain event often have to be turned away: the program is already booked out or the “play area” is too small. Where does the attractiveness of such events come from? Do warlike stagings, in particular, entice visitors? And does this still have anything to do with history at all?
DOI: dx.doi.org/10.1515/phw-2016-6873.
Languages: English, Deutsch


Reenactment – namely the restaging of historical events in the most authentic way possible[1] – fascinates people! Organizers regularly announce record-breaking numbers of visitors. Reenactment groups that would like to take part in a certain event often have to be turned away: the program is already booked out or the “play area” is too small. Where does the attractiveness of such events come from? Do warlike stagings, in particular, entice visitors? And does this still have anything to do with history at all?

“Of course, this is history”, many reenactment organizers and groups claim. Adrian Gerwer, the president of the organizing committee of the “Convoy to Remember”[2] event that, according to a media text, has developed from a mini to a mega event in the last 20 years, points out: “With this military old-timer meeting, we want to remind people of the fact that, on 6 June 1944, liberation from the scourge of National Socialism began with the landing of troops in Normandy”.[3] And thus – according to the organizers’ announcement on their website – for the first time ever in Switzerland, “a US airfield in warlike live operation” is on show. “An original 1944 Stinson L-5 takes off and lands again on the festival grounds. In parallel, a camp of the US army air corps for military pilots has been reconstructed in its original size – a highlight!”[4]

The reenactor groups that have assigned places on the festival grounds are named “Big Red One Living History Organization”,[5] Fox Co, 2nd Battalion, 502nd PIR, 101st Airborne[6] or Klondikes.[7] On their website, the Klondikes write,

“Military reenactment is a kind of ‘interactive history teaching’ for the participants as well as for the audience. But contrary to history textbooks or movies, reenactment tries to offer first-hand experiences (…). If you, in fact, ever wanted to know how soldiers experienced the Second World War, then come along and watch the restaging of these historical events or living history on the topic.”[8]

Military reenactment as an amusement?

Exactly what effect such restaging of living history has was reported by the Brugger Gazette, following an event that took place in 2013:

“There was pure merriment, here and there even joyful exuberance (…). There was waving and laughing, there were military greetings in a dead serious, correct, martial, brisk way. As different as people are, so differently do they act out the Convoy – to the amusement of the spectators!”[9]

The laughter, however, seems to have got stuck in the throats of some reenactors and spectators: “Napoleon”, for example, reported in the “Forum for Living History”: “The DLI will quite certainly not take part in a Convoy anymore because, when it comes to drunk people in uniform threatening other actors with weapons, then we have to stop.”[10] And “Cantarella” replies, “I fully endorse this. I don’t want to even start talking about a spectator (in plain clothes, not in uniform) who greeted me by saying ‘Heil Hitler.’”[11]

Oh! Is reenactment of acts of war then dangerous fun? Do such events about the Second World War invite the audience to openly express their Fascist ideology? Is war transfigured and even glorified? Does reenactment give a totally distorted picture of past events? And do reenactment events open doors to indoctrination and overpowering, instead of providing “interactive history teaching”?[12]

History for entertainment – what about education?

A glance at the framework program of “Convoy to remember” reveals that military reenactment is part of its extensive entertainment program. Thus, the Patrouille Suisse flies overhead, thereby doubtlessly providing a great air show, but this has as little to do with the landing in Normandy, as does the ‘Oktoberfest’ music band, “Münchner Zwietracht”, which performs as the main act in the festival tent in the evening.

This fact does not really come as a surprise. History has always served, and still, also today, serves the purpose of entertainment. Thus, the new Swiss German Curriculum 21 even states, “The students can make use of history for education and entertainment.”[13] This formulation is actually good. Entertainment only is not enough; also not within the context of reenactment. It does not pose a problem if people simply amuse themselves with history during a reenactment show, a school history lesson, or a historical movie. It first becomes a problem when attitudes – for instance, political or religious ones – are subtly transferred and conveyed that people adopt without reflecting much on them.[14] This form of entertainment based on history also becomes a problem at the moment when the view of the present and the future is thereby permanently distorted. Therefore, critical thinking is crucial when dealing with history. Critical thinking ensures education. Students can learn to think critically if they are taught well. Such critical thinking is promoted, thanks to free media, in open societies. Critical thinking liberates people from the captivity of their present and opens up their view of the future and the past. They thus become curious about history.

Can this be done with military reenactment? Do the reenactors and spectators really ask themselves how people lived in France at the time when the allies landed in Normandy? What exactly did the soldiers experience while landing? How did the advance right across Europe take place? What war crimes occurred in the environment of the Convoy?
These are facts that many of them simply do not want to know. “We do not have the least interest in war, but we are really interested in the technology, the joy, the exchange among colleagues worldwide”, Pius Länzlinger, participant in the Convoy to Remember 2016, explains to Swiss Television.[15] To hold old objects from the past in one’s hands, or to watch reenactments, does not automatically contribute to either becoming curious about history or to acquiring a better understanding of history.

This might occur more successfully during experimental role-playing with cultural techniques or when experiencing everyday life situations from other times, rather than during military reenactments.[16] And one might also better succeed in this if reenactors simply stage history for themselves, without any audience. Good reenactment groups, however, succeed in making their audience ask questions about demanding military issues as well, be it by explicitly inviting them to bring up questions, be it by reenacting well-chosen scenes several times and in different ways and, by this, irritating and provoking the spectators. Either way, reenactment could have great potential to increase the curiosity of the participants and, thus, create one of the most important preconditions for historical learning and for education. It is simply a pity that this opportunity is often wasted.

_____________________
[1] See on “Reenactment” e.g. Reenacting History: Braun, Micha; Heeg, Günther; Krüger, Lars; Schäfer, Helmut (Eds.): Reenacting History: Theater & Geschichte. Berlin: Theater der Zeit, 2014. See also the Wikipedia contributions on the same keyword “Reenactment“ in different languages. It, for example, seems interesting to me that in the English-language contribution already in the first sentence the attention is drawn to the educational and entertaining aspect of reenactment: “Historical reenactment (or re-enactment) is an educational or entertainment activity in which people follow a plan to recreate aspects of a historical event or period.“ (https://en.wikipedia.org/wiki/Historical_reenactment; last accessed 6 August 2016)
[2] On the website of the Association you find the program of the event as well as, for example, the goals and, of course, a series of photos and media reports about the event: http://www.convoytoremember.com/23-0-Home.html (accessed 6  August 2016).
[3] Quoted from: General-Anzeiger; The regional paper for the district of Brugg and adjoining municipalities; No 33 of 15 August 2013; p. 1; online at http://www.convoytoremember.com/files/rundschaunord_kw_31.pdf (accessed 6 August 2016).
[4] http://www.convoytoremember.com/23-0-Home.html (last accessed 6.8.2016). Due to this self-advertising many question should, of course, be asked: Can one and is one allowed to re-experience a situation in which soldiers permanently had to face death on festival grounds at all? And what exactly is it that one is reminded of in connection with this “Convoy”? Also of the fact that the Germans treated the civilian population with ruthless severity immediately after the invasion and in Oradour-sur-Glane e.g. massacred 640 villagers? Or does it remind of the fact that the liberated French people shot dead and lynched thousands of collaborators?
[5] http://www.big-red-one.org/ (last accessed 6 August 2016).
[6] http://fox502nd.weebly.com/ (last accessed 6 August 2016).
[7] http://www.klondikes.nl/reenactment/ (last accessed 6 August 2016).
[8] Ibid.
[9] Like footnote 3, p. 14.
[10] http://lebendige-geschichte.ch/viewtopic.php?f=3&t=5916, posted on 12 August 2013 at 06:56 (last accessed 6.8.2016).
[11] Ibid., posted on 12 August 2013 at at 07.32 (last accessed 6 August 2016).
[12] Like footnote 7.
[13] Curriculum 21, Subject area: Spaces, Times and Societies (with geography and history), competence 7.2; online at http://v-ef.lehrplan.ch/index.php?code=b|6|4&la=yes (last accessed 6 August 2016).
[14] Attitudes are thus adopted by means of “communicative persuasion” on a peripheral way. Cf. also e.g.: Gautschi, Peter (2008): Der Beitrag des Geschichtsunterrichts zur Entwicklung von Einstellungen. In: Bauer, Jan-Patrick; Meyer-Hamme, Johannes; Körber, Andreas (Eds.): Geschichtslernen – Innovationen und Reflexionen. Geschichtsdidaktik im Spannungsfeld von theoretischen Zuspitzungen, empirischen Erkundungen, normativen Überlegungen und pragmatischen Wendungen – Festschrift für Bodo von Borries zum 65. Geburtstag. Kenzingen: Centaurus (Reihe Geschichte; 54), p. 289 – 306. Here p. 291.
[15] Contribution “Military Oldtimer Meeting in Aargau” in the main edition of the news program of Swiss Television of 13 August 2016, online at http://www.srf.ch/play/tv/tagesschau/video/militaer-oldtimer-treffen-im-aargau?id=11f4958e-3f58-4119-a887-4cc46054b564 (last accessed 14.8.2016).
[16] Also here there are, of course, good and less good examples: What nonsense when students craft the imperial insignia of the Holy Roman Empire. Cf. also Pandel, Hans-Jürgen (1999): Postmoderne Beliebigkeit? In: Geschichte in Wissenschaft und Unterricht, Vol. 50 (1999), p. 282–291. Here all that is offered in the Roman adventure park in Windisch seems to be much better to me. Cf. also https://www.ag.ch/de/bks/kultur/museen_schloesser/legionaerspfad/ legionaerspfad.jsp (last accessed 6 August 2016).

« History in an Age of “Truth and Reconciliation”
The Lure of Public History: Intimate and Public »