Black or White? Reconciliation on Australia’s Colonial Past 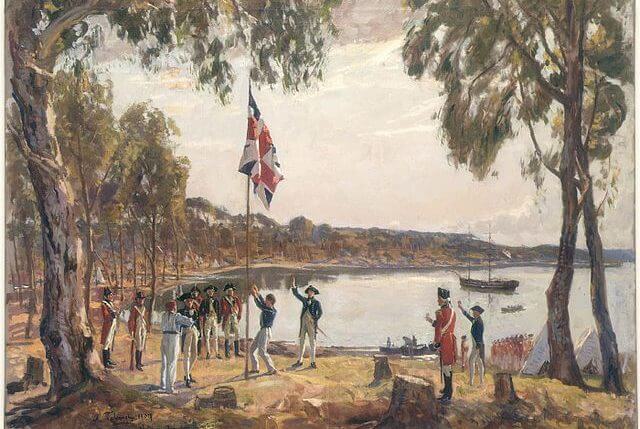 Abstract: Reconciliation? The conservative commentators are at it again. On March 30 this year, The Daily Telegraph attempted to reignite Australia’s “History Wars”.[1] The object of conservative concern was a guide produced by the University of New South Wales that clarified appropriate language use for discussing the history, society, naming, culture, and classifications of Indigenous Australians and Torres Strait Islanders. The newspaper headline, misrepresenting the text of the guide, claimed, “UNSW rewrites the history books to state Cook ‘invaded’ Australia”.
DOI: http://dx.doi.org/10.1515/phw-2016-6055.
Languages: English, Deutsch

Reconciliation? The conservative commentators are at it again. On March 30 this year, The Daily Telegraph attempted to reignite Australia’s “History Wars”.[1] The object of conservative concern was a guide produced by the University of New South Wales that clarified appropriate language use for discussing the history, society, naming, culture, and classifications of Indigenous Australians and Torres Strait Islanders. The newspaper headline, misrepresenting the text of the guide, claimed, “UNSW rewrites the history books to state Cook ‘invaded’ Australia”.[2]

The Struggle for Public Memory

The guide states that “invasion” is a more appropriate term to describe Australia’s past than “settlement”, which was the received and taught history right up until the late 1980s, the period within which many of the most vocal conservative commentators went to school. However, of Captain Cook it simply states that it is more appropriate to say that he “was the first Englishman to map the east coast of ‘New Holland’” than to say he “’discovered’ Australia”[3]. It does make a particular point that the term “discovery” can be offensive. Judging by the airplay given to this issue in the broadcast media, the term “invasion” offends a completely different segment of society. Representations of Australia’s colonial past have been the enduring problem of the history wars.

Perspectives from Both Sides of the Frontier

Historian Henry Reynolds’ groundbreaking The Other Side of the Frontier: Aboriginal Resistance to the European Invasion of Australia (1982)[4] provided one of the first accounts of early European-Indigenous contact from an Aboriginal viewpoint, challenging the received history of a nonviolent frontier. Public awareness of a distinct Aboriginal perspective on Australian history intensified as a result of a series of grassroots protests that culminated in a day of mourning during the bicentennial celebrations of 1988. For many Australians, the call for a day of mourning by Indigenous elders at the time of the bicentennial, televised around the country, was an important catalyst for reflection on the nation’s past, bringing into relief the disjuncture between the official story of peaceful European settlement and Indigenous stories of dispossession, occupation, and oppression.

The High Court’s ruling in the Mabo and Wik land rights cases that followed ensured that the question of an untold Aboriginal history remained in the national psyche. The syllabus documents, released shortly after the bicentennial, registered, for the first time, this perspective from the other side of the frontier, subsequently fuelling a decade-long political struggle over the national narrative. Arguably, the formation of a national History curriculum was a thinly veiled (and largely unsuccessful) attempt by politicians to secure a single story for the nation[5].

Whose Story Do Our Students Tell?

In a recent Australian study[6], pre-service history teachers [n=97] were asked to write for 45 minutes in response to the request to “Tell the history of Australia in your own words”, borrowing a research methodology developed by Canadian Professor Jocelyn Létourneau (2006)[7]. A focus on the colonial past and the poor treatment of Indigenous peoples dominated the narratives. The doctrine of “Terra Nullius”[8], the concept of “invasion”, and a representation of Aboriginal peoples as “inferior” in the eyes of the “White Settlers” were common themes in the stories our future history teachers told. Less than 10% of the narratives discussed Aboriginal resistance to British colonisation, suggesting that, although there was a sense of shame for the dispossession of Indigenous peoples, there was also evidence that the discourse of Aboriginal people as inferior (in this case incapable of successful resistance) had made its mark. Thus, it is clear that the “Black Armband” view of the colonial past is the dominant narrative mobilised by pre-service history teachers, and that texts like the UNSW guide, and state History syllabi since the early 1990s, have had their effect.

How the Left and the Right both get “History” Wrong

I have very little doubt that the early waves of British colonisation were experienced by Australia’s Indigenous peoples as a type of invasion, and that this word serves as an adequate description of their lived experience of colonisation. I have a lot less confidence that this is how the British understood their activities in the Great Southern Land, which seemed to have more to do with securing outposts against other European imperialist powers.

As a historian and history educator, I follow Collingwood[9] here: I believe it is our job to understand not only the “outside” of a historical event (i.e., what happened), but also its “inside” (i.e., why people acted the way they did). If we want to reconcile with our nation’s past, both its traumas and achievements, then we need to face up to the evidence of what happened (avoiding amnesia), and attempt to understand the motivations of people in the past by stepping into their shoes (attempting historical empathy), while being cautious about any intellectual or emotional baggage we are bringing from the present into our interpretations and constructions of the past (remaining cautious of anachronism).

To have historical consciousness is not so much to know the past, as it is to know the prejudices I am bringing to the table in my attempt to understand the past[10]. To do this effectively, I have to understand that history is not the infallible reconstruction of a completely knowable past, but a set of constructed and competing narratives resulting from the application of different historiographic methodologies, different historical questions, etc. If the post-colonial moment is realising that there is more than one narrative of the nation, what is the job of the post-colonial history educator? Surely it is to help students understand that, just as it is possible to have a road map, a weather map, and a topographical map of the same area, it is also possible to respect different narratives of the same past.