Rhodes must fall! Anatomy of a Protest 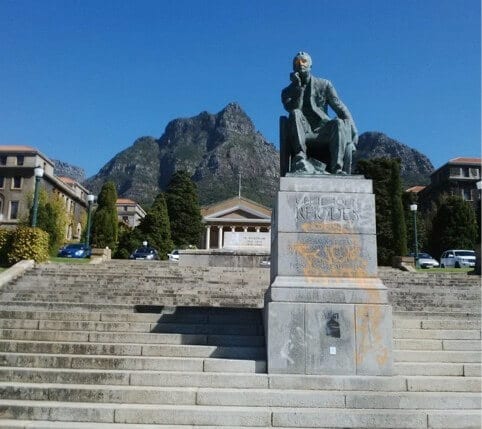 Abstract: The recent protests about the statue of Rhodes at the University of Cape Town (UCT) have resulted in much debate and media coverage. They also present an opportunity to analyse elements of public history and its role.
DOI: dx.doi.org/10.1515/phw-2015-4134.
Languages: English, Deutsch


The recent protests about the statue of Rhodes at the University of Cape Town (UCT) have resulted in much debate and media coverage. They also present an opportunity to analyse elements of public history and its role.

The Rise and Fall of Rhodes Memoralization

Since 1934, students making their way up the many granite stairs that lead to the main campus of the University of Cape Town, where I work, have passed by the imposing statue of Cecil John Rhodes (modelled on Rodin’s The Thinker), which looks out over a wide vista of the eastern side of Cape Town and False Bay. Most, probably, have not given it a second glance and have simply accepted it as part of the landscape of the oldest university in South Africa. It was presented to the university by the “Rhodes Memorial Committee” to commemorate the role of Rhodes (1853-1902) in extending the British Empire northward from South Africa and also as a mark of the fact that Rhodes had bequeathed the land on which the campus is built as the site for a national university. (The university has its origins in the South African College, founded in 1829. It was formally established as a university in 1918 and it moved to this campus in 1928.)
Students no longer pass the bronze statue. It was boarded up on 29 March and removed with much media focus on 8 April. The events which led to this began on 9 March, when a student protest gathered at the statute. During the action, human waste was thrown on to the statue, as a “poo protest” (copying a similar strategy which was used a number of times in 2014 to draw attention to the need for better sanitation in informal settlements in parts of the city). Protesters called for the removal of colonialism from the university and for the much more rapid transformation of the institution. This was followed by a meeting of over 2,000 students on 12 March at which speakers asked for the statue to be removed and announced the intention of the Students’ Representative Council to hold discussions on the challenges of transformation and how to make the university less Eurocentric, expressing justified indignation about the continued existence of symbols of apartheid.

Stages of the Protest

Analysing these events from the vantage point of public history may throw light both on what occurred and on the nature and limitations of public history. The immediate circumstances of 9 March appear to have little relevance to public history itself. The statue was the rallying point for a protest which then sought to publicise its aims. As Chumani Maxwele, who threw the poo, explained, “It is not just a statue, as many claim – Rhodes didn’t want black people. Remember that, at some point, UCT also didn’t want black people.”[1]
It is interesting that very little media attention was paid to the protest for a couple of days. When it came, however, it moved very quickly into the realm of public history. The voices of the public on radio stations and websites and in letters to newspapers were divided between supporters and opponents of Rhodes: his place in history was analysed, the evil he had done weighed against the lasting good (Rhodes scholarships in particular), and questions asked about the government’s policy on colonial statues and “what would Mandela have done?” The reaction from the university authorities also spoke to the role of public history. It wanted debates opened, the opportunity for everyone to have their say, meetings for every different category of student, staff member and level of university governance. Boards were put up for written comments (and removed when it was deemed that some comments were racist).

As the voice of the government of the land was so muted,[2] a space was opened for intellectual leadership in the debates that issued forth in the country, the city, and the university. It was dominated, however, not by those who might have been considered public historians,[3] but rather by political commentators, media columnists,[4] human rights activists [5], and academics[6] who urged the need for and the way to transformation of the university. The South African Heritage Resources Authority (which had the authorisation to grant permission for the removal of the statue), museum and heritage site directors, local and academic historians were for the most part silent onlookers.[7]
The third phase of the protest, now known as the Rhodes Must Fall (RMF) movement,[8] was marked by gatherings at the university’s administration building (which students re-named Azania House) and the occupation of the building until after the removal of the statute. Debates about Rhodes and his role in history were rapidly replaced by a general consensus that the statute must be removed from the campus. The university brought forward its date for making a final decision about the statue and hastened to give assurances about future transformation. The space for public history was, thus, closed down. It may be re-opened in future, however, in a subsequent phase when decisions are made about the relocation of other colonial era statues.[9]

The first phase showed the importance of the site of confrontation. Previous “poo protests” had been at the Western Cape government building and the Cape Town International airport. This time the site was provided by public history, which proved a remarkably effective means to fire the protest. The second phase demonstrated some very robust exchanges in meetings and in the media, which had the interpretation of the past at their centre. It also showed how easily the recognised agents of public history were disempowered by the protest narratives and how relatively quickly the debates moved beyond them. The third phase set aside public history, apart from its drama in the visuals of the removal of the statue, but also opened the possibility of a fourth phase of broader deliberation.

________________________
[1] Quoted in “Student spring is long overdue.” City Press, 29 March 2015.
[2] An exception was the Minister of Arts and Culture, two weeks after the protest began: Nathi Mthethwa, “Use protest over Rhodes statue to rediscover, reconnect with our heritage.” Cape Times, 27 March 2015.
[3] Some of the few contributions of this kind were by Rebecca Hodes, Centre for Social Science Research, University of Cape Town, “The rising voices of young dissent,” Cape Times 14 March 2015, Wandile Goosen Kasibe, Public Programmes Co-ordinator of the Iziko South African Museum, “No middle ground on genocidal Rhodes,” Cape Times 17 March 2015, and visiting research fellow from the University of Utrecht, Anne Marieke van der Wal-Rémy, “Removing painful memories doesn’t ‘democratise’ heritage,” Cape Times, 27 March 2015.
[4] For example, Jonathan Jansen, “Poo protest unfit for a King”, The Times 19 March 2015; “Unravel history, don’t erase it.” The Times, 26 March 2015: Stephen Grootes, “Say it aloud – Rhodes must fall” Daily Maverick, 6 April 2015 http://www.dailymaverick.co.za/article/2015-04-06-op-ed-say-it-aloud-rhodes-must-fall/#.VT_dkZNPLuc (last accessed 30.05.2015).
[5] For example, Albie Sachs, “Getting the last laugh.” City Press, 29 March 2015.
[6] The only two historians widely quoted were Paul Maylam on person of Rhodes and Howard Phillips on the history of the statue. Other academics contributing to the debate were, for example, educationist, Beverley Thraver, “Statue is but tip of transformation iceberg awaiting discussion,” Cape Times 20 March 2015; sociologist Xolela Mangcu, “Danger of a rationalist conceit,” Cape Times, 25 March 2015 and “The response of UCT student to a society still drenched in racism is an early warning of racial war – which we would do well to heed,” City Press, 29 March 2015; poet and author, Adam Small, “Crossing the bridge to understanding,” Cape Times, 2 April; and Neo Lekgotla laga Ramoupi of the Council on Higher Education, “Lessons from the Rhodes statue’s fall,” Mail and Guardian, April 17 to 23 2015.
[7] The South African Heritage Resources Agency is quoted as saying that the public has to be consulted, as late as 4 April in the Weekend Argus.
[8] “We’ll take Rhodes fight to other varsities.” Weekend Argus, 21 March 2015.
[9] See, for example, “Where statues go to rest.” City Press, 29 March 2015.

« Iconoclasm Backwards. A Lost Memorial Site
How We Talk About Our History »