100 Years of the “Christmas Truce”. Longing for a New Narrative 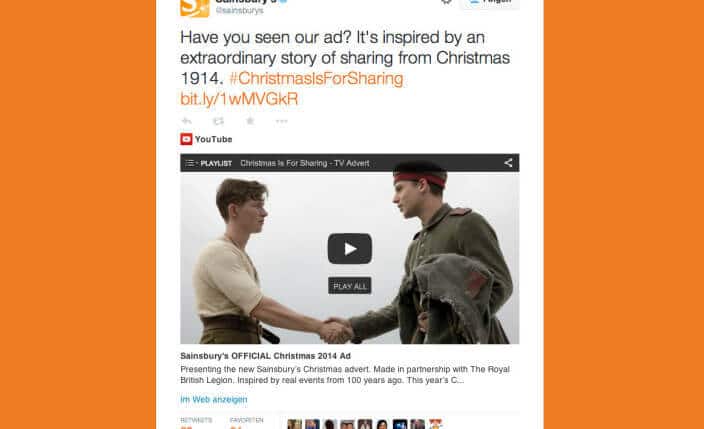 Abstract: Not all is quiet on the Western Front: The annual unofficial competition for the best Christmas advert in the United Kingdom was decided as long ago as 12 November. Sainsbury’s, the British supermarket chain, stunned its competitors and the public with an extremely professional film about the “Christmas Truce” on the Western Front in 1914.
DOI: dx.doi.org/10.1515/phw-2014-3151.
Languages: English, Deutsch

Not all is quiet on the Western Front: The annual unofficial competition for the best Christmas advert in the United Kingdom was decided as long ago as 12 November. Sainsbury’s, the British supermarket chain, stunned its competitors and the public with an extremely professional film about the “Christmas Truce” on the Western Front in 1914.[1]

Its slogan: “Christmas is for sharing.” The ongoing discussion about whether advertising should be allowed to use war for its own purposes overlooks something rather important: the current search for a transnational narrative about World War One.
Duration: 3 minutes 20 seconds. High-quality. Almost real. First scene: trenches on the Western Front. Snowflakes. Insert: “Christmas Eve 1914.” A young British soldier is looking at a cookie, his meal for Christmas Eve, surrounded by the noise of artillery fire and detonating grenades. Mail from home arrives, containing the picture of a young woman, a letter, and a bar of chocolate. Suddenly the noise of war stops. Blowing across no man’s land the Brits can hear the Germans singing “Silent night, Holy night.” Cut. Long shot to the snow-clad no man’s land. Cut. German trench with singing soldiers. Cut. British trench. Soldiers singing “Silent night.” Cut. Cut. Cut. German and British soldiers are singing louder and louder. Together: “Silent night, Holy night.” Cut. – This is the beginning of the current Christmas advert of the British supermarket chain Sainsbury’s. It then shows British and German soldiers climbing out of their trenches, meeting in no man’s land, exchanging small goods, taking photographs and, of course, playing soccer. Peace ends suddenly when artillery fire resumes. The war is back. Telling this story, the film refers back to a historic event known in the United Kingdom as “Christmas Truce” and “Weihnachtsfrieden” in Germany.

True, Sainsbury’s Christmas advert plays on emotion. Yet the same holds true for John Lewis, another British department store, and also for the German supermarket chain Edeka.[2] Nevertheless, the public debate on this film is highly controversial. Journalist Ally Fogg writes in the Guardian: “Sainsbury’s Christmas ad is a dangerous and disrespectful masterpiece. In making the First World War beautiful to flog groceries the film-makers have disrespected the millions who suffered in the trenches.”[3] Sainsbury’s is criticized for doing nothing but exploiting an emotional event of the First World War solely for profit. The supermarket chain counted on the fact that public attention was guaranteed on the 100th anniversary. Therefore, the advertisement was disrespectful against the soldiers who lost their lives. Contrary to the John Lewis Christmas advert, with its soft toy penguin that, of course, is offered for sale in the department stores, Sainsbury’s sells the chocolate from Jim’s parcel— produced in Ypern (!), a town in Flanders—for only £1. In addition, the money will be given to The Royal British Legion, the British welfare organization for war veterans—quite a clever way of avoiding critical remarks in the first place!

As accurate as possible…

The Royal British Legion considers the commercial to be absolutely unproblematic; there is no mention whatsoever of disrespectfulness. Quite on the contrary, the Legion is full of praise: “[…] the advert is a creative interpretation of the moment when on Christmas Day 1914, British and German Soldiers paused […]. Emphasis is placed on how close the advert is to the real historical event: “Sainsbury’s and The Royal British Legion have sought to make the portrayal of the truce as accurate as possible, basing it on original reports and letters, as well as working with historians throughout the development and production process.”[4] This can also be seen in two accompanying short films, a making-of and a short documentary.[5] Indeed, the Sainsbury commercial is based on events documented in historical sources dating from 1914, albeit in an extremely abbreviated version: The carol-singing, the “Barber Shop” in no man’s land, the soccer match, the snapshots, playing cards, and the bartering – but whereas these events all actually occurred in 1914, they did not take place at one single location.[6] The TV commercial does not show the historical event (something it cannot show), but rather how it can be told in the UK in 2014.

While using the film for advertising purposes is debated in the press, the story itself is uncontroversial. Forgotten in Germany until ten years ago, the “Christmas Truces” are common knowledge in the United Kingdom, part of the basic narratives about the First World War. Ample evidence exists in the shape of academic publications, children’s books, movies, songs, and caricatures.[7] Using the “Christmas Truces” in the context of the current remembrance hype about World War One is quite obvious and far from unique. In view of “Poppy Pizza” or the steel helmets of Belgian chocolate, the film is not the most irritating product invented by the remembrance industry in 2014.[8] In fact, the television advert follows a (narrative) tradition that has developed since the first press releases on the “Christmas Truces” in 1915. Moreover, the film draws on former visualisations of the event, such as Paul McCartney’s music video for “Pipes of Peace” (1983), or the film “Merry Christmas” (2005). Thus, neither the story, nor its narration, is the noise coming from the Western Front.

Something elementary, however, is being overlooked: The Sainsbury commercial also reflects the numerous attempts to overcome traditional, and specifically national, ways of commemorating the First World War or at least to add transnational elements to such commemorations in 2014, the year of remembrance.[9] New memorials testify to the same gesture. On 6 December, politicians inaugurated a memorial created by British and German students dedicated to the “Christmas Truces” and on 11 December a corresponding UEFA memorial was unveiled.[10] The “Christmas Truces” almost immediately spring to mind as a place of remembrance in 2014 since they offer a coalescing Europe a remembrance narrative that enables all participants to remember the First World War and the soldiers in the trenches and—like in December 1914—to join hands with peaceful intentions on the former battlefields. While remembering the “Christmas Truces” this year says much about the fraternisation of 1914, present-day commemoration says even more about us and our longing for reconciling narratives.