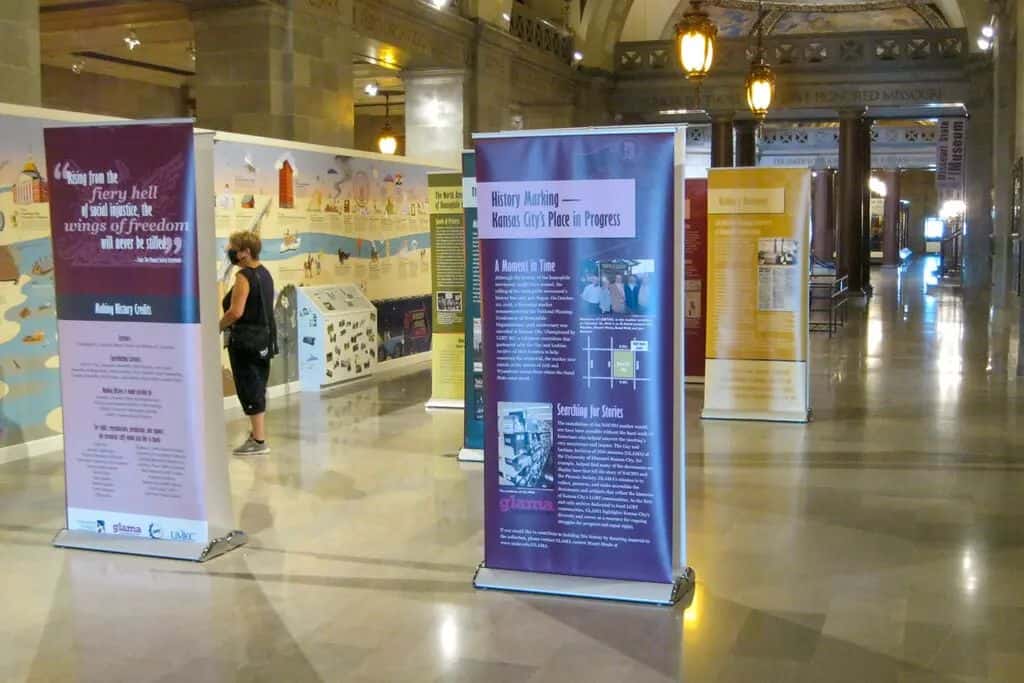 Abstract:
This article recounts the experience of two curators whose exhibit on Kansas City’s LGBTQ+ history was removed from the Missouri State Museum by the governor. Though the exhibit was a federally-funded work of scholarship, the governor caved to pressure from conservative lawmakers to remove the project because of its content. The authors detail their experience as the exhibit’s curators, and reflect on whether the increased attention the exhibit received outweighs the sting of censorship.
DOI: dx.doi.org/10.1515/phw-2022-20581
Languages: English


When a statewide controversy over our traveling exhibit on early gay rights activism in Missouri drew national and international attention, it was tempting to focus on the silver lining: more attention to this little-known history than otherwise would have been received. But what do we miss if we spend too much time focusing on the upside?

At the start of September 2021, an exhibit that we co-curated, Making History: Kansas City and the Rise of Gay Rights, was removed from the Missouri State Capitol.[1] We had only recently learned that Making History—a pop-up traveling exhibit made of twelve stand-alone panels—was in the Capitol building at the Missouri State Museum. It had been traveling non-stop since the summer of 2017, with staff from the Gay and Lesbian Archive of Mid-America (GLAMA) overseeing the exhibit’s installations. Where the exhibit actually was installed sometimes escaped us. But we were thrilled to learn that the Missouri State Museum would host the exhibit as part of its celebration of the state’s two-hundredth anniversary. It was supposed to be up for nearly four months. It lasted all of four days.

Making History is about Kansas City’s surprisingly central role in the history of the early gay rights movement in the United States. Its twelve banners tell the story about how delegates from what were then called “homophile organizations” took advantage of Kansas City’s geographic centrality to meet there in 1966 in what became America’s first national gathering of gay rights organizations. Out of this meeting came the North American Conference of Homophile Organizations, which turned a multitude of local associations into a truly national movement.

The exhibit featured photographs of specific activists, publications from its affiliate members, and newspaper articles that together highlighted how a handful of local activists in Kansas City ended up contributing to an organizational infrastructure that allowed for the rise of more radical gay liberation groups after the 1969 Stonewall Inn uprising.

The exhibit was first drafted by students in Christopher D. Cantwell’s “Intro to Public History” class at the University of Missouri-Kansas City, and was eventually fashioned in partnership with GLAMA and Freedom’s Frontier National Heritage Area. Its travel was intended to amplify the work of Kansas City activists who had commemorated the famed 1966 meeting with the installation of a historical marker at the spot where the groups had met.[2]

In the years since the exhibit’s fabrication in 2017, it has toured local libraries, LGBTQ+ community centers, universities, and museums throughout western Missouri and eastern Kansas. While we anticipated some pushback, we received almost none. The exhibit’s hosts reported that their communities were thrilled to learn about the contributions their hometown made to a larger story, and in some places the exhibit’s presence allowed institutions to offer an expanded calendar of programming on LGBTQ+ issues.

It wasn’t until the exhibit arrived at the Missouri capitol building in the fall of 2021 that the pushback began. Within days of its installation, a Republican legislative aide named Uriah Stark posted on social media about how the Missouri State Museum was “pushing the LGBT agenda.” The accusation was, of course, erroneous, for the exhibit is a work of scholarship that recounts the history of an important meeting that would shape our national history.

The Storm of Attention

According to local reporting, the aide’s complaint found sympathy among several Republican state representatives and senators, who then pressured Republican Gov. Mike Parsons to remove the exhibit.[3] The governor then instructed the head of Missouri’s Department of Natural Resources, who oversees the Missouri State Museum, to remove the exhibit. The move quickly drew local,[4] national,[5] and international[6] media attention, which eventually forced the governor to reinstall the exhibit in a less visible, less accessible, and therefore secondary location.

But the storm of attention brought a silver lining. In the days after the exhibit was removed, its digital version had thousands of site visits, thanks to the many articles, Facebook posts, and tweets that linked to it. We received a handful of kind comments through the site’s contact form. To our pleasant surprise, we have received no hate mail (although Sen. Razer was not so fortunate).[11] There have been multiple invitations to host the exhibit elsewhere, and a St. Louis radio host funded the production of a second copy of the exhibit that is now traveling throughout eastern Missouri and southern Illinois.

This is all gratifying. Far more people have seen the exhibit online thanks to the controversy than ever would have seen it on display in the Capitol. It’s nice to know that more Missourians have had the chance to learn about this part of Missouri’s history. But even as we and the exhibit’s supporters celebrated the upside of these events, the platitudes felt hollow. Because the trouble with silver linings is that they too easily redirect our attention from the lingering storm cloud.

Five thousand site visits does not erase the message that some Missouri legislators have sent: that LGBTQ+ history—and, it feels implied, LGBTQ+ Missourians themselves—have no place in the state capitol. It does not take away the pain of state staffers who posted on social media, remarking that these same legislators smiled and waved at them in the halls without knowing that the staffers were out and hurt by these actions. We fear for the LGBTQ+ youth whose state representatives led this charge, who might be struggling to feel like they belong in Missouri at all.

The Struggle for Social Justice

We are angry for the UMKC students and alumni who had to watch weeks of silence from UMKC leaders[12] who have failed to voice their support for this exhibit—an exhibit they had no trouble celebrating with a press release[13] when it won a national award. Current LGBTQ+ UMKC students had to watch that same silence and now wonder if the University would come to their defense if called upon. We worry that funding agencies like the Freedom’s Frontier National Heritage Area will see a public controversy like this one—even after years of the exhibit’s successful travel—and will hesitate to fund similar exhibits in the future. And it is discouraging that many of the things we wrote about in the exhibit as history—fear of reprisal for being publicly out, fearmongering about imagined threats to children, discrimination against LGBTQ+ citizens by government—are all playing out in front of us again.

The trouble with silver linings is that they are too comforting. Too many times people have nodded with satisfaction after they hear about the surge in the online exhibit’s numbers or its continued travel. But this lets us all off the hook far too easily. The problem is not how many people have or have not seen the exhibit. It is about the fact that a small, angry, cruel minority could so easily silence so many others in the state. And it is playing out in far too many contexts today as school boards ban Black history books, and state legislatures, including Missouri, seek to ban the teaching of the existence of systemic racism.

Shortly after the exhibit’s release, we, the project’s primary curators, authored an article on how public historians can serve as allies in contemporary struggles for social justice.[14] We still think this is true. But after our experience with the Missouri state legislature, we are coming to think that just being an ally is not enough. We have to be activists in the struggle for social justice as well, not only in exhibit halls but on the streets and in voting booths as well. Because as our experience makes clear, even public historians can be censored or oppressed just for doing their jobs. Like the people and the communities we study, we have to find ways to make history as well.

Making History in the Missouri State Museum, where it stood for four days. Image Courtesy of the Gay and Lesbian Archive of Mid America (GLAMA).