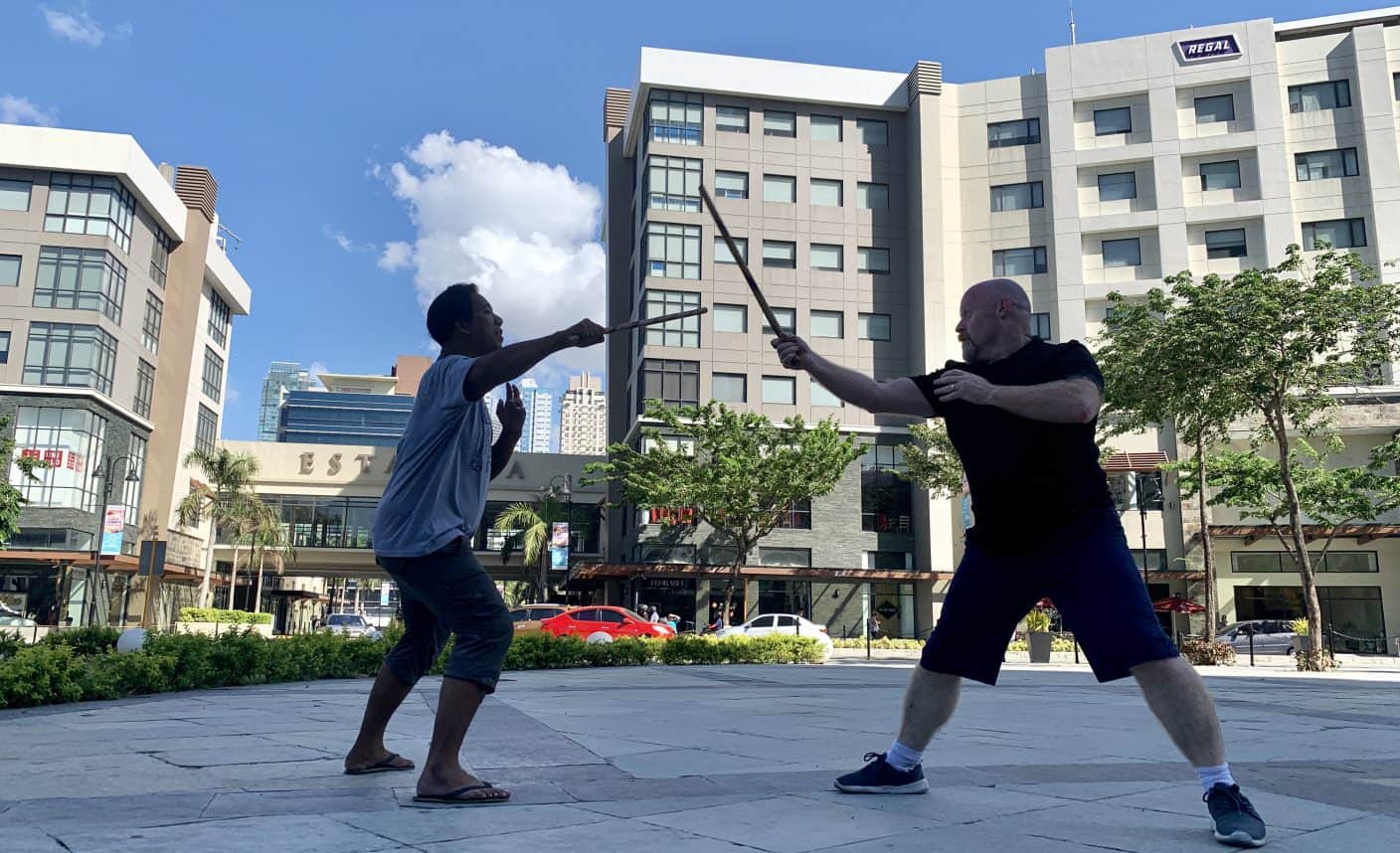 Abstract:
Martial arts are a complex, multi-dimensional practice, located in diverse socio-historical contexts, and irreducible to singular categories such as combat sport. Focusing on Capoeira and Eskrima, post-colonial martial arts that developed under Portuguese and Spanish colonial rule respectively, this paper offers selective insights into the landscapes of each art in which history is both remembered and forgotten, and respect is identified for both ancestral inheritance and innovation.
DOI: dx.doi.org/10.1515/phw-2021-17815.
Languages: English, German


In the history culture of martial arts, especially in post-colonial societies, myth-making, tied to national identity formation, creates a veil on the past. It is common to hear that Capoeira and Eskrima, martial arts that developed under Portuguese and Spanish colonial rule respectively, both survived their colonial regimes by being hidden in dance. Yet there is no Capoeira without ‘ginga’ (sway) and there is evidence for Eskrima being an adaptation of Spanish swordsmanship taught to Christianised Filipinos by Jesuit ‘warrior’ Priests to repulse a perceived Muslim pirate threat from the South.[1] In the search for identity, and history, language becomes a surprising ally.

Martial Arts are a multi-dimensional practice, constituted by the varied classes of phenomena (eg. technical emphasis, tactics, material weaponry, teaching methodology, philosophy, social hierarchy etc.) that construct the very existence of a given martial art style.[2] Such styles are inevitably culturally-historically located, emerging from complex socio-political contexts. The forms of martial art thus differ, sometimes dramatically, and are irreducible to simple definitions such as self-defence methods, or combat sports; and categories such as ‘modern’ and ‘traditional’ collapse under close scrutiny.[3] Despite this, Bowman has argued

that “Martial arts as a cluster of familiar ideas, motifs, images, and as a category has certainly achieved stabilization in contemporary discourses, even if it lacks both precision and a stable referent” (p. 58).[4]

Cautiously then, I will provide a brief introduction to aspects of the history culture of two particular arts, Capoeira (the Afro-Brazilian “dance-fighting” art), and Eskrima or Arnis de Mano (the Filipino national “stick-fighting” sport). In terms of appearance these arts would seem to have little in common. However, what may not be immediately obvious, is that both register traces of an historical connection with the Iberian world (as prior colonies of Portugal and Spain respectively), and offer particular insights into the post-colonial landscapes of their respective martial art traditions, in which history is both remembered and forgotten, and there exists within tradition a respect for inheritance and innovation.

Who Taught You the Beauty of Dancing in the Fight?

Capoeira is frequently described as an Afro-Brazilian martial art. The term Capoeiristas use to describe the art themselves is jogo (a game). The Jogo de Capoeira (game of Capoeira) in its contemporary form, is played to the pulsating rhythms of a berimbau (musical bow), atabaque (conga-like drum), and pandeiro (a type of tambourine). Originally developed by African slaves living in Brazil’s Senzalas (slaves houses) in the 1700s and 1800s, Capoeira has roots in West African courtship and war dances; and influenced the peacock-like break-dancing culture of the late 1970s.[5] When the berimbau calls, Capoeiristas stand shoulder to shoulder forming a roda (circle) within which the players enter to play the game. Those forming the circle keep cadence with their clapping. During the jogo each player attempts to use their malendragem (trickery) and malicia (cunning) to read and out-wit the other in a physical game of chess, in which only the hands, feet, and head are typically permitted to touch the floor. Games are a complex dialogue of powerful kicks and daring evasions, artful acrobatics and playful theatrics.

Adding further complexity to the jogo, Capoeira players must be responsive to changes in the rhythm being played on the berimbau, and listen carefully to the songs, sung in Portuguese (originally the language of the coloniser), being led by the Mestre (Master), that encourage certain actions in the game (such as the execution of a takedown), or make commentary, often humorously, on what is happening in the game (such as the suggestion that players are getting too close, or a game too heated, and that the combatants might need to find a bungalow, the historical equivalent of ‘find a room’). These ideas are often encoded in metaphor, and are missed by outsiders. Understanding develops among the young Capoeirista over time, as they become more familiar with the game and its rituals. The songs also carry the historical and cultural memory of oppression and the struggle for freedom, forming an important pedagogical tool in the shaping of a Capoeirista’s outlook and identity.[6]

Originally a game played by slaves on Sundays, Capoeira was sometimes known as vadiaçao (a word that directly translates as vagrancy or loitering, but is reinscribed within the art as something like ‘just messing around’). This concept is deeply embedded in the game, making it desirable to find the most beautiful, deceptive, and effortless route to the out-witting of your camarada (comrade), the correct reference for your opponent in the game, perhaps used in contrast to what would have been your real opponent or oppressor, the slave owner. Direct attack is rare, and is read as less skillful, unless executed with unexpected and unrivalled speed and precision. If you are to survive in this world, it should look like your oppressor walked into your leg, and not that you deliberately kicked them. In this regard, the defining characteristic of a Capoeira Mestre is mandinga, a word that implies ‘magical power’ and is exhibited through “bodily acts of deception and trickery.”[7] The mandigueiro (a term that would have once been translated as ‘witch doctor’ and means something like magician or wise-one), moves with Matrix-like power and insight, being able to deceive an adversary without ever “being caught open or exposed.”[8] It is the embodiment of maldade (wickedness), a capacity to be treacherous, and yet to appear the opposite. From the outside, the master’s mandinga may give their moves the appearance of luck, or a capacity to bend reality to one’s advantage, without exuding any obvious effort. Mandinga is learnt, rather than taught,[9] and represents the highest expression of the game, and a key marker of a skillful Capoeirista’s identity. Despite the Mestre’s possession of mandinga, there is a Capoeira song that celebrates that Capoeira’s ends are unknown, even to the wisest of masters, suggesting a respect for the expected and continued evolution of the art.

Within the landscape of Capoeira, the figure of the Mestre looms large in another way too, intimately connected with the idea of history, lineage, and respect for ancestral knowledge. There is a song lyric that translates “Boy, who formed you? Who taught you the beauty, of dancing within the fight?”[10] Here there is clear importance placed on knowing your roots, and giving thanks to those who have passed on this precious knowledge to you. This is not so much lineage as legitimation, as may be important in many East Asian martial arts, but hovers as a challenge to maintain a deep connection with, and sincere acknowledgement of, where your embodied knowledge has come from. Within the Capoeira community, your identity as a jogador (player) is forever tied to those from whom you have inherited your ability to dance in the fight. There is no (respectful) place for forgetting this.

The Filipino martial art of Eskrima (the local pronunciation of the Spanish word for ‘fencing’) is a practical form of combat with baston (sticks) and bolo (what might be called ‘working blades’ or cutlass-style machete), most likely arising from a unique synergy of elements from a lingering Sino-Malay martial arts cultural background, and an ingenious Filipino re-engineering of the geometric logic of Spanish swordsmanship for local weapons.[11] The early evolution of the art remains uncertain. What we can say with some confidence is that the process of development of the many forms of Eskrima[12] occurred over three hundred years of colonisation in which Jesuit priests taught swordsmanship to local warriors;[13] was refined through revolution and rebellion during struggles for independence; formalised in the pre-WWII period through the formation of sporting clubs; and finally, officially recognised in 2009 as the country’s national sport.

Among ex-pat Filipinos living in the United States during the Civil Rights era, it became popular to refer to the art as Kali, from an old Tagalog word (meaning “skill with blades”), as a kind of resistance to use of the Spanish loan-word Eskrima (which accurately implied the practitioner’s ability to wield a stick with the skill of a swordsman, but carried strong connotations of a colonial inheritance). Like Capoeira, language carries historical traces in this post-colonial martial art tradition, and while Kali practitioners may have desired to locate a pre-Hispanic origin for their art, they appear to have had little difficulty using Spanish terminology for many of their drills and sub-systems, Engganyo (feinting or deception), Numerado (by the numbers), Sombrada (a cover and counter drill), Espada y Daga (sword and dagger), Abierta and Serrada (open and closed guard positions), among much of the art’s lingua franca, despite one source claiming that during the colonial period the number of Filipinos who could speak Spanish apparently never exceeded 2.8% of the population.[14] Of course, this suggests a strong Spanish influence, still registered in contemporary forms of the art, as does the art’s official name, Arnis de Mano (literally ‘armour of the hand’), which most likely refers to the fact that the Eskrimador’s only armour during the Juego Todo (no holds barred) stick-fighting duels that continued into the early 20th Century, was the stick in their hand.[15] Another, frequent refrain, links the term Arnis to the costumes of actors in Moro Moro plays in which the Christianised Visayan warriors, wearing Arnes (armour), successfully repulse the Muslim ‘pirates’ from Mindinao.[16] Such plays reconstruct and repeat an historical conflict which continues to have resonances today.[17]

History gives way to myth rapidly within the Filipino martial tradition, as some Eskrimadors embellish stories of the past in order to claim prestige in the present.[18] It is common practice to rename the art in each successive generation, making genealogies complex, but providing legitimacy for innovation as a core aspect of tradition. Once taught mostly in families or villages, many Eskrima styles are treated like precious heirlooms, only to be shared with a trusted few, making their preservation an object of contemporary concern.

Researching the history of martial arts emergent from post-colonial communities presents unique problems beyond the separation of fact from opinion, or the establishment of a plausible account. Complex sensibilities must be navigated. As an Anglo-Celtic student of these arts, I remain mindful that I am a guest in these lands. Within such post-colonial (not to mention ‘globalised’) martial arts landscapes, historical origins may be uncertain, but methods have been passed down through the generations, without the disruption seen in Europe, where there is a return to Medieval and Renaissance manuals to rehabilitate lost Historical European Martial Arts (HEMA) traditions. Exploring martial history culture in the colonies presents an interesting point of reference for this work, given the visible legacies of these encounters between the metropol and the periphery; and martial traditions offer surprising insights into cultural values, identities, and histories.

The author with his Maestro Paolo Pagaling in Metro Manila in 2019 © all rights reserved by Robert J. Parkes.

Copyright (c) 2021 by De Gruyter Oldenbourg and the author, all rights reserved. This work may be copied and redistributed for non-commercial, educational purposes, if permission is granted by the author and usage right holders. For permission please contact the editor-in-chief (see here). All articles are reliably referenced via a DOI, which includes all comments that are considered an integral part of the publication.