Time and History (in) of the Grand Coalition 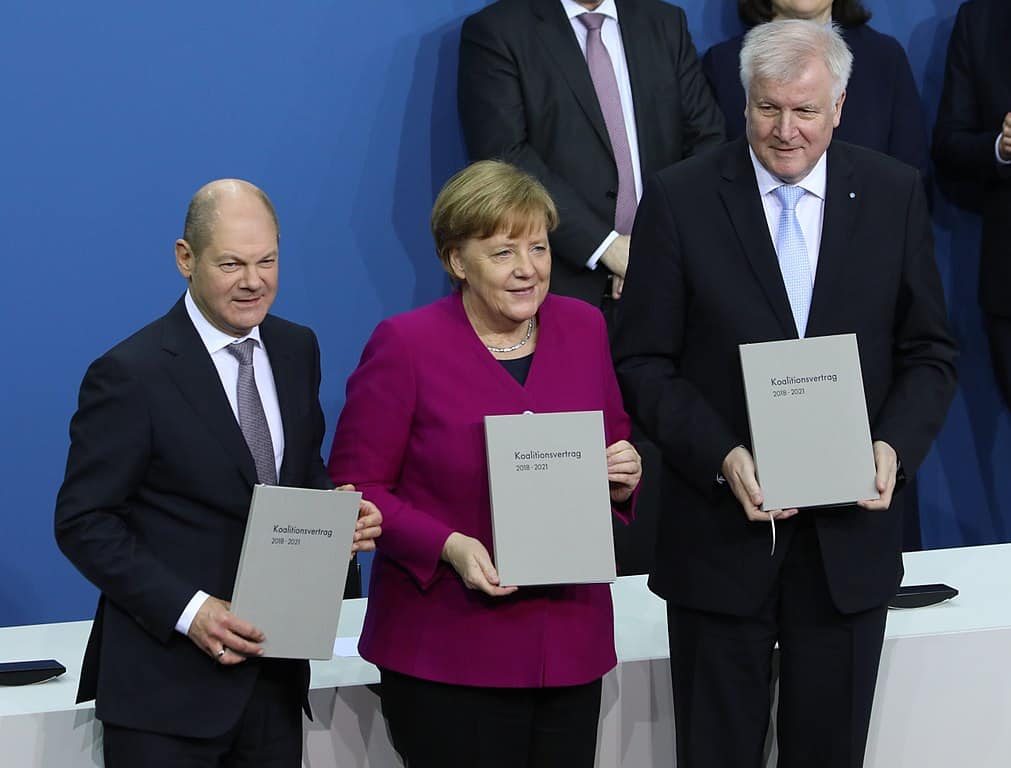 The agreement of the new German Grand Coalition which after intricate negotiations can now start its work has already undergone different analyses. It was analyzed in political terms, was closely examined with a view to so-called “future issues” and has already been made an object of interest as a linguistic-literary document.[1] But this coalition agreement is also noteworthy with regard to Public History – and to the historical classification of the present.

In the penultimate Position

It may not come as a surprise that the topics media, culture and attitude to the past appear in the penultimate position in the coalition agreement (chapter XIII), immediately preceding the descriptions of the rules of procedure and mode of operation of the coalition. That these issues do not have the same importance as the explanations on the social and environmental policy, on economy, on infrastructure or family may be understandable. The topic of culture is, however, put immediately after the explanations on the foreign and security policy, and thus not placed too far away from a crucial policy area (and the chapter of education and research has even taken quite a leap forward and has landed in section IV).

What is hereby said on the importance of the historical within the framework of the government work, can certainly be expected. The particular historical responsibility is referred to, the way it arises from the history of the 20th century and reduced to the well-known formula “Without memory no future”. Even though faced with a lack of content-related novelty, one may well pause for a moment and consider it to be noteworthy that issues of the public conveyance of history have managed to be included into the self-description of a future German Federal Government.

Thereby the explanations in fact become more concrete. The memory culture shall continue to be supported and the memorial work be promoted. Apart from the problematization of the National Socialism, the SED dictatorship shall also continue to be made a subject of discussion. It can be considered remarkable that even the post-colonial debate has had a certain impact on the coalition agreement since Germany’s colonial responsibility is also given attention.

But despite all these pleasing mentions, from the perspective of the Public History, one also still has to have the impression that the historical only then finds the necessary attention in public when it originates from the past century. The loss of a historical distance relationship can also be discovered in the coalition agreement all over.[2] The inevitable anniversary fuss which may neither be missing also gives witness of this. With the political blessing from the very top the following historical events shall be celebrated in the upcoming legislative period: 70 years of German Basic Law, 100 years of the end of the First Word War, 75 years of the end of the Second Word War, 100 years of Women’s suffrage, 100 years of the Weimar Republic, 30 years of the Peaceful Revolution and 30 years of German Unity.

But, in such a coalition agreement, historical topics, in fact, play not only a role in sections in which they are directly addressed. Each document of this kind is always also a form of self-historicization. According to discursivized argumentation schemata a certain policy can only be justified by its historical classification (and not by a divine order or the almost mystical insight into the overall interconnections of the architecture of the world or other variants). Correspondingly, “history” as a public issue does not only play a role in connection with the cultural policy, but also as self-foundation of the Grand Coalition as a whole.

The preambles of such agreement texts may definitely be given greater attention. Even if they are under the well-founded suspicion of serving as a means of largely disseminating empty phrases, they, against a discourse-analytical background, provide important insights into the (auto-historicizing) self-conception of the collective authorship.

Already the somehow cumbersome title of the agreement calls attention to a basic irritation and, on the other hand, there is an attempt to divide the agreement into epochs: Because much has obviously become mixed up, everything has now to be new: “A new awakening for Europe. New dynamics for Germany. New cohesion for our country”. And why does everything have to be new? Because we, thus the in politicians’ jargon readily used and also here applied empty formula, experience “new political times with various challenges for Germany”.

Already in the very first text line of the agreement thus “new times” and therefore the modernist standard argument are evoked which still had to provide a justification for all the innovations: We have now left the old world behind us, we will now departure into unprecedented “new times” and therefore also have to adopt totally new measures (which, upon a closer look, appear rather well-known). But just as in fashion the deeper meaning of the latest trend consists in being replaced by the next trend,[3] and just as in art each just proclaimed modernity has the purpose of serving the next following modernity as a negative contrasting foil, in exactly the same way the “new times” last for one legislative period at most.

The reference to the more recent (or more distant) past is completed by the expectable counterpart of a future perspective which puts forward the well-known keywords of growth, dynamics, security and progress. Thus, this coalition agreement itself gets caught between a past in which certainly not everything was bad, but which now calls for a ‘new awakening’ anyway, and a future version in which for everybody everything shall become better. This form of historical self-description does not only appear bland for the reason that the respective shaping of the future can already look back onto a very long past, but because with their linearity they seem to provide no alternatives at all.

Without any problems we are able to see through these pseudo-historicizing arguments – and yet cannot do anything against it. In a relentlessly prehistoric culture one’s own significance can only be justified by the fact that one at least claims to have left one’s own distinctive footprint on the imaginary linear timeline. It might be a possibility to reconsider and to change this very time model – also and just exactly by means of the historical sciences. This would unquestionably be a more laborious matter. It would neither be likely to take place quickly and unproblematically. But, it would offer the chance to give another importance to questions concerning time and history, in order to not only reduce them to ensuring identity forming which has to be put in question again and again, but to provide space for the temporality of people and culture in their complexity – and then perhaps to ensure another political self-conception which does not need to permanently concern itself with proclaiming new times and epochs. Then the empty phrases included in the coalition agreements could be thrown overboard as well.

Copyright (c) 2018 by De Gruyter Oldenbourg and the author, all rights reserved. This work may be copied and redistributed for non-commercial, educational purposes, if permission is granted by the author and usage right holders. For permission please contact: elise.wintz (at) degruyter.com.

Copyright (c) 2018 by De Gruyter Oldenbourg and the author, all rights reserved. This work may be copied and redistributed for non-commercial, educational purposes, if permission is granted by the author and usage right holders. For permission please contact: elise.wintz (at) degruyter.com.

« Bon Appétit: Food and Public History
Resistance to the National Narrative in Uruguay »