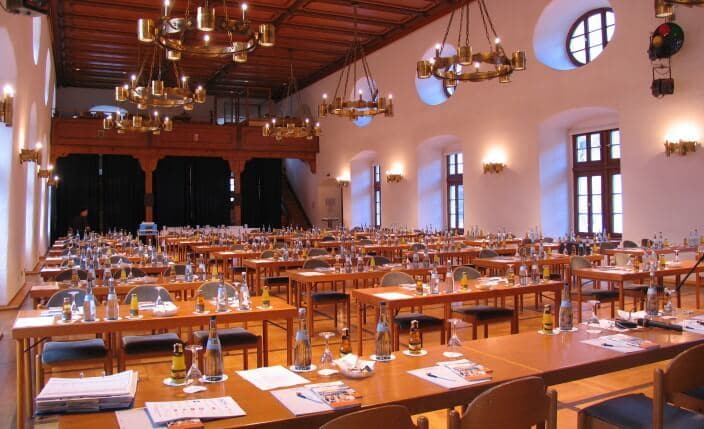 Abstract:
“Thank you for your kind introduction,” “Many thanks for your stimulating comments,” “Thank you for those further references,” “Thank you, I shall happily take up your suggestions.”—Thank you, thank you very much, thank you so much. Such empty phrases seem almost inevitable on the conference circuit. They are written into our academic breviary already from our earliest student days.
DOI: dx.doi.org/10.1515/phw-2014-2108.
Languages: English


“Thank you for your kind introduction,” “Many thanks for your stimulating comments,” “Thank you for those further references,” “Thank you, I shall happily take up your suggestions.”—Thank you, thank you very much, thank you so much. Such empty phrases seem almost inevitable on the conference circuit. They are written into our academic breviary already from our earliest student days.

But what exactly lies behind such formulae? Is it not commendable that colleagues treat each other with respect? Is it not welcome that one can do and say exactly as one pleases, as long as one remains undisturbed? Somewhat more heretically, expressions of gratitude at conferences could be said to reflect the secret wish to remain unruffled at the lectern, by leaving the previous speaker equally unperturbed. Yet this non-aggression pact touches on the very relationship with the wider public, that is, how one establishes the relevance of one’s subject within and beyond its cycles of reproduction, if it is established at all. That especially those disciplines with a strong theoretical bent tend toward encapsulation lies in the very nature of their language, but not solely. Considering a non-academic audience as addressable no longer seems self-evident in the humanities. Today, theory is seldom exported to other subjects or areas of life, that is, other fields of thought and methodological domains.

Recently, a memorable event occurred at a conference in Berlin on the historical functions of the humanities book. A young historian of science was giving a paper on various modes of theory. His historising account of certain thought styles at German universities impressed the audience with its pithy remarks, well-deployed visual aids, and elegant rhetoric. The conference was organised such that each paper was followed by a response. Most respondents routinely thanked the speaker, before launching into a talk of their own. On this occasion, though, something out of the ordinary happened. After lavishing some fatherly praise on the speaker, an elderly scholar of German Studies launched into a feisty diatribe against his younger colleague’s style. The older scholar extrapolated some juicy passages from the younger man’s previous essays, including one in which left-wing academics were said to be attracted to Niklas Luhmann, that “jet-set Christian Democrat,” like moths to light. Whereas such rhetorical distancing made pleasant reading, the older man maintained, it was barely appropriate to the subject. Now, one may wonder, is juicy, palatable prose at all admissible? Is there a place for metaphors, employed as ironic stylistic signals, in serious research? The “style police!” exclaimed a professor of history from Lucerne. Noticeably disconcerted, the incriminated young cultural studies scholar attempted to defend his partly feuilletonist style. Referring to his forthcoming book, he admitted that he had struggled to find an “appropriate” tone, which would have done justice to both the dignity of his (theoretical) subject and its anecdotal potential.

Although the older scholar’s somewhat clumsy criticism of style may seem outmoded, it nevertheless prompts discussion. Such exasperation about scholarly language leads one to wonder which types of intellectuals are active in German public life. There are those who have dropped out of academia, voluntarily or not. These include the likes of Roger Willemsen, who convincingly marries his hidden talent as a showmaster with intellectual prowess. Another example is Richard David Precht, whose urge to educate a wider audience is to the detriment of scientific accuracy, but whose broad appeal is unrivalled in the humanities. And then there are figures like Peter Sloterdijk who have strayed from the narrow institutional path and remain largely unknown outside academic circles. Some professors, like Harald Welzer, with a dedicated line to German feuilleton journalism now exercise their minds as diagnosticians of our times. But where in this spectrum are scholars specialising in German Studies or in the history of theory and ideas meant to position themselves? Which aims might they pursue? And, above all, which language ought they use?

The age of bourgeois book-learning has certainly come to end. Theory building, moreover, no longer seems linked to a political culture of experience as it was during May 1968. Does this divorce spell a definite retreat of the humanities to the intimacy of their own field, which has long lost contact with non-academia, because it no longer considers the relevance of its pursuits to those beyond its confines? Not even ten per cent of the turnover of state-subsidised non-fiction books is generated by book sales, as someone pointed out at the Berlin conference. So although the production of scientific prose has reached unprecented levels, it escapes the attention of the lay public. Given the sheer amount of academic publications, this need not be symptomatic of cultural decline. And yet it is doubtless absurd that quite so much is written for an anti-public, notoriously and unquestioningly.

What, one may ask, does this have to do with the self-gratifying reassurances traded between conference participants, which make such occasions resemble a nature reserve? A great deal. Because gratitude, as mentioned, can also amount to a tacit agreement on inaction.