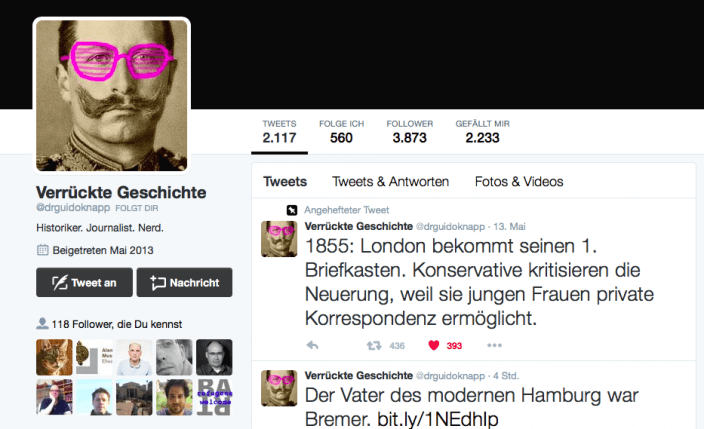 
“Weird History,” [Verrückte Geschichte] otherwise known as “Dr. Guido Knapp,” is a pseudonymous German-speaking Twitter account. Launched only a few years ago, the account has been presenting history-related knowledge and surprising historical facts to wide acclaim, with great public reach, and in a highly amusing fashion. “Weird History” is a prime example of frequently invoked “Digital Public History.” Reason enough for Public History Weekly to explore this mysterious and yet public phenomenon.

In what follows, we hear a surprisingly young man comment on an astonishingly mature and innovative project. The interview took place via Skype Chat on 5 December 2015. Although the interviewer and interviewee could see each other while talking, the Q & A below was minuted from the start. It was agreed that the interviewee’s identity would be kept secret, a policy that we ask readers to understand. The interviewee describes himself as a “Historian. Journalist. Nerd.”

The chat postings forming part of a response have been collated, but marked with ellipses to indicate omissions.

“Weird History”: I’m a great fan of Rainald Grebe.[1] He once wrote a song about Guido Knopp[2] that I liked a lot. And then, on holiday, thinking about my account, a pun suddenly occurred to me. Knapp [brief] = Knopp. History on the Web = Twitter … Somehow it fit.

MD: So it’s not meant that ironically after all. What do you make of ZDF-Zeitgeschichte (“ZDF History”)?[3]

“Weird History”: Quite honestly, I haven’t given it that much thought. I didn’t think anyone would actually be interested … I’m still slightly addicted. We’ve all spent Sunday afternoons watching it … Much of it strikes me as too superficial, too tabloid, too sensational — and yet admittedly ZDF has contributed a lot to history education, to conveying history to a wider audience.

MD: So what about your Twitter avatar: Should we see this as Emperor William II of Prussia through rose-coloured glasses?

“Weird History”: Well, a graphically talented friend of mine cobbled that together for me in two minutes. It’s meant to suggest that I take history with a sense of humour … Which I thought Guido Knopp was lacking.

MD: Cue “anonymity.” Is it important? Are you afraid of conflicts with your employers, present and future?

“Weird History”: Anonymity was hugely important right from the start. For two reasons: first, if I’d used my real name, I’d have had all my journalist friends on my tails — I wanted to discover if I could build a fan base solely on content. Second, I actually didn’t want my tweets to be linked to what I do professionally, namely, very serious history journalism. Now I don’t see things quite as narrowly anymore… And as for future employers: it’s actually an asset to have a successful Twitter account.

MD: I’ve tried to find your first tweet. Do you know when you posted it and what it was about?

“Weird History”: [#berühmteletzteworte: “They couldn’t hit an elephant at this distance,” John Sedgwick, Union Army general in the American Civil War, 9 May 1864.] … Like so much else, this tweet was a byproduct of my daily work. … I found it witty, but it didn’t fit the text I was writing at the time. So I dumped it on Twitter.

MD: So Twitter as “Steve’s Surplus Sale”? A One Dollar Shop (laughs)

“Weird History”: It’s no coincidence that my account is so full of humour. Traditional media struggle with humour. … Yes, I call it my Twitter dump (laughs) … But I still try to maintain certain basic standards. For instance, no tweets without sources. There’s a lot of rubbish out there.

MD: What prompted you to start “Weird History”?

“Weird History”: A former office-mate and I used to shares funny pieces and “the fruits of our reading.” Then he quit, and I asked myself, “Why don’t I just put this stuff on the Web?”

MD: You seem to invest a lot of time in your Twitter account. Also because you’re very communicative. How do you balance that with your work demands and your private life?

“Weird History”: Actually, it’s not as time-consuming as it seems. I simply go through life with a Twitter dredge. … And as a journalist I’m on Twitter anyway. … Besides, most of my friends are journalists, and they get the point. 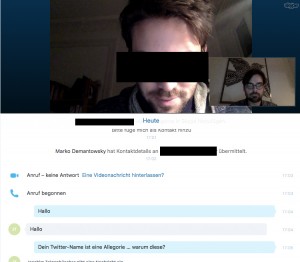 Screenshot from the interview from Dec 5, 2015

MD: Let’s turn to content, to your Twitter activity. You seem to draw on a huge collection of anecdotes, images, sources, citations … or are these merely birds that come flying?

“Weird History”: Well, a lot actually just comes flying. Sometimes, though, I consciously delve into the undergrowth of Google Books to sniff out something. Particularly when I get wind of a current event — for instance, today’s “refugee crisis.”

MD: If you do a bit of self-analysis: are the sequence, selection, and formulation of your tweets sheer coincidence, or is there an underlying concept of sorts, however rudimentary?

“Weird History”: After two years of trial and error, I’ve got a rough plan: I only tweet what I don’t know myself; I tweet what has amused or surprised me. I try to establish some kind of mixture — so I don’t just tweet anecdotes about beer wars and deranged despots, but occasionally also facts about current affairs.

MD: You mentioned the response to the “refugee crisis.” What else moves you? Where would you locate your historical standpoint? … Do you see yourself as a kind of “fun guerrilla” of German public history?

“Weird History”: Yes, that’s right. I want to torpedo our self-image. … For instance, equal opportunities for women in Germany. … If Islam is accused wholesale of misogyny, I post tweets reminding readers that the Federal Republic only introduced an Equal Opportunities Act in 1957. … Which the churches rejected by the way. Mostly, though, I devote my time to the “weird history” and mad stories concealed within everyday life. I’ve tweeted about stop signs, just as I have about Pizza Hawaii, which was invented in Canada. By a Greek (laughs).

MD: So there’s no secret personal archive that you use as an echolocation system? It’s always ad-hoc research or mostly your work-related projects that lead you to information, images, and evidence that you use for your “weird history”? Well, all told, your tweets appear very regularly and in quick succession!

“Weird History”: My “secret history” is a long list filled with the fruits of my reading. Fortunately, I read a lot — and even get paid for it, at least partly (laughs). For instance, I was recently researching the history of refugee camps. … The result was a very successful tweet about German refugee camps in Denmark.

MD: It seems to me that you’d win every television quiz hands down with your general knowledge …

“Weird History”: Well, as it happens, I have (laughs). I’ve got a soft spot for Trivial Pursuit.

“Weird History”: Good question. First, I love Twitter. Second, I found it tempting to just have to write 140 characters. … A blog, though, is in the works.

MD: What do you make of re-enactment projects?

“Weird History”: You mean medieval markets? … I lived in England for some time, where there’s a very active scene (and where Second World War re-enactments are hugely popular). I’ve always found re-enactments amusing, but can’t really tell how they improve our insights into history.

“Weird History”: I liked having those projects that caught my eye, especially Digitalpast, on my timeline. … Dramaturgically, that worked out fine. Suddenly, I was “in history”. Even if at the time some of these projects just went with the general, trivial Twitter flow.

MD: And one question you can’t be spared: what were your history classes like at school? Do you think they influenced how you deal with “history” today?

“Weird History”: The influences were very different. … In Grade 7, I had a hugely impressive history teacher — because he could tell stories. … His approach wasn’t modern, but it was definitely extremely effective: he stirred my interest. And, as time passed, my demand for analysis grew. … The strongest influence, though, was doing a history degree in England. … It taught me that history can be well-founded and still “entertaining”. … That one should aspire to make one’s knowledge and insights accessible to laypersons. And that one’s allowed to laugh now and then.

MD: Well, we’re slowly coming to an end. What’s next? What are your plans?

“Weird History”: I want to launch a “Weird History” blog before the end of the year, so I can work out some stories in more detail. And there might even be a book project. But I can’t talk about that yet. … But I’ll certainly stick to history.

MD: What interests me in this respect: how does one turn a gift like yours into money? How can one make a living this way, or rather how does one fund Open Access “history”?

“Weird History”: Currently, I’m subsidized by classical print journalism. I don’t earn any money with “Weird History” (not that I ever intended to). … I simply sense how much interest there is in historical topics. …But I haven’t yet come up with the masterplan.

Oh, by the way

MD: What would you say if I got a student to analyse and interpret “Weird History” … What would happen? What would be your working assumptions if you were wearing that student’s shoes?

“Weird History”: Now, you should definitely do that! I’d try to find out why some topics do better than others. I suppose that especially those tweets that capture the essence of our times strike a chord…. That my followers seek to discover their own times in history. Just as I do, probably. … And if your student is particularly clever, in the end he or she’d know that I have favourite sources, which I rummage through regularly… I’d definitely be interested in the findings! Particularly because I don’t analyse my account; I’m just happy to keep it going.

MD: Thanks so much, honestly, for this enlightening chat! I sincerely wish our readers who are reading this on Christmas Eve a very “Merry Christmas”. Please spare a moment to think of all those who are suffering from cold and hunger, or who must fear for their lives. Do so with a warm heart.

“Weird History”: Thank you very much!

« What is a “worthy” test for History?
Defining History as a School Subject »