Why We Still Need Textbook Commissions? 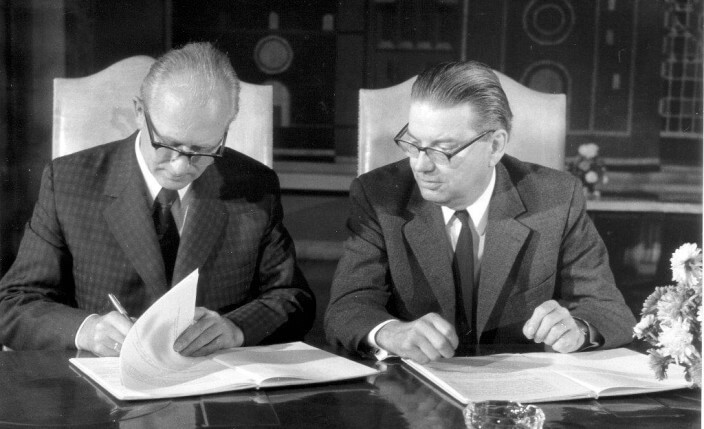 Abstract: In general, textbook commissions reflect the needs of their times. In the past, they quite successfully served their purpose of mediating between politics, research, and teaching. They played a highly relevant role in the international dialogue initiated and continued by nations once longstanding enemies. These achievements are both considerable and noteworthy. Today, however, textbook commissions are seemingly absent in public discourse. Their proceedings are virtually invisible and their members are seen mainly during national and public holidays.
DOI: dx.doi.org/10.1515/phw-2015-3861.
Languages: English, Deutsch, Polski


In general, textbook commissions reflect the needs of their times. In the past, they quite successfully served their purpose of mediating between politics, research, and teaching. They played a highly relevant role in the international dialogue initiated and continued by nations once longstanding enemies. These achievements are both considerable and noteworthy. Today, however, textbook commissions are seemingly absent in public discourse. Their proceedings are virtually invisible and their members are seen mainly during national and public holidays.

The original textbook commissions were established after World War I. Their initiators were teachers’ and historians’ associations in different European countries, which collaborated both at the bilateral level (within national textbook commissions) and at the international level (for instance within the International Committee for Intellectual Cooperation of the League of Nations).[1] Their work focused on the search for textbook and teaching contents that had promoted enemy images responsible for hostilities and antagonisms between the nation-states and that might have impacted the thinking of school students and future citizens. While teaching plans and curricula were carefully analyzed, the first revisions of textbooks were introduced in Scandinavian countries; similar initiatives followed in France and Germany.[2] The German-Polish textbook proceedings began in the second half of the 1930s with the Nazis already in power, which was less than optimal for such talks. The outbreak of World War II put an end to this textbook initiative altogether.[3]

A brief history of the German-Polish Textbook Commission

An international discourse on textbook contents resumed at the end of the 1940s and at the beginning of the 1950s. During the first decades after WWII, talks were limited to Western European countries. One of their initiators was Georg Eckert and his Institute for International Textbook Research in Braunschweig (which has existed in its current form since 1975), which became the key institution for the international coordination of various textbook commissions.[4] An exception remained the German-Czechoslovakian textbook talks: although initiated already in 1967, they were soon discontinued for a decade as a result of the brutal clampdown during the “Prague Spring” in 1968.

West Germany’s new “Ostpolitik” (Eastern Policy) had a considerable effect on the beginning of the textbook talks with the People’s Republic of Poland. This breakthrough in German foreign policy led to the establishment of the German-Polish Textbook Commission (which consisted of expert historians, history teaching specialists, and textbook authors). The Commission came into existence under the aegis of UNSECO in 1972 and devised “textbook recommendations” that were published in Poland and Germany in 1976. These recommendations provoked intense controversies, particularly in Germany, and required significant compromises. The German-Polish Textbook Commission prepared a protocol of differences, which marked a huge success under the conditions of the Cold War. In the following years, periodic expert conferences took place and dealt with the most controversial issues.

The Textbook Commission in crisis

The annus mirabilis of 1989 created a new situation and fresh challenges. The breakdown of communist regimes in Eastern, Central, and Southern Europe imposed new modes of communication and changed the composition of the textbook commissions. Poland was a case in point. Even though new textbook commissions emerged, including the Polish-Israeli and Polish-Lithuanian textbook commissions, inter-commission contacts and cooperation were and still are very limited. Besides, their proceedings and work are almost unknown to the wider public. Nor is there any visible impact of these commissions on school curricula and textbook contents. Moreover, the German-Polish Textbook Commission seems to have entered a phase of insignificance, as it concerns itself mainly with administering its historical legacy. The formula of bilateral talks appears to be old-fashioned and unsuitable for meeting new challenges. Although several textbook conferences have been held in recent years, they have dealt neither with textbook revisions nor with any relevant didactic issues. On the contrary, these conferences have been pure expert occasions, organized by experts for experts, and have lacked any wider exploration of the issues at hand with other researchers, teachers, and publics.[5] Formally, the German-Polish Commission supervises the German-Polish history textbook project. However, this ambitious project still seems to be in its infancy and fails to resonate with the larger public. Surprisingly, the project has not enhanced the visibility of the German-Polish Textbook Commission in the media and among the broader public.

Political support being strong enough, the German-Polish history textbook project will definitely see the light of the day, sooner or later. Nevertheless, there is no guarantee that the textbook will have any relevance for school teaching. Notably, the German-Polish Commission has been unable to formulate any innovative ideas for history teaching in schools, for the significance of history in school curricula, and for the role of the public sphere in Poland and Germany regarding these issues.

The situation of schools in Poland and Germany is dynamic, and significant changes are underway. Polish school students will soon receive their first digital textbooks.[6] Similar innovations are also taking place in Germany. However, the question remains whether schools and teachers are really prepared for the changes ushered in by the digital age. Are revisions of textbooks perhaps obsolete? And yet the example of the German-Russian textbook on the history of the 20th century (aimed at teachers and students) shows that the debates on school curriculum and textbook revisions are still topical and relevant.

The analysis of textbooks remains a relevant task and a pressing challenge at the same time. Nevertheless, it appears mandatory to radically reform the working methods of the textbook commission. The bilateral formula played an important role in the past, but today’s challenges require new institutional solutions. One possible innovation could be the establishment of a multinational textbook commission, because many controversies in national historiography result from ignoring multinational insights. A further change might be the better inclusion of teachers, publishers, and pedagogy experts in the commission’s debates. Last but not least, transparent und public debates on the purpose of textbook commissions, their goals, working methods, funding, and their impact on school teaching are not only welcome but indeed necessary.

The Foundation of the  German-Polish Textbook Commission by Władysław Markiewicz (Poland) and Georg Eckert (West Germany) at 1972/10/17 in Brunswick, © Georg-Eckert-Institute for International Textbook Research (with special thanks to Dr. Thomas Strobel).

« Why Historical Narrative Matters?
Digital Public History: Bringing the Public Back In »